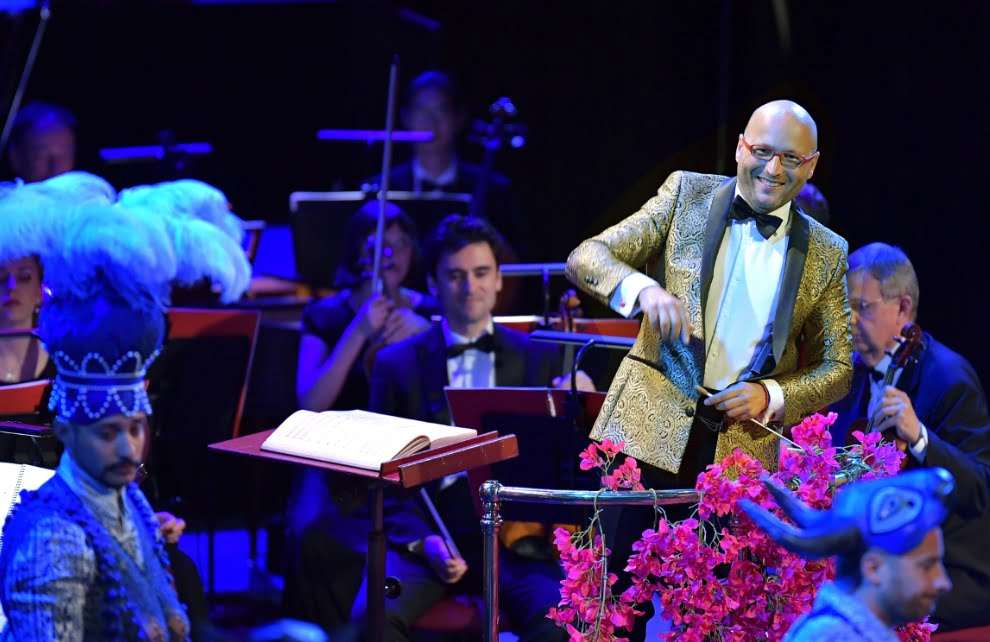 Surprisingly, this was the first complete Proms performance of Rossini’s indestructible version of Beaumarchais’s comedy, possibly a reflection of the fact that Glyndebourne hasn’t mounted it for three decades.

This year’s visitation from East Sussex was very much a semi-staging, making do with vestigial props and a collage of Joanna Parker’s Mediterranean-flavoured designs forming a frieze round the back of the platform. Otherwise it was all down to her costumes, a mish-mash of gussied-up traditional flamenco and 1960s’ pop styles for Rosina, the Count and Figaro, and tweedy suits for Dr Bartolo and Berta. 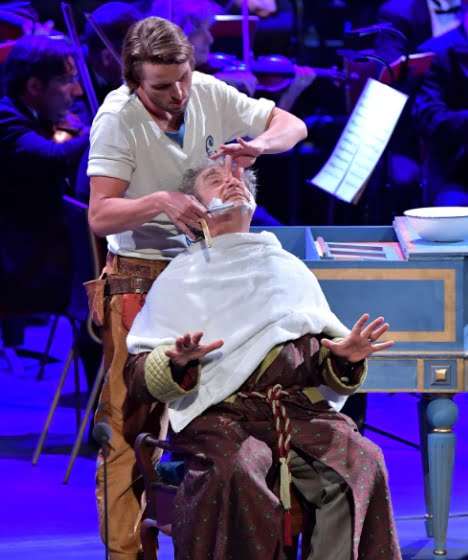 Presumably the movement from Annabel Arden’s full staging came to the Proms more or less intact and accounted for the lion’s share of the stage-craft. The production had a mixed reception, but the cast, chorus, stage-hands and extras kept the audience focused on the comedy – no mean feat given the difference of scale between the Glyndebourne venue and the Royal Albert Hall.

There was an over-reliance on exaggerated camp posturing in the big ensembles, alongside a great deal of banter between the conductor, orchestra, singers and audience – fourth wall-breaking stuff that became less funny as the evening progressed. The men’s chorus dressed as a platoon of policemen in toy-town uniforms and a trio of bizarrely dressed dancers reminded that this is a production in larky, audience-friendly Glyndebourne style, self-consciously at the broad-brush end of the spectrum but with enough character definition among the leads to hook you in.

The staging, though, makes no bones about the fact that Rossini’s barber (Figaro) is the main focus, and the German baritone Björn Bürger easily assumed the mantle of Seville’s Mr Fix-It in his commanding portrayal. Tall, darkish and handsome, he has a naturally lithe presence filled out by an athletic, resonant voice and effortless technique. Despite some punishing speeds and quick-change tempos, he projected ‘Largo al factotum’ with graceful precision while radiating good cheer, and he was an engaging comedian. 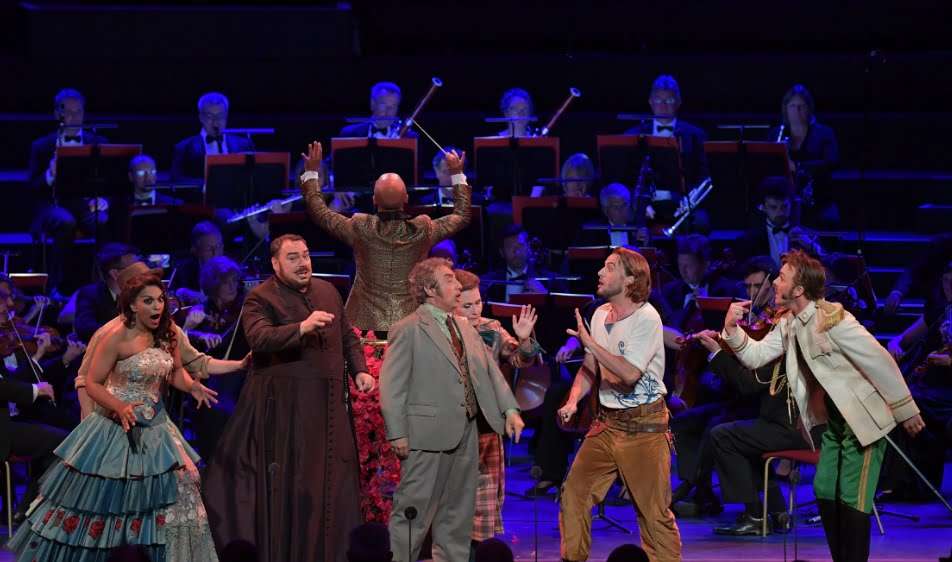 The American tenor Taylor Stayton presented Count Almaviva as a Sixties pop-star in a ludicrous silver-lamé coat. Also tall and good-looking, he took the Count’s impersonations of drunken soldier and priestly music teacher in his stride, and he is blessed with a beautifully regulated voice and a natural, expressive refinement.

His magnificent coloratura showed up Danielle de Niese’s more fluid approach, so that you missed the ‘ping’-factor that gives Rosina’s music its vivacity. While her voice has softened and darkened since the heady days of her Cleopatra in Handel’s Giulio Cesare a decade ago, volume has dipped noticeably in her lower register. There is, though, no change in the sheer voltage of her mischievous, provocative presence. She was given an extra aria – ‘Ah, s’e ver, in tal momento’, sung just before the storm and Rosina’s rescue in Act Two, which showed off her vocal warmth and lyricism, and which, incidentally, she performed almost concealed from view by the conductor’s rostrum. 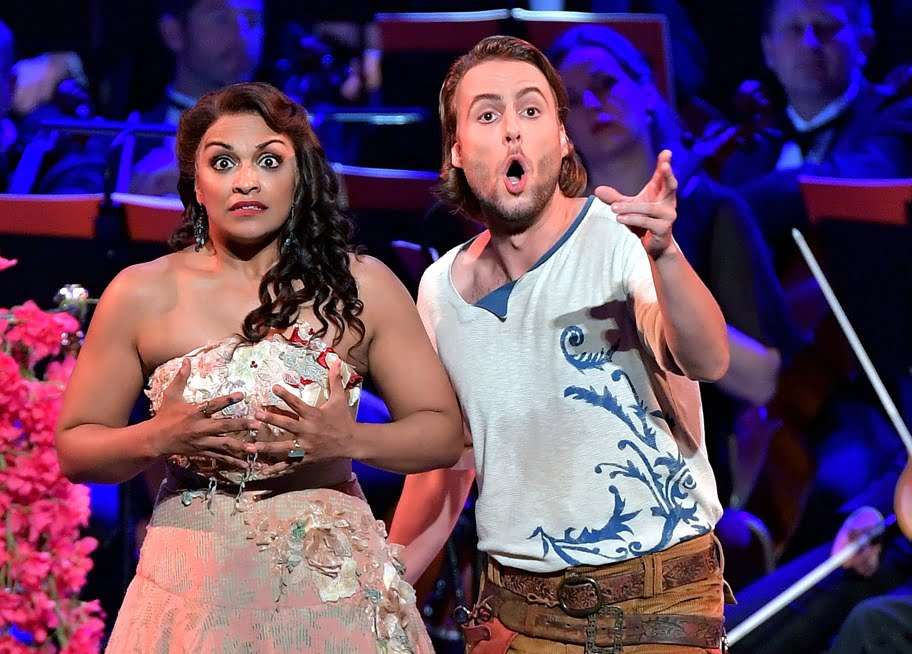 Alessandro Corbelli’s Dr Bartolo was a masterclass in bluster, outrage and comic timing, sung with the sort of easy spontaneity that enhances rather than distorts the music. Christophoros Stamboglis delivered a wonderfully venal Don Basilio, sung with comic panache, and the hellish fumes billowing from beneath his priestly cassock while he performed ‘La calunnia’ caused great amusement. Janis Kelly proved as nimble a dancer as singer in her aria, and even though it is Berta’s only big vocal outing it brought the house down. You also wished that you’d heard more of Huw Montague Rendall’s attractively sung Fiorello.

Despite all the extra, participatory demands put upon Enrique Mazzola and a compact London Philharmonic, the bright vital orchestral detail, which underpinned the bel canto style with great musical perception, was a continuous source of delight, and Mazzola never pushed Rossini’s famous crescendos to make them sound forced.