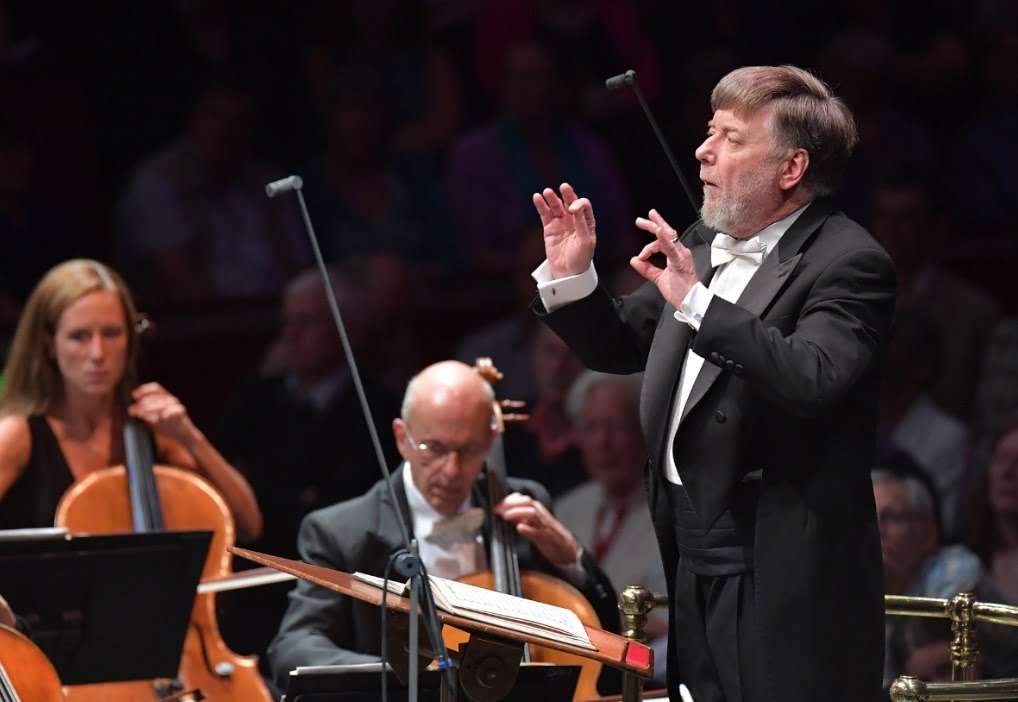 Anthony Payne, who elaborated Elgar’s sketches for his Third Symphony, turns eighty on August the Second. In recognition of this milestone, the BBC has commissioned him for a fifth time, similarly for something large-scale and orchestral. Following The Spirit’s Harvest, Time’s Arrow, Visions and Journeys, and The Period of Cosmographie, Payne now adds a choir for his first chorus-and-orchestra work.

During its composition, Payne thought Of Land, Sea and Sky as a “symphony of illusions”. He was unable to find many texts to suit his purpose and those that did would require filleting to match his already determined musical design, something Payne was unwilling to do, so he wrote his own. The illusions Payne has in mind, some with him for a very long time, involve those from film, literature and painting as well as those he has directly experienced.

Musically this results in a nearly-30-minute score that embraces Payne’s love of English Romantic music and his fascination with the advances made by European modernists; the latter including Roberto Gerhard, Ligeti and Lutosławski. I imagine that Payne will look kindly upon my finding a kinship with Frank Bridge to represent his English Romantic side in this latest work, and maybe Schoenberg’s rigour is to be heard in how the chorus is employed, words clearly discernible, and musically showing an affinity with Tippett’s A Child of Our Time in its narrative and, early on, with Britten’s War Requiem. The use of the orchestra tends to be more active and colourful, such as the use of rhythmic percussion, whether military and bass drums, cymbals and bell, with timpani not required.

The eight sections play continuously and include a ‘Prelude’ and ‘Postlude’ of similar invention, an ‘orchestral intermezzo/scherzo’ and prose that embraces ‘Horses’ (those of the Camargue that may be seen as galloping on water), ‘Clouds over Somme Valley’ (which can be interpreted as the smoke of battle) and ‘Cliff Turned Cataract’ (“towering cliffs” that are “heaving waves”). 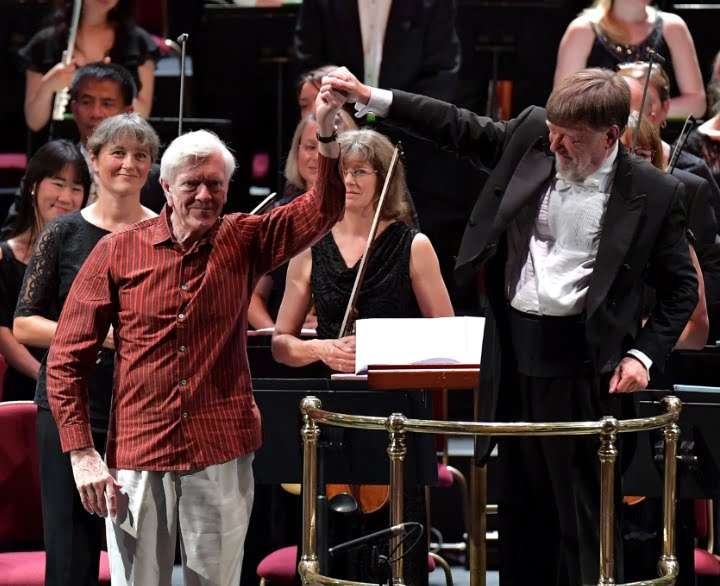 Although the end is to be heard in the beginning (we were to find out), the music makes progress yet is unified and with tensions rising (Morse-code-like trumpet calls) and falling logically, plain-speaking in terms of the word-setting and with much that one wants to hear again alongside, no doubt, new discoveries. Andrew Davis, a Payne champion, led a premiere performance of excellence.

Earlier in the evening Andrew McGregor had introduced the first of this season’s Composers in Conversation (new title, same format). It’s a new location, too, if not as inviting as the previously used Amaryllis Fleming Concert Hall in the Royal College of Music. Furthermore no sheet of information was made available of artists and repertoire, as had been the case in preceding years, essential for bods like me. I did ask two of the Imperial stewards: one had no idea what I was talking about, the other responded with a curt “no”. Fortuitously paths were crossed later with Andrew who was able to answer my queries, otherwise this review would be incomplete artist-wise and wrong in a named work. Pieces of paper next time please, BBC Proms office.

McGregor and Payne’s exchanges were animated and interesting. The music was good, too, as were the Guildhall School performances. Payne’s Horn Trio (2006), written for a senior wedding anniversary, is very attractive in its lyricism, always expressive even when increasing in momentum and strength, although over its eighteen minutes a tendency to slowness did outstay its welcome. The aptly named Matthew Horn played superbly, with or without mute, and was matched by his colleagues. Dylan Perez remained to partner Tobias White’s ample-sounding cello in the wholly impressive Out of the Depths comes Song (2008), a ten-minute gem – its start delayed by someone’s ringing mobile – a deep and restless piece made up of short sections that return, not as a palindrome for the order is different to that of the outward journey.

The Prom itself opened with Tchaikovsky’s The Tempest, not his greatest music, and with quite a lot of Lisztian influence, if full of atmosphere, suspense and vivid characterisation. Andrew Davis whipped up a veritable storm and shaped the poetic passages with affection. The BBC Symphony Orchestra, whether scene-setting, forceful or deft, was on top form. 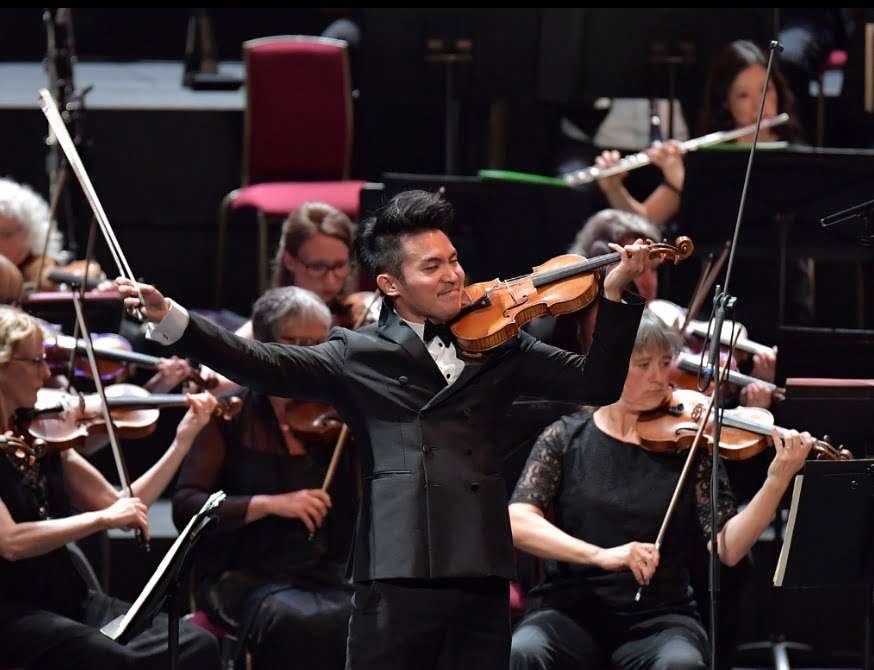 Following the interval, Max Bruch’s First Violin Concerto – again. Ray Chen played with ardour, generally rich tone (although his thinner top register isn’t so appealing) and gusty attack, but this palled quite early on given the oodles of smothering vibrato given to every note. Intonation and poise weren’t above suspicion, either. When the repose of the slow movement was reached it was distracted from by a steward marching down the aisle (only doing his job) to tell someone not to film the performance – the regular recorded announcement for phones to be switched off hadn’t been aired. The Adagio was on the weepy side though and the Finale a bit punchy. The greater pleasure came from the accompaniment, subtle and intrinsic. Chan seems to be trying to emulate the great violinists of the past (Heifetz, Milstein…) and although he may have the technique so to do, as his Paganini encore showed, this yesteryear aspect was too consciously applied to the Concerto.

Having heard this ‘everyday’ music, quite a few in the audience departed, not interested it seems in twelve minutes of relatively rare Vaughan Williams. Toward the Unknown Region (completed in 1906) finds the composer under the shadow of Parry if looking ahead to the already-started Sea Symphony (which also sets Walt Whitman). The solemn opening grabs the attention, the music, including the use of two harps and an organ, becoming radiant and ocean-going in effect, an upward curve to a real sense of arrival, sung and played with devotion under a seasoned conductor of this composer, and not forgetting a few bars of ravishing string-quartet-playing. The shortest work of the concert was a well-planned pay-off.