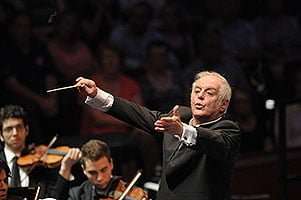 The first false-start of the Olympics triggered shortly after 6.30. The West-Eastern Divan Orchestra rose, the audience applauding, to greet Daniel Barenboim, who duly failed to appear. Much nervous laughter ensued. The Hall was packed and the Arena bursting at the seams. A keen sense of anticipation was palpable by the time Barenboim did make his entrance for Beethoven’s ‘Choral’ Symphony – crowning the first complete cycle at the BBC Proms under a single conductor since Henry Wood in 1942.

There’s a reverence about how Barenboim is received and he conducts Beethoven with a similar veneration. His Beethoven is viewed through the twin lenses of Wagner and Bruckner; unsurprisingly, he aligns himself firmly to the Furtwängler tradition, which is valid enough if you have an orchestra capable of the granite-like sound required, such as from Staatskapelle Berlin on Barenboim’s previous recorded cycle; Barenboim and WEDO have a new Beethoven set on Decca. 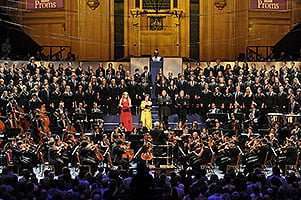 The strings made a tentative start to the first movement and there were some messy wind chords in the exposition, as Barenboim set out his stall for a meandering journey. The size of the orchestra is larger than we expect these days for Beethoven and I doubt if doubled woodwinds are what the composer really envisaged, even in the vast expanse of the Royal Albert Hall, and there were times when articulation became blurred. On the plus side, violins were antiphonal, Barenboim focusing on the seconds to bring out counterpoint nicely. The scherzo went a little better, though there wasn’t too much Molto vivace about it. The eight double basses impressed most here, giving furious attack, and the timpanist used harder sticks, which helped. Barenboim was at pains to highlight certain points in the score, underlining them in red ink, as it were, an example being the way the second violins, leading the repeat of the first theme, played at a whispered triple pianissimo. He also tends to put the brakes on when wanting the orchestra to play quietly, meaning the music lost almost all sense of momentum. The Adagio suffered most in this respect, sweet strings and hushed intensity aside, almost grinding to a halt. 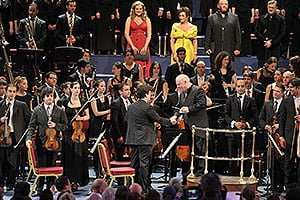 Few people speak with more eloquence on the Arab-Israeli situation than Barenboim and I greatly admire his endeavour in forming the West-Eastern Divan Orchestra. But, I largely didn’t get on with this ‘Choral’ … until, that is, early into the finale. Following the orchestra introducing reminiscences from the previous three movements, Barenboim introduced a terribly long pause before ushering in the ‘Ode to Joy’ theme on a mere thread of sound from cellos and double basses; it was barely audible and mannered conducting. Suddenly, Barenboim galvanised himself, urging the violins to sing out the main theme and events finally became airborne. The final injection of adrenaline was administered by René Pape, in a declamatory intervention delivered in magisterial voice. The rest of the soloists were mixed; Anna Samuil had a stridency which didn’t always sit well with the rest of the quartet, but Waltraud Meier blended well and sang with poise. Michael König, standing in for an indisposed Peter Seiffert, was excellent, especially in the martial episode with Turkish percussion.

Pape apart, the outstanding contribution came from the National Youth Choir of Great Britain. Singing without scores, its members were arranged seemingly at random – no blocks of sopranos, altos, tenors and basses – standing shoulder to shoulder, presenting a solid, unified sound. Occasionally, the sopranos were a bit stretched, but the choir provided a fervent climax, matched by excitable playing from the orchestra. A bit late in the day, but the sprint for the finishing line was well judged, bringing Barenboim’s rather uneven cycle to its conclusion, before a quick dash across London to carry the Olympic flag … all in a day’s work.