“In its 50th-anniversary year, Doctor Who returns to the Proms with a spectacular concert featuring Murray Gold’s music for the series, plus pieces by Bach, Bizet and Debussy, and a special performance of one of the most iconic theme tunes in television history. Performed by the BBC National Orchestra of Wales conducted by Ben Foster, the Prom includes a host of alien friends and foes plus a very special appearance by Matt Smith.” [BBC Proms website] 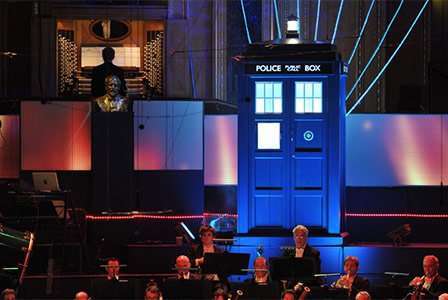 We’ve been here before – in 2008 and 2010 – when two of the BBC’s biggest brands, the Proms and Doctor Who, collide together in the Royal Albert Hall. In 2008 David Tennant had to beam his presence in from Stratford (where he was under contract with the RSC as Hamlet). New Doctor, Matt Smith, popped up for 2010. This year – celebrating the 50th-anniversary of the first broadcast of Doctor Who (23 November 1963 – the day after John F. Kennedy’s assassination) – we had two Doctors as, greeted by an audible gasp of recognition from a packed Hall, Peter Davison was a surprise guest.

We saw all eleven doctors (or even twelve, of which more anon) on the many screens dotted around the hall – each cheered to the hilt, depending on your favourite (I joined in for Patrick Troughton), and both a tribute to his most recent companions (since the 2006 revamp) and also various references to what Davison tells us we can now refer to as the “Classic Series” – that is from the first twenty-six years, and Doctor Who The Movie from 1996 (with Paul McGann as his sole outing as the eighth Doctor – or 008, in the new parlance). (We shouldn’t forget Peter Cushing, an earlier celluloid Doctor, if not part of the BBC’s clan.) A less-recognised guest, given that it’s nearly fifty years since we’ve seen her, was Carole Ann Ford, who played William Hartnell’s – the first Doctor – granddaughter, Susan, his first companion. She quickly won the audience over with the revelation that when the original cast was introduced to the Daleks for the first time, they were only the bottom half of the metal monsters, and that they should not be used as dodgem cars, as there was no money for replacements. 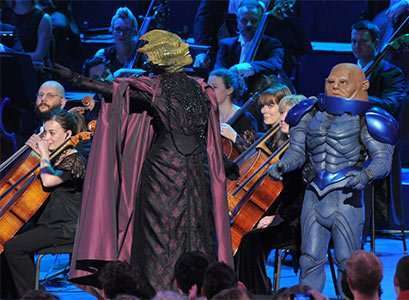 And then there were the monsters. For us veterans of Doctor Who Proms we knew what to expect, but the power of his enemies is just as rejuvenating as The Doctor himself. New this year were The Whisperers, with their white faces and ghostly gaping mouths; The Silence, which featured throughout Matt Smith’s first series, who frankly makes The Whisperers seem normal; and an Ice Warrior that broke out of its frosty cocoon in the Arena. That subterranean opening also disgorged slinky, reptilian Silurians, first seen on a spiral wrought-iron staircase that was important to the Christmas show where we met The Doctor’s latest companion, Clara; a Weeping Angel (don’t blink!); and, of course, a master Dalek … not forgetting the rhino-like Judoon, Cybermen, Vampire Girls (from Venice), with audience squeals as the monsters approached.

The audience was not to be outdone: amidst a plethora of Doctor Who T-shirts (including my vintage 1991 MOMI exhibition one – as far as I could see, unique in the Hall), there were plenty of Matt Smith lookalikes (one with sonic screwdriver outstretched to ward-off an approaching Cyberman, and quite a few – adorning older fan’s necks – Tom Baker-style long scarves (how they coped in the heat, I’m not sure). 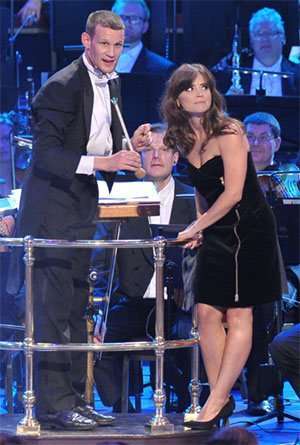 But there was one major difference to the previous two Doctor Who Proms – this contained only music that had appeared on-screen. Yes there were classical pieces – ‘Habanera’ from Bizet’s Carmen (from Asylum of the Daleks, this last series), J. S. Bach’s (if written by him!) Toccata (only the Toccata, no Fugue) from BWV565, in Stokowski’s orchestration (Colin Baker, in 1985, managed to transform the Tardis into an organ, on which the Bach was played – perhaps incongruously in Attack of the Cybermen), and Debussy’s ‘Girl With the Flaxen Hair’ (from Book I of the piano Préludes) originally re-imagined by Dudley Simpson – in the audience – and Brian Hodgson, for 1977’s The Robots of Death with the longest-serving Doctor, Tom Baker – 004) – but all but two pieces of the remainder of the programme were from Doctor Who’s house-composer Murray Gold.

Gold is a master of soaring, anthemic miniatures, which can fill universes with majestic timbres, and dark, brooding, scary soundscapes. There’s humour too, and it works incredibly well with the images seen across the Hall. For fans of the show these specially edited montages are thrilling (even if the visuals keep you staring at the screens rather than watching the BBC National Orchestra of Wales). To be honest, the final piece – Song for Fifty – receiving its world premiere – was a bit of a dirge, especially as it was meant to be a birthday-tribute to the series, and was not accompanied by images. There was a Handelesque reference at “marvelled at, wondered at”, but of the quality of a Purcellian ‘birthday ode’ this was not. Allan Clayton and Elin Manahan Thomas were the vocal soloists, along with the London Philharmonic Choir in Song For Fifty, with Thomas and the Choir adding eerie vocalise to many other pieces. 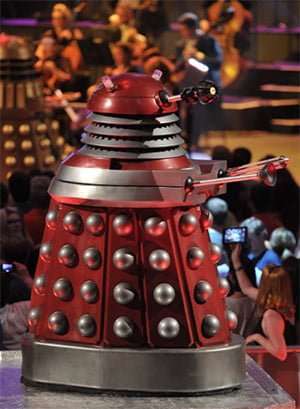 Clayton (in full costume as a disciple of Akhaten – from the second of the most recent Who series) was joined by young Kerry Ingram for the song to placate an angry sun, and Ingram was not the only youngster involved. Winners of the “Create a Soundtrack” competition heard their entries, as orchestrated by Ben Foster, given their first outings, accompanying climactic scenes from the 2012 Christmas special, The Snowmen. The senior winners (14-16) were Gabe Stone and Matthew Owen from Gloucestershire and the junior winners (11-14) were William Davenport and Jordan Picken from Stoke-on-Trent; they obviously have good ears for pacing and contrast.

Also specially scripted was a film insert of The Doctor and Clara outside on the street without tickets for the Prom. But – rather Willy Wonka-like – The Doctor has a special permit which, when the silver is scratched off transports you into any entertainment in the universe, where you take the place of someone already in the Hall, who then find themselves naked outside. And, lo-and-behold, they didn’t appear in the audience, but from within the orchestra: Matt Smith with cropped hair could easily have walked through the Hall without being recognised; conversely Ben Foster has now grown flowing locks and was seemingly mistaken for The Doctor by the Daleks (who croaked for him to stop overacting). Only once did Foster use The Doctor’s present – a sonic baton, which was highlighted in the full-colour, high concert programme, once again in Tardis shape, and this time with doors that open on the cover to view the inside of the travel machine. Unfortunately Smith would give away no secrets as to the biggest cliff-hanger in fifty years of Doctor Who – the final image from the last series: an older figure turning to the camera and the words: “Introducing John Hurt as Dr Who.”

How all this transferred to BBC Radio 3 listeners I can’t tell. The television broadcast is yet to be announced, but the concert was definitely conceived for TV, with amplification of the orchestra (!), which made the strings sound tinny: for the pieces accompanying spoken excerpts, such aid is perhaps unavoidable, but not for the whole concert. The rule should be simple: the Proms is for the audience (and radio listeners, obviously) – television production should strive to capture this without dictating changes that affect the live experience. Simples! BBC National Orchestra of Wales is completely at home with Gold and Foster. Although it always gets a credit at the end of every episode, it is completely fitting that BBCNOW gets a lion’s share of the limelight at the Royal Albert Hall. If any Doctor Who fan, seeing an orchestra for the first time, returns for another concert, then that will embody Sir Henry Wood’s pioneering spirit. Here his bust shared the stage with the Tardis.

The niggle of amplification aside, this was a good-feel evening. I have followed Doctor Who for fifty years (having watched the first-ever episode aged two-and-a-half) and this Prom was a magnificent celebration.