“The appearances of John Wilson and his orchestra have become one of the annual highlights of the Proms. Following the enormous success of the staged performance of My Fair Lady in 2012, John Wilson returns to perform Cole Porter’s Tony Award-winning musical Kiss Me, Kate in its original 1948 arrangements. He is joined by a cast of leading singers in this irreverent reworking of The Taming of the Shrew…” [BBC Proms website]

Kiss Me, Kate
Music & lyrics by Cole Porter to a book by Samuel & Bella Spewack based on Shakespeare’s play The Taming of the Shrew [semi-staged performance using the Critical Edition by David Charles Abell and Seann Alderking and the original orchestrations by Robert Russell Bennett and Don Walker] 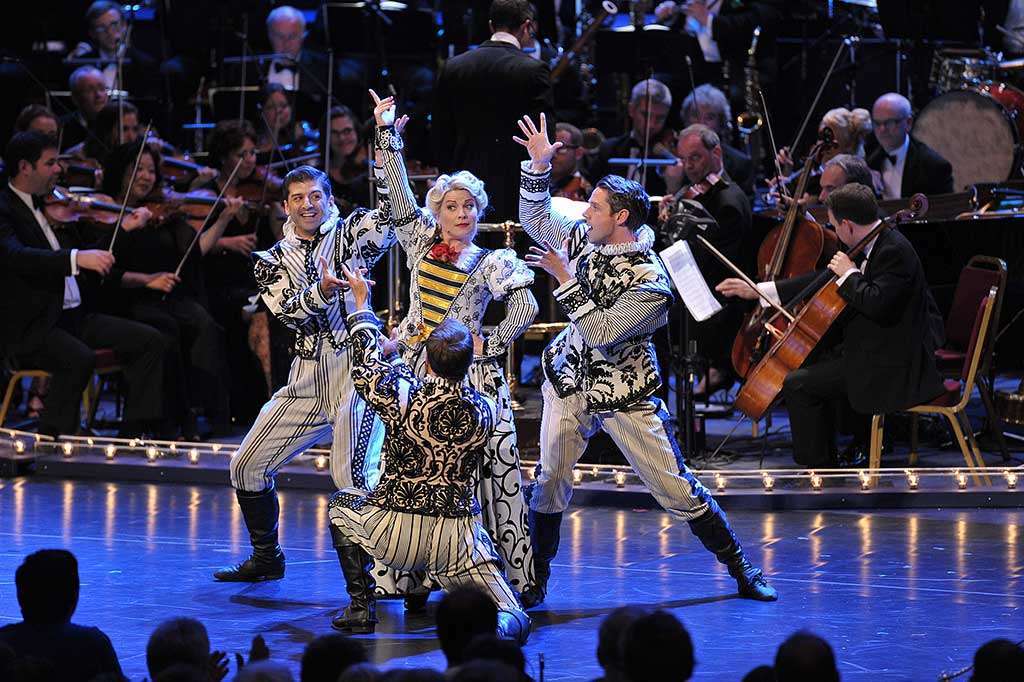 ‘Another op’nin’, another show’ – this time Cole Porter’s Kiss Me, Kate. John Wilson and his hand-picked Orchestra have delighted Proms-goers since 2009 with their celebration of classic M-G-M film titles. 2012 brought the team’s first complete re-creation of a musical (My Fair Lady) to the Proms. Now Wilson has been inspired to present another one: marking the 50th-anniversary of the death of Cole Porter, here was the original 1948 version of the show, newly critically edited.

As with most musicals, the orchestrations were not undertaken by the composer. Robert Russell Bennett did the bulk of the scoring with Don Walker taking on about one-third of the task. Opening on Broadway (New York City) on 30 December 1948 (with a cast including Alfred Drake, Patricia Morison, Lisa Kirk and Harold Lang), Kiss Me, Kate won Tony Awards in five categories in 1949 and further honours when it received its Broadway revival in 1999. However, despite it being Porter’s greatest success (it ran for 1,077 performances initially), it is not often produced, with only one Broadway and three London revivals since. A film adaptation was made in 1953 (by M-G-M, with Kathryn Grayson, Howard Keel and Ann Miller), but significant changes were made to satisfy the censors and though the film does not differ greatly from the stage version the latter holds together better. 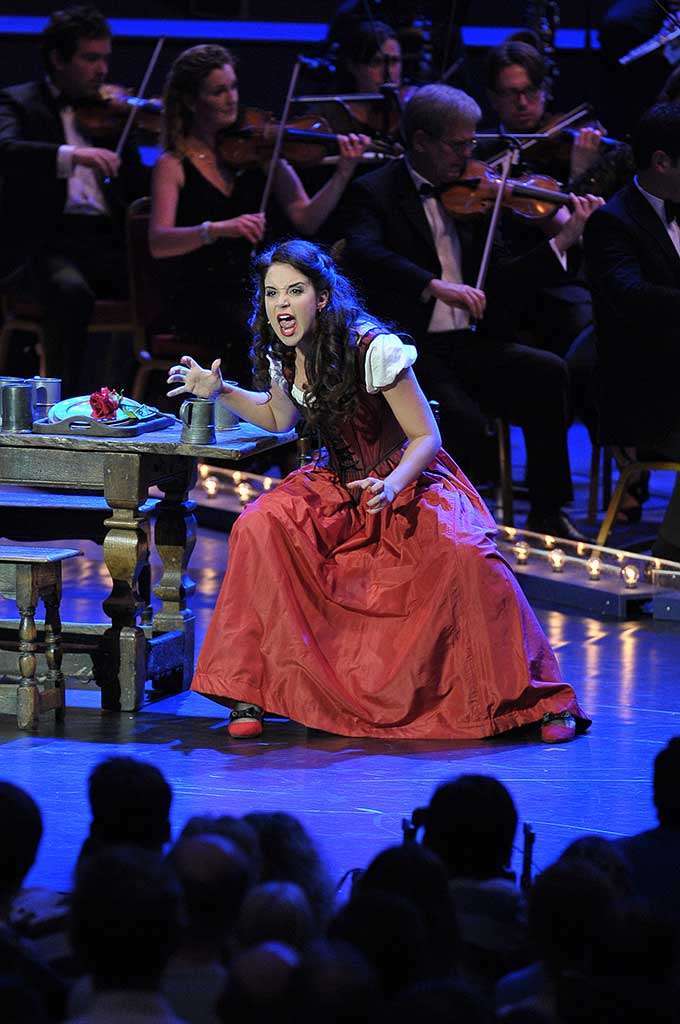 Full use was made of the Royal Albert Hall’s stage with a pit-sized orchestra pushed to the back. This allowed for the substantial dance-routines to be shown off to the full by the ten dancers of the 24-strong ‘Kiss Me, Kate’ Ensemble – a group of West End performers presenting a wealth of singing, acting and dancing talents.

In this departure from Shakespeare’s The Taming of the Shrew – a play within a play, telling of first-night backstage tensions – each of the Proms cast was brilliant, whether in Lilli’s passionately beautiful, almost operatic ‘So in Love’ or Lois’s similar protestations of love to Bill, promising she would be “always true to you, darlin’, in my fashion.” From Lilli’s comic characterisation, in her declaring venomously how ‘I hate men’, to the slapstick of the gangsters (Slug and Lippy in the film) as they espouse their appreciation of the Bard while trying to extract the $10,000 owed to their boss from an unwitting Fred, every singer, actor, dancer and musician played their part in a great success.

A frequent problem for singers using microphones at the Royal Albert Hall is that the loudspeakers are about ten metres above them; so, for the listener, the sound of the voices is separated from the performers. Nothing can easily be done to remedy this (musical theatre has been amplified for many years) though there were other gremlins that crept into the technology including a crackle in Lilli’s microphone that was fixed for the second half. Allowing for these perhaps-inevitable problems, the general balance between singers and orchestra was good: even so there were cases where a singer was too loud, the first-Act ‘Wunderbar’ for instance.

As has become our expectation, John Wilson, his Orchestra and the chosen soloists (there is no chorus in Kiss Me, Kate) did not disappoint in what was possibly the best production of this musical in decades. The dialogue moved quickly leaving no hint that this was a ‘first night’ – but it was also a one-off … but that is the John Wilson way; however, this Prom was recorded for BBC Two-broadcast this December. Brush up your Shakespeare!