“Who needs instruments when you have seven voices and seven bodies? The inimitable a cappella group Naturally 7 comes to the Proms fresh from performances at the O2 supporting Michael Bublé. Building on the heritage of gospel with a style described as ‘vocal play’, the group performs its own original material as well as its inventive arrangements – including George Harrison’s ‘While My Guitar Gently Weeps’ and Phil Collins’s ‘In the Air Tonight’ – which incorporate scratching, drum kit, harmonica, brass, electric guitars and bass – all produced, naturally, with the human voice.” [BBC Proms website] 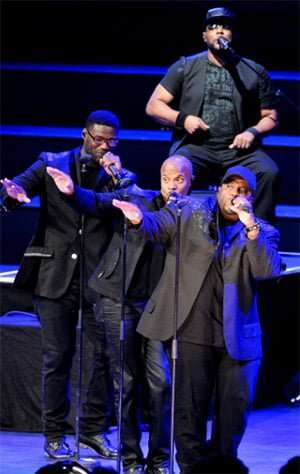 After a week of non-scheduled Late Night Proms (Wagner providing enough on his own), the season’s third week opened with a return to nocturnal form. It culminated three ‘late’ vocal presentations, which successively reduced in size, from massed Gospel choirs, to the 40-strong Ex Cathedra in Stockhausen’s ‘Welt-Parlament’ to just seven, or – should I say – Naturally 7. Every sound we heard is produced solely by the human voice; so the stage was more or less bare. From opposite sides, down the Royal Albert Hall’s Stalls stairs arrived the seven New Yorkers who, since 1999, have indulged in what they call “Vocal Play”. Put simply they have taken instrument-mimicking beatboxing to the nth degree, and even accompany their vocals, fashioning wind, brass, synthesisers, percussion and, most extraordinarily, guitars with mouth and microphone alone. After the recent hit ‘Keep the Customer Satisfied’ (not to do with the Simon and Garfunkel song), the mood for interaction was set early on, audience members encouraged to wave their arms to The Isley Brothers’ cover ‘Summer Breeze’ – and later to augment to the YouTube sensation (filmed on the streets of Paris), Phil Collins’s ‘(I can feel it) In the air tonight’.

One of the problems with Naturally 7 is that, as recorded, it sounds as if real instruments are being played, so the group is best experienced live. This was not only 7’s Proms debut but their first Royal Albert Hall appearance. I was completely won over within seconds. And the artists proved, late on, my point about not needing amplification in this Hall (the Gospel Prom) by singing truly a cappella, without their microphones, in a delicate and intricate medley of three Simon and Garfunkel songs, where harmonic richness replaced instrumental mimicry to clothe the lyrics of ‘Hello Darkness My old Friend’, ‘Scarborough Fair’ and ‘April Come She Will’ in an appealing ethereal glow. 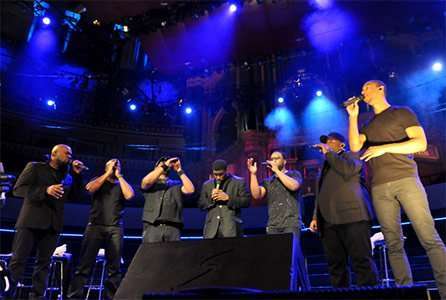 But – just to prove amplification can work (as it also had done in the Stockhausen) – Naturally 7’s microphone technique and sound-engineering were pitch-perfect, whether in the brasher numbers – covering Cream’s ‘Sunshine of your Life’ or the Herbie Hancock instrumental medley – or, most impressively in the more restrained numbers. Three of the 7 members are British-born (brothers Roger and Warren from Manchester, Garfield Buckley from London), hence a hint of ‘Rule Britannia’ that led into an elaborate version of Sting’s ‘Englishman in New York’. Later Coldplay’s ‘Fix You’ outdid Naturally 7’s US touring partners last year in vocal sweetness. More up-tempo, the encore was a The Beatles’ White Album ‘While my guitar gently weeps’. Just a snatch of Bob Marley’s ‘One Love’ and the waving of a Jamaican flag, referenced the island parentage of four of the band’s members.

While the 7 have been developing their skills for 14 years, they gave us a quick tour of their influenced – “Hip Hop, Gospel, R & B, Jazz: everything we do” – in ‘Jericho (Joshua fit the Battle of Jericho)’ before later returning to the ramparts Joshua pulled down to rebuild them in ‘Wall of Sound’, complete with a masterclass in how to echo and fade. Polo Cummings – having already astounded us by being a trumpet – brought his guitar to the fore, and was then joined by Warren Thomas for a duet in the encore. Rod Eldridge dispensed with his band-mates to demonstrate how all you need is a loop pedal, building up an improvisation topped by a repeated vocal call: “London”.

And there was an important visual element too: when ‘Hops’ Hutton became a bass guitar, his hands were placed horizontal across his body, as if playing the instrument; when he was a double bass, the hands were placed vertically. Warren Thomas, sat for the most part at the back, was playing the percussion he was vocalising. Dwight Stewart extended one hand as if playing the trombone he was creating the sound for. And he was the composer and vocalist for the soaring ‘Run Away’, showing it’s not just mimicry and cover versions in Naturally 7’s armoury.