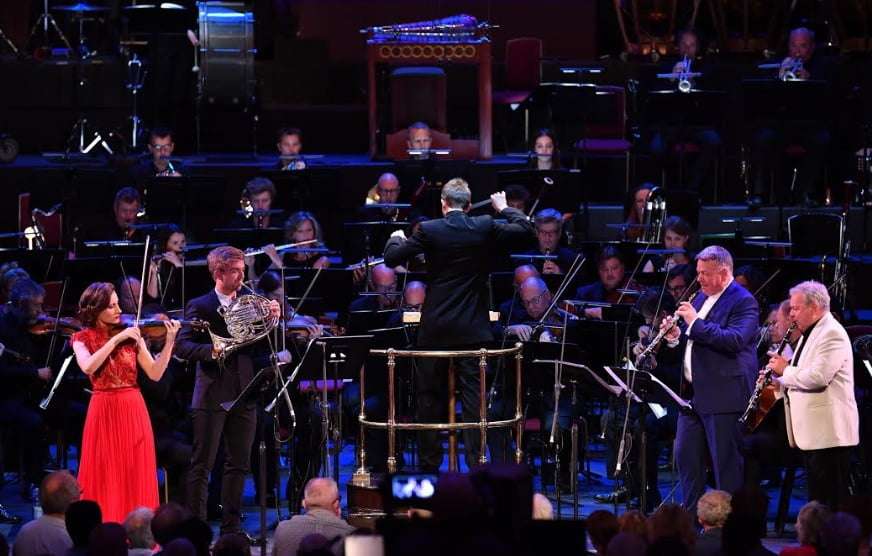 How do you celebrate an institution’s fortieth-birthday, which has elicited not only twenty-one winners but also a hinterland of talented others? That’s the problem faced by the Proms to mark the BBC’s second-most recognised classical music event: the BBC Young Musician competition. It didn’t seem to be a problem, as this hugely enjoyable jamboree proved over nearly three hours. The only thing missing (unusually in this season) was a female composer amongst the commissions and arrangements.

Unashamedly collegial, the audience was presented with four concertante-style works for multi-instruments: two-and-a-half world premieres (the half being Giovanni Sollima’s new transcription of his two-cello work for four, Violoncelles, vibrez!) and an arrangement of Saint-Saëns’s Carnival of the Animals. But first – and, indeed, last – there was a celebration of the legions of competitors who have featured, with seven of the category finalists from the latest BBC Young Musician, who joined the BBC Concert Orchestra for the opening and closing pieces, beginning with Ben Foster’s BBC Young Musician Theme and Variations. The close was Henry Wood’s scoring of ‘Great Gate of Kiev’ (Mussorgsky’s Pictures) with four percussionists – Toril Azzalini-Machercier, Meadow Brooks, Tom Hall and Alexander Pullen – swapping their tuned percussion in the motor-rhythms of Foster’s piece for giant bells in the Gallery in Wood’s rather overblown transcription (including organ). Amidst the orchestra were bassoonist Francis Bushell, horn-player Annemarie Federi and, on bass trombone, Michaias Berlouis. 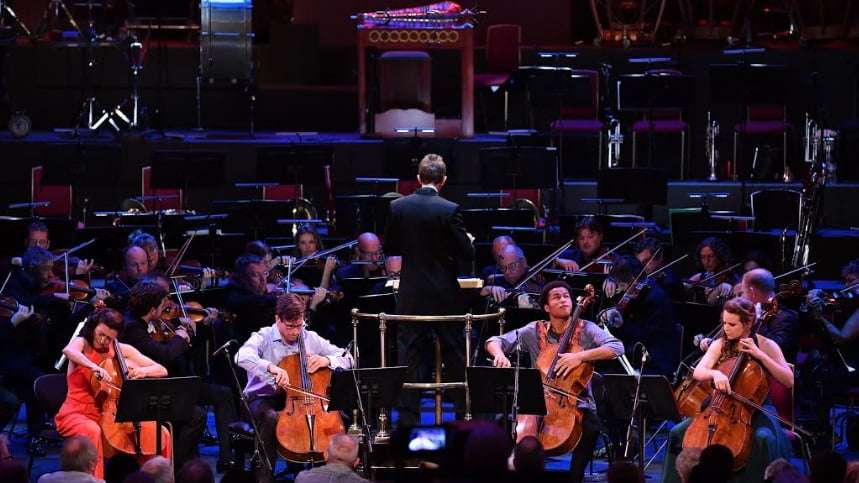 Of the first commission, Nicholas Daniel and Michael Collins seemed to get the larger share, or at least the most lyrical lines, of David Bruce’s Sidechaining, leaving Jennifer Pike and Ben Goldscheider with a sometimes uneasy balancing act on the other side of Andrew Gourlay. But the piece – taking its title from a digital editing term, playing with the effect of one channel on another – is intriguingly constructed and with melodic lines, immediately.

Although there has only been one percussion winner, Adrian Spillett (1998), the way had been paved by Colin Currie, who ensured that the innovation in 1994 – the introduction of a percussion category – would be a permanent fixture. Here, Currie and Spillett and the other percussionists listed, reprised one of their party pieces: the first part of Steve Reich’s Drumming: fifteen minutes of ever-changing rhythm. In the loudest passages the Royal Albert Hall’s echo added surreally to the tattooed barrage.

More mellow was the sonorous combination of the four cello winners. With the BBC Concert Orchestra they played Violoncelles, vibrez! (Cellos, vibrate!), which shares out and builds on the duet of the original in a harmonic balm. Finally in the first half, a nod to the most recent addition to the BBC Young Musician portfolio – Young Jazz Musician, first held in 2014 and – this November – back for the third time. Alexander Bone and Alexandra Ridout were joined by Emma Johnson, David Childs and Jess Gillam, in the first of two pieces arranged by Iain Farrington. Gershwinicity takes five songs by George, each featuring a solo instrument. 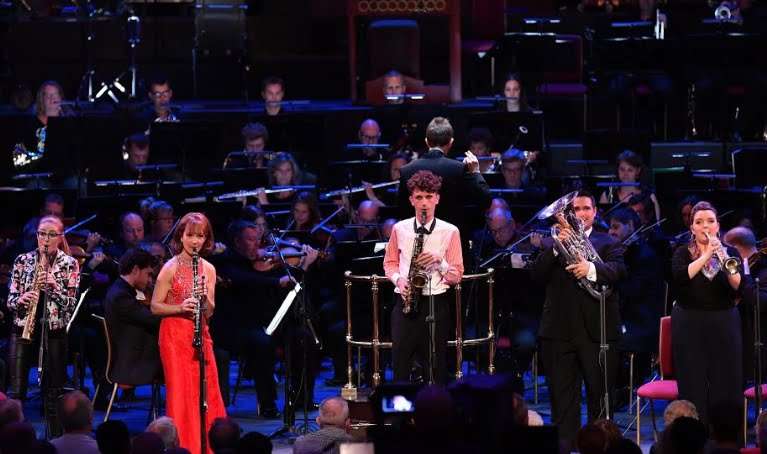 There have been five piano winners of Young Musician (among notable finalists – Stephen Hough, Ronan O’Hora, Lucy Parham, Leon McCawley, Tom Poster and Benjamin Grosvenor), four of whom came together for Farrington’s reimagining of some of Saint-Saëns’s Carnival of the Animals. Originally scored for piano duet with small ensemble, here each piano had two players. Extraordinarily this marked Freddy Kempf’s debut at the Proms, although he looks no older than the others. After massed tremolos to start, leading into ‘Royal March of the Lion’, our pianists swapped between themselves, Farrington souping-up his transition passages enjoyably, while leaving ‘Aquarium’ and ‘The Swan’ in their original instrumentation, the cello solo in the latter taken by BBCCO’s principal, Benjamin Hughes. Funniest of all was the joint battle of ‘Pianists’, each pianist bashing out those scales and getting it wrong and having to let their partner have a go, while the others turn too many pages in the score, or even turn the score upside down. The fun was captivating and the glass harmonica just below Henry Wood’s bust proved an unsung hero in the mix.

There was only one winner left to meet, Nicola Benedetti and her spirited rendition of Ravel’s Tzigane. There had been a curious hiatus prior to this in that the stage-change was not covered by Clemency Burton-Hill’s cloying narration; she had been upping the ante with her hyperbole: everything was “amazing”, “wonderful”, “fantastic”… The occasion could speak for itself and, from her, less would have been considerably more.

The BBC Concert Orchestra got its own piece to shine, Sir James MacMillan’s Britannia was written as a British Telecom Celebration Series commission and programmed across the nation in 1994-5. With its collision of various national themes, stitched together with quotes from Elgar and Arne, it’s a likeable occasional piece which ends quietly and uncertainly as perhaps anything encompassing the modern view of historical imperialism should. It was Henry Wood that provided the bombast in his bell-laden version of ‘Great Gate of Kiev’. The BBCCO and Andrew Gourlay did the Young Musicians proud, and deserve as much praise as the individual contributors to a very enjoyable birthday party.