“Since the Ten Pieces film launched last October, children in schools across the UK have been working on their own creative responses to music by Beethoven, Britten, Mozart, Mussorgsky and others, with the help of BBC ensembles. Some of the results now come to the Royal Albert Hall, where they will be performed alongside extracts from the Ten Pieces that inspired them. These two Proms are a musical celebration showcasing digital art, dance and new composition, bringing the first year of the BBC’s Ten Pieces project to a triumphant close. Barney Harwood and Dick and Dom join in the fun.” [BBC Proms website]

Members of the BBC Singers

Trinity Laban Conservatoire of Music and Dance – Connect It Ensemble 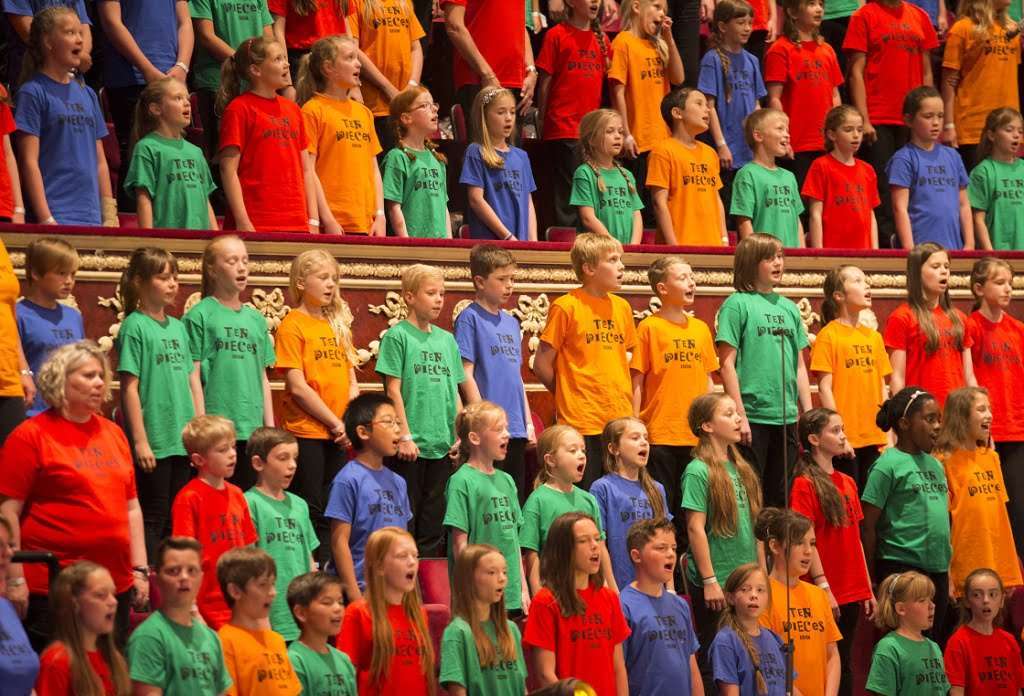 There was a well-filled, enthusiastic house for this second (morning) performance of the Ten Pieces Prom with primary-school children producing their creative responses to music, including through dance, digital art and compositions introduced by regular CBBC presenter Barney Harwood with interruptions from Dick and Dom, Molly Rainford and Dan Starkey.

Given the pressures on music-teaching in schools Ten Pieces is an important initiative from the BBC. This was a well-prepared and thought-out concert that kept the young audience involved for its two-hour length. The pace never slackened and as much attention was given to the visual as well as to the musical.

The full resources of the Royal Albert Hall were used. Screens showed how children responded, lighting was used to create mood and atmosphere, spots picked out individuals in the audience, a troll (Grieg’s ‘In the Hall of the Mountain King’ from Peer Gynt was included) appeared throughout, there were witches for Mussorgsky’s A Night on the Bare Mountain and there was considerable interplay between the presenters, the orchestra and the audience (Dick and Dom tried their hands at conducting). 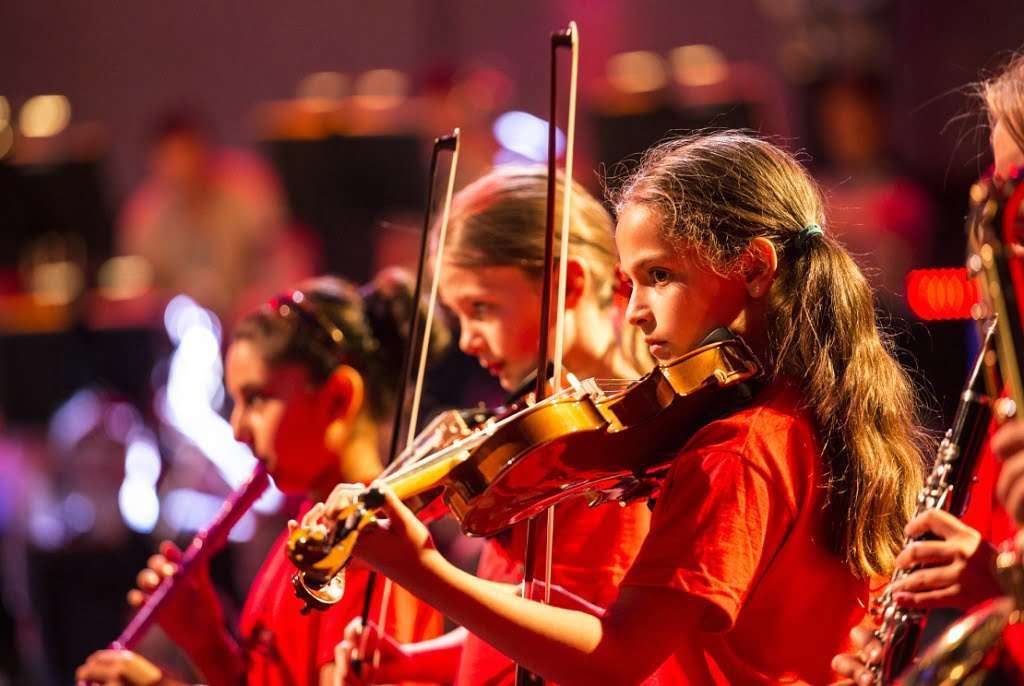 Normal standards of concert-going decorum were suspended to allow the audience to revel in the participatory experience. Adults were encouraged to get in touch with their inner child. There was much panto-like involvement, children squealed, babies cried, enthusiastic parents snapped their children on cell-phones, and popcorn sellers were under siege during the interval.

The performers, led by the likeable Harwood, all worked hard, albeit some of the orchestral players may have been outside of their comfort zone – when fleeing a troll. Thomas Søndergård, if he ever gives up the baton, surely has another career in children’s television.

Musical values weren’t neglected. It was inevitable that the Ten Pieces would all have common factors of colour, punchy rhythms and nifty changes of pace rather than the broad span of symphonic music. John Adams’s exuberant Short Ride on a Fast Machine is a perfect piece for this sort of project. The Prom opened with a menacing ‘Mars’ from Holst’s The Planets with fine brass-playing. The first movement of Beethoven’s Fifth Symphony was another success with its broad melodic spans developed out of brusquely unmelodic motifs catching the attention of the youngsters. The ‘Storm Interlude’ from Britten’s Peter Grimes was danced by boys from St Joseph’s College with physicality. The Grieg rather lost focus with too many repeats to accommodate the troll. Tim Thorpe was a suave and buoyant soloist in the finale of Mozart’s Horn Concerto No.4. 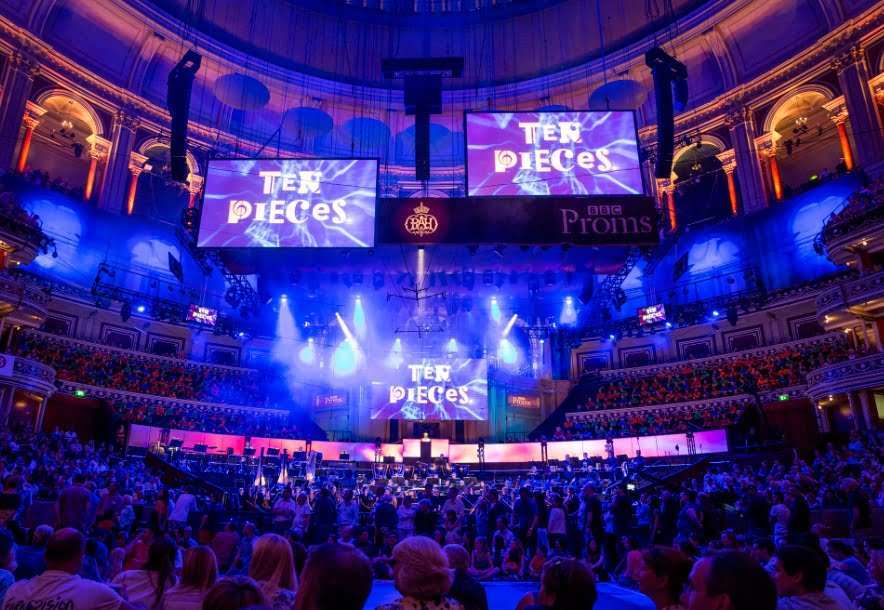 There was also an attractive short piece for strings called Equinox by Eivhlinn Lisa Fee of St Mary’s Primary School in County Fermanagh. The first half of the concert closed with Handel’s Zadok the Priest (now known for being the theme for Champions’ League television coverage as much as a Coronation Anthem) performed by the Ten Pieces Children’s Choir in multi-coloured T-shirts.

Anna Meredith’s piece for body-percussion, Connect It, was a crowd-pleaser. The Trinity Laban Ensemble performed with snake-waves, yo-yos and handclaps, and hissing and beat-box sounds. Then Meredith and choreographer David Ogle got the audience on its feet to replicate the moves.

When a magnificent illuminated Firebird puppet, supported by four puppeteers, soared above the Arena, an uninhibited orchestra playing at full stretch (a snip from Stravinsky’s ballet score), it seemed an appropriate end to the concert and a moving memorial to the late Katy Jones (1963- 2015), a BBC producer who had been a driving force in for Ten Pieces. One was left with renewed respect for those who work in children’s education and a sense that those children present had been given a real introduction to the visceral thrill of live classical music.

This Prom will be given a broadcast on BBC Radio 2 and a showing on CBBC.