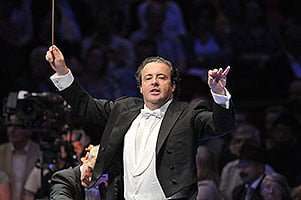 The BBC Philharmonic and its newish Chief Conductor Juanjo Mena consolidated their considerable form in the penultimate of the orchestra’s four Proms. There is no doubt that the Philharmonic is doing very well by Mena, notably in the finesse of his approach to mainstream North-European repertoire. Mena certainly took to heart Wagner’s direction of “nicht eilen” (do not hurry) in the Tristan ‘Prelude’ with his spacious tempo, and the orchestra was with him all the way in the time-stopping concentration of its playing, delivering that familiar, addictive flickering between sensuality and nirvanic abandonment with effortless ease. The various instrumental entries, all beautifully played, crept in with immense subtlety, the soft rhythmic pulse puffing air into the notes, and Mena applying a suggestion of pressure and carnality to the swooning climaxes. It was a wonderfully interior, meditative performance – just imagine the whole opera done to this degree of intensity – rounded off by Wagner’s concert ending, with its effective use of harp (which otherwise doesn‘t figure in the Prelude).

There wasn’t much in the way of meditation to James MacMillan’s new Credo. MacMillan, whose music is inextricably linked to his Roman Catholic faith, calls it a concert setting, but it still has a powerful, Messiaen-like sense of ritual. It doesn’t, though, have those elements of political drama and private doubt that drive more engrossing works such as his Parthenogenesis, Clemency, and St John Passion. Its three sections – ‘Pater’ (Father), ‘Filius’ (Son) and ‘Spiritus sanctus’ (Holy Spirit) – confront the listener with the extraordinary requirements of faith in music of unambiguous directness. ‘Pater’ terraces the choir against orchestra (strings, woodwind, two horns and trumpets and timpani) in blocks of simple antiphony, much in the style of Russian Orthodox music and Stravinsky at his most austere. In ‘Filius’, the choir’s music becomes much looser and more melismatic, and the moment when the text folds mankind into the divine equation is written with immense force – indeed, the music for the ‘Et incarnatus’ through to the ‘Ascension’ is the most satisfying in the whole work, with a bloom and sense of ecstasy that lights up the words. The use of three violas as an aural halo has a direct line to Tippett at his most visionary. The orchestral outburst for the closing statement – “I believe in one, holy, catholic and apostolic church” – has a ruggedness and defiance that is more embattled than confidently glorious. It was this passage rather than the choral-society conventional, rather orotund “Amen” that defines Credo. MacMillan’s brilliant brass fanfares, a tinnitus-like buzzing in the strings and his trademark glissandos were just some of the effects in this angular, colourful score, brought to life by the choir’s incisive, drama-filled singing.

I was disappointed by the indifferently played, broad-brush Bruckner 8 at the Proms four days ago (BBCSSO/Runnicles), and approached this No.6 with a degree of anxiety. Mena and the BBC Phil, though, were in another league, almost on another planet, in a performance that worked on so many levels. For a start, Bruckner is still castigated – despite plenty of evidence to the contrary – for his organ-registration orchestration, which does the job well enough with a limited palette. Mena worked miracles, with a range of colour, detail and delicacy that had the ear begging for more – witty repartee in the woodwind, sinuous trumpet calls in the coda to the first movement (followed by more pointless clapping dribble that came between all four movements), the broad string sound at the start of the Adagio that slimmed down to opacity to support an achingly lost oboe solo, and the bubbling luminosity of the scherzo’s trio. Then there was Mena’s clarity in the rhythmic complexity of the first movement, brimming with a compelling, pliant mobility that added a light-saturated grace to the music’s stature. As if that and a transcendently lovely slow movement that pulled heart-strings every which way weren’t enough, Mena’s grasp on the finale was complete, indeed, the finest I’ve heard in a concert. Not only did he let the music dance, he also drew the different strands together in an organic process of accumulation and retreat that eventually was released into a glorious conclusion. It’s a movement that causes many a conductor to stumble. Mena didn’t miss a trick and the result for the whole symphony was a revelation, and you don’t get many of those. This was a thrilling, delightful performance.