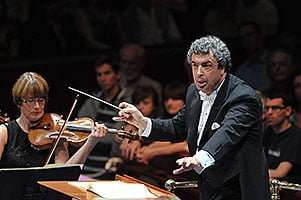 This Prom turned out to be a significant concert for Semyon Bychkov, whose close relationship with the BBC Symphony Orchestra was celebrated with a unique honour, the conferring on Bychkov of the Günter Wand Conducting Chair and also recalling the name of another much-lauded past collaborator. On future occasions, though, Bychkov might wish for the BBCSO to be in better shape than it was for this concert.

Of course, the orchestra’s workload is immense for the Proms. The weight of the schedule seemed to tell in Richard Strauss’s idolised musical self-portrait. Bychkov’s vision was a strong one: his swift tempo at the outset and tight navigation through the whole suggested a desire to emphasise the symphonic element of the score over the vividly descriptive. The orchestra playing in the work’s opening salvo (‘The Hero’) was tonally rich but messy, with the orchestra’s constituent sections seeming ill-coordinated. The calm and contemplative sections reflected more of the orchestra’s strengths, one undoubtedly being guest-leader Sergey Levitin. His commanding playing in ‘The Hero’s Companion’ spoke of the steady but forceful influence of Strauss’s wife, Pauline. It all swelled to a tranquil and contended conclusion, carried by the warmth of the orchestra, now on surer ground, but the rough edges had detracted from Ein Heldenleben’s super-confident power.

Conductor and orchestra had been more of a mind at the concert’s beginning, giving an elegant and sombre reading of Schubert’s ‘Unfinished’ Symphony. Bychkov had the quietest of introductions from the low strings, but a restless audience – slow to settle – meant that the players’ delicate work had to wait until the exposition’s repeat to really be appreciated. This ‘Unfinished’ wasn’t a weather-beaten edifice; rather it was moulded and steadily unfurled. There might have been a little more tenderness to be found in the Andante, but Bychkov didn’t deserve to have the concluding silence he so obviously wanted so unthinkingly ruined by over-eager applause. The same insensitivity also blighted Heldenleben’s quiet, long-held close. 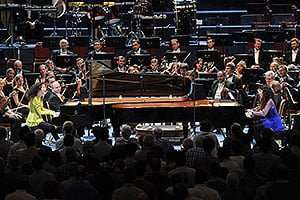 Katia and Marielle Labèque brought a piece written for them by Swiss composer Richard Dubugnon. His Battlefield Concerto was first performed in 2011, at Los Angeles’s Walt Disney Concert Hall, and follows the formalised plan of a 15th-century confrontation. Dubugnon presents preludes to the battle, the battle itself, a truce, funeral march, peace and feast – all in a single continuous span that pits one half of the orchestra against the other. Such opposition wasn’t immediately clear on a first hearing, but more apparent are the music’s influences, worn on the sleeve to an extent that suggested a hodgepodge of styles and voices. Prokofiev, Messiaen, Frank Martin, even the Warsaw Concerto all seemed to be in there, joined up with a rhetorical logic that wouldn’t have been out of place in the 1930s. Dubognon has a good ear for lucid and sometimes glowing orchestration, and for imaginative exchanges between the pianos and the orchestra, but it all sounded so anachronistic. The Labèques loved it, though, and followed it with a boogie-woogie mash-up of snatches of West Side Story.