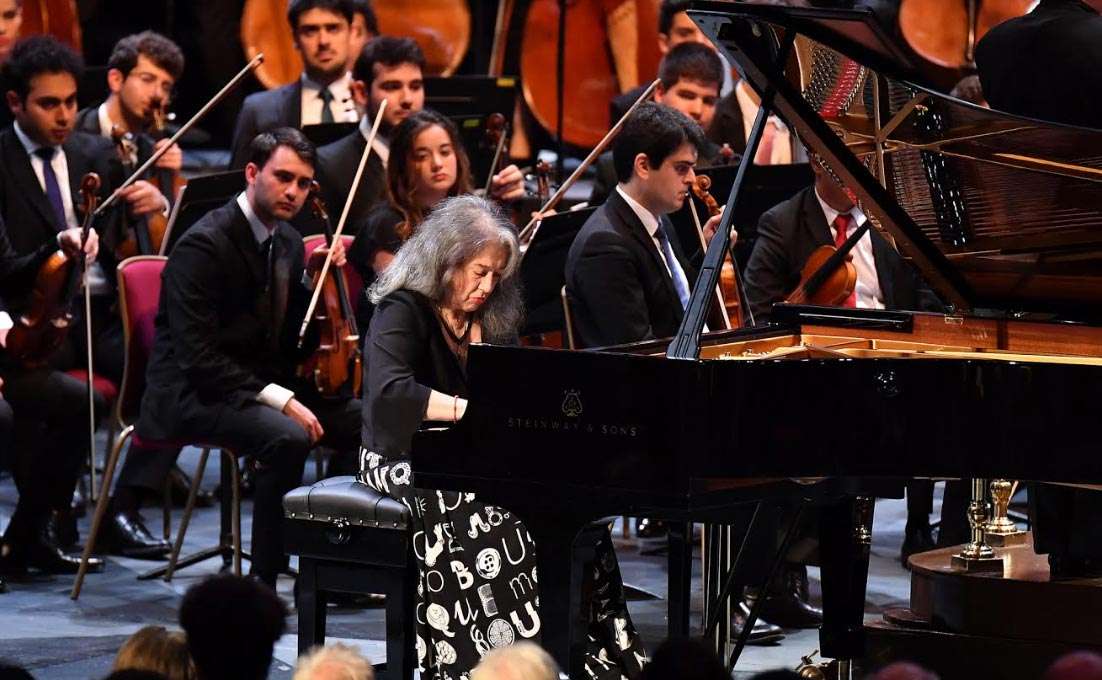 A full house for this London leg of the West-Eastern Divan Orchestra’s twentieth-anniversary tour was guaranteed even without the presence of Martha Argerich – the applause at the very start was deafening. No doubt bringing together musicians from both sides of the Israeli-Palestinian divide is remarkable enough but what about the music-making?

Daniel Barenboim can conduct Schubert in a curiously sedate fashion, as if transported to some sleepy German provincial town in the late 1950s. In 2017 we had a radical ‘Unfinished’ from Thomas Dausgaard in his first Proms appearance as chief conductor of the BBC Scottish Symphony Orchestra. Here Barenboim seemed prepared to meet the modern world halfway. With his string group slightly reduced (six double basses) and his violins placed antiphonally, the playing was nothing if not finely honed. The first movement, minus its exposition repeat, sounded relatively conventional, carefully dovetailed, not quite puddingy. Whereas the second flowed by at an unexpected lick, its histrionic outbursts subsumed into an easeful intermezzo. The mood was lyrical, not at all heart-on-sleeve or grief-stricken.

There was more drama (and eight basses) in the Tchaikovsky. Most pianists in late career opt for intimate recitals. Not so Argerich who has always preferred to make music with chums – and she has known Barenboim longer than most (both were born in Buenos Aires) even if they have only been regular partners in the last few years. In 2016, in the company of the WEDO, they dazzled us in Liszt. Here, yet more remarkably, was the Tchaikovsky which Argerich cancelled the last time she was due to play it in London. The fact that the same forces had given the work in Argentina and will take it on to Salzburg boosted the chance that we might hear it. 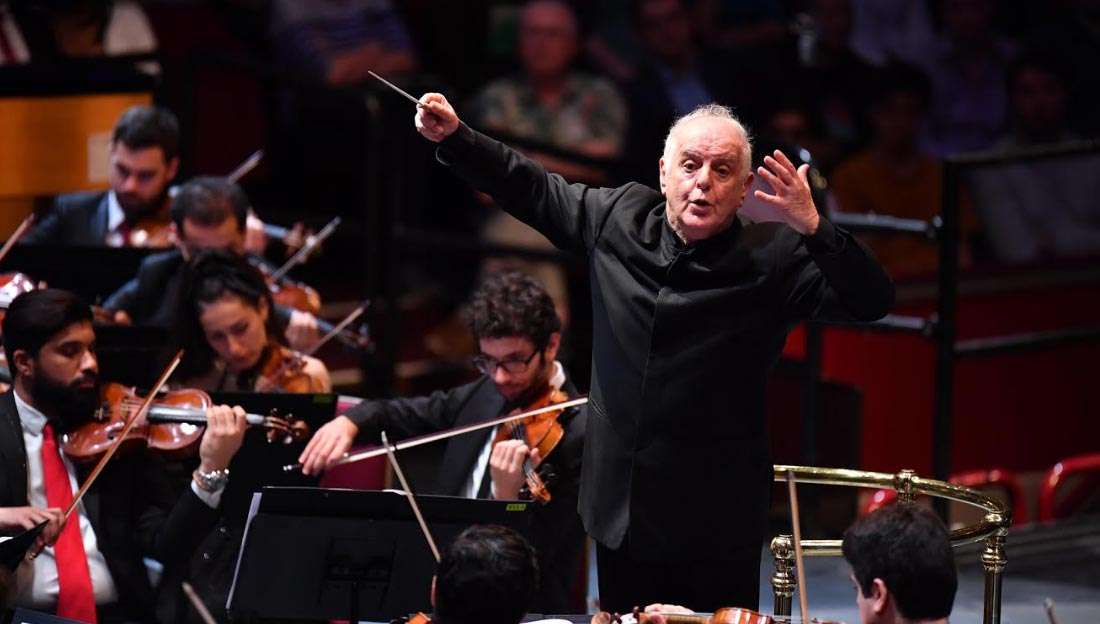 Though a good deal splashier in execution than it once was, her interpretation remains a thing of wonder, not consistently, blisteringly fast as it was under Kondrashin, nor as grand as it seemed with Dutoit, instead displaying the utmost freedom and fantasy. The pattern was for Barenboim to set a relatively sedate frame, with the pianist taking off in almost any direction, whether extending transitions to heavenly length or zipping through material at an unexpected canter, the Finale’s second theme being an extreme example. For some reason I was reminded of the way Ilie Năstase played tennis, alternating brilliant shots with a kind of playful indifference. Argerich was at her best in the slow movement, though she discovered intimate, chamber-like stretches elsewhere. Many of the purpler, more driven passages went well too, without a hint of septuagenarian compromise. Others were tactfully camouflaged with sustaining pedal. There was some re-composition too! And no encore. Perhaps she felt the performance hadn’t been tidy enough.

Barenboim ensured that the band never played too loudly and stayed with her throughout. Woodwind solos were again distinguished, with the violins encouraged to deliver some pockets of olde-worlde portamento. As in previous years the players were not named in the booklet and we wondered whether the redundant chap seated behind the upright piano on the far-right might have been present for security purposes.

Following the interval, during which a sizeable proportion of the audience went home, the Lutosławski was brilliant enough to dispel any sense of anti-climax. I was expecting the players to be brought further forward on the platform but a good number of members remained clustered on the steps behind, including a couple of stray cellists, leaving unoccupied space at the front. Was this for acoustic reasons? 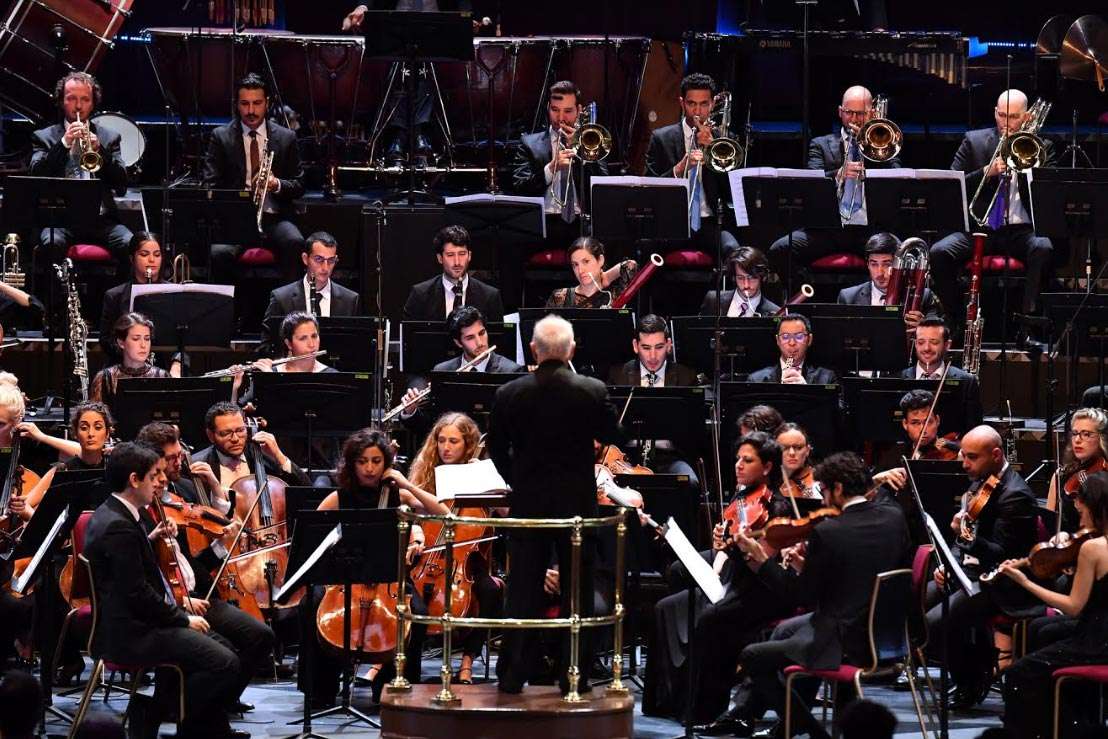 Barenboim conducted with the score but knows the music well, having recorded it in Chicago in the mid-1990s. The rounded sound of the WEDO did not preclude attack even if, in what seemed like a reversal of Argerich’s priorities, continuity was prized over the spotlighting of individual incidents. Hence the opening (marked to be played ‘aggressively’) was a little tame, its minatory drum knowingly undersold. The aforementioned pianist was revealed to be just that.

Barenboim capped it all with his most succinct Proms speech: “Why do I think you want an encore?” What followed was Beethoven’s Egmont Overture, music all ‘about’ national self-determination. The implicit message was delivered with an urgency and commitment to surpass all that preceded it, cellos and basses digging in to take their figurative stand against oppression. Sadly the general pause at its height, marking the moment of Egmont’s death, revealed at least two mobile phones in full spate. There was also some desultory clapping between movements, though not in the Concerto for Orchestra. Perhaps the keener applauders had left. None of which could spoil a memorable night.