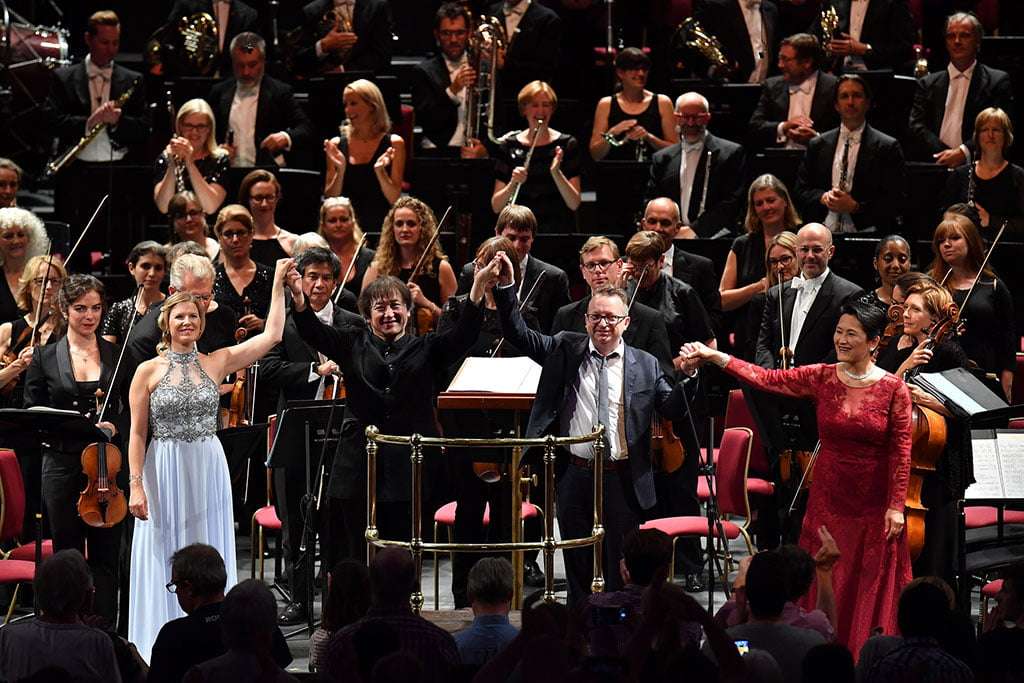 At around fifty minutes, Mark-Anthony Turnage’s Hibiki stands as one of the most substantial (along with the purely orchestral Speranza of 2012) of his concert works in the past two decades. Tokyo’s Suntory Hall was bold to commission such an extended work from a European composer to celebrate its thirtieth anniversary in 2016. In response Turnage produced a commemorative “secular requiem” addressing the earthquake and tsunami of 11 March 2011 which in turn triggered the meltdown of several nuclear reactors at the Daiichi power plant in the prefecture of Fukushima. By all accounts Hibiki made a deep impression at its premiere last November (the score itself dates from 2014) also with Kazushi Ono conducting.

Hibiki is scored for a sizeable orchestra and variously translates as “echo”, “sound” or “resonance” (it is also a male and female first name). There are seven movements of which the first, second and fifth are for orchestra. The third, fourth and sixth movements set largely Japanese texts, mainly in translation, of varying degrees of familiarity (to a Japanese audience), while the text for the final one is simply the word “Fukushima”.

The titles of the first two movements, ‘Iwate’ and ‘Miyagi’, are names of other prefectures hit by the tsunami. ‘Iwate’ begins ear-ticklingly enough with repeated phrases on muted brass, but as these spread and accumulate a dense, unsettling texture is created which certainly does not make for the easiest entry point into the work. The texture coalesces only at its cut-off point. That this is an intentionally ‘difficult’ soundworld is confirmed in the second movement, which opens with an extended passage consisting of slow, eerie instrumental lines. The spare, drained polyphony and constricted harmonic bandwidth of this music seems to me a new development for Turnage. The unexpected hammer-blows that invade and eventually take over the movement are more-familiar territory for this composer and a graphic depiction of the subject matter. 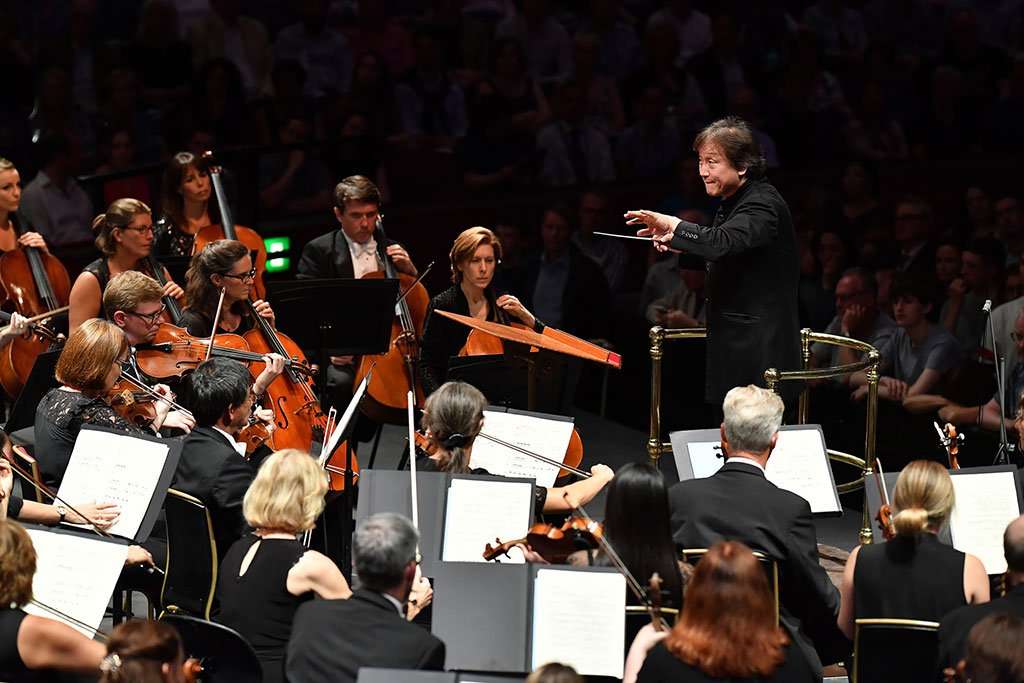 Both vocal soloists dominate the urgent third movement ‘Hashitte iru’ (Running), variously in rhythmic unison or closely imitative lines – the music very much in the service of Sō Sakon’s text depicting her escape as a child from a wartime bombing raid, Turnage the opera composer to the fore here. The startling peroration seemed to come out of nowhere. After that, ‘Kira kira hikaru’ introduces the children’s choir, the singers’ clean, straight unison lines poignant after the disjunction of the preceding movements – and a Britten-ish tune to take home. The text is a Japanese translation of nothing other than “Twinkle, twinkle, little star” conjoined with a development of the nursery rhyme by Jane Taylor. The soprano takes over for the final verse, extending an adult hand to the children.

The fifth movement ‘Suntory Dance’ brings Hibiki’s clearest sighting of Turnage in full ‘Turnage mode’; the fusion of Stravinskian phraseology with jazz articulation, the neon-drenched urban nightscape, but here inflected with something new again – a leaner, borderline-austere, syntax flecked with light percussion. ‘On the Water’s Surface’ sets a text from Japanese puppet theatre by Chikamatsu Monzaemon, a moving farewell to life on Earth sung by the mezzo. Mihoko Fujimura’s rendering of this ‘aria’ – the heart of the work – was unforgettable in its resigned purity; an elegiac element is foremost here, crystallised in a keening clarinet solo heard repeatedly.

The final section, ‘Fukushima’, combining all the forces for the first time (in the manner of War Requiem but without the emotional release), conjures up a haunting soundworld with the simplest of devices, an oscillating minor-third in the chorus. Perhaps there was finally something of Toru Takemitsu’s influence in the sporadically rippling woodwind, exotic percussion and quietly luminous harmony. The movement, and the work, ends with a perfectly-judged bell sonority.

Hibiki is in every way another milestone in Turnage’s protean output, a crowning success coming after many other appearances of his music at the Proms and it further attests to his continuing growth as an artist – touching on subjects, themes and emotional depths light-years away from the early opera Greek. The performance was surely everything the composer could have wished for. The soloists were remarkably well-matched timbrally in their duo and each rose magnificently to their solo moment. The combined children’s choirs sounded flawless. Kazushi Ono presided over the performance with calm authority. 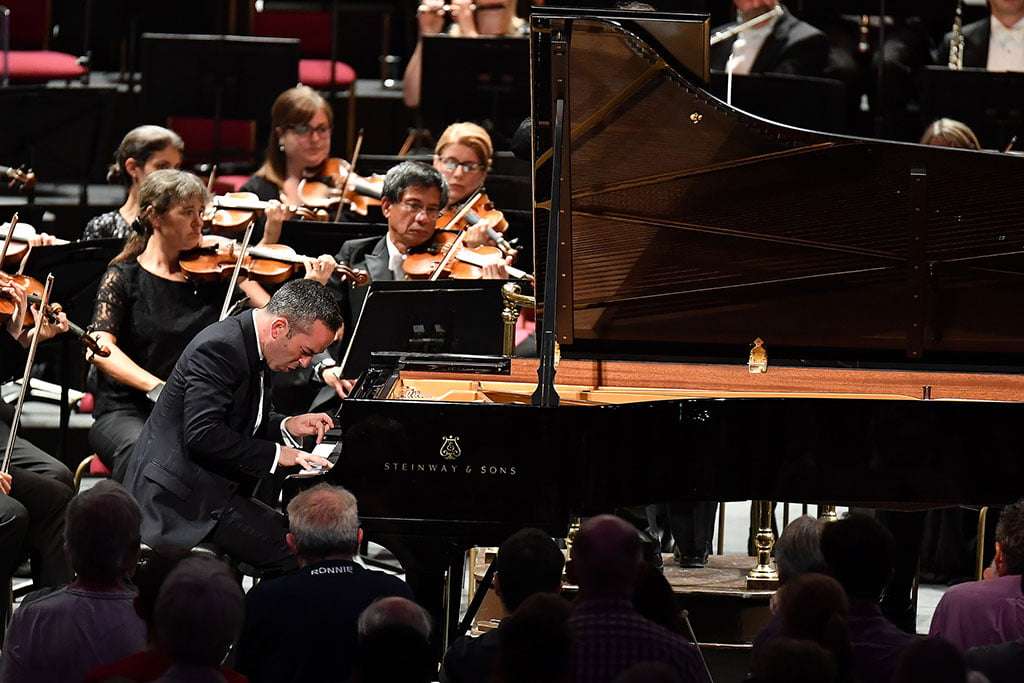 In the first half, Debussy’s Prelude to the Afternoon of a Faun was languorous and restrained, truly Debussy’s “orchestra without legs” – even the more animated passages were like mere ripples on a still pond. It was quite a jolt to be pitch-forked into the carnival atmosphere of Ravel’s G-major Piano Concerto. Inon Barnatan, carving a distinctive niche for himself with adventurous programming, was the superlative soloist. At first I fancied the orchestra and the pianist weren’t quite meshing rhythmically, although this may have been a trick of the acoustic. Doubts were quickly dispelled as Barnatan eased into the second subject with a perfect mixture of tender phrasing and precise detail. The miraculous slow movement began a little earthbound but evolved into a sustained study of quietly organic growth. The return of the main theme on cor anglais was marvellously done – all credit here to Alison Teale. The Finale was a thrilling meeting of pianistic and orchestral virtuosity. Barnatan’s encore of Mendelssohn’s Rondo capriccioso (Opus 14) was well-earned, although I felt some further Ravel or Debussy would have been more apt in context.

The between-movement clappers were out in force at this concert. The reverie of the slow movement of the Ravel was retrospectively dispelled by a burst of applause, even though the opening bars of Ravel’s Finale could and should have done the job far better. A single applauder started after the first movement of the Turnage but quickly thought better of it, perhaps in answer to the Zen question “what is the sound of one hand clapping?”. Alas every movement after that was greeted with a hefty dose of clapping, obscuring the subtle schema of Turnage’s piece (there was also a fair amount of walking out – really, in 2017?).

The point was well-illustrated to me in the performance of Beethoven’s Third Piano Concerto on the First Night. The magical shift to E-major at the commencement of the slow movement occurs, as it were, during what should be silence after the first movement and the shift to that key needs to be heard with the far-away home-key of C-minor still ringing in the ears from the end of the first movement. Instead the two movements were separated in effect by white noise, which – strictly sonically – is what the sound of applause amounts to. Where has this clapping trend come from? I do not believe it is a spontaneous outburst of enthusiasm, or at least it rarely is, nor will it wash to describe a concern about this as elitist. It is often painfully obvious from body language that the conductor or the soloist doesn’t want it. Performers tend to be diplomatic on the subject and I suppose few of them would want to actively turn down applause, but if he happens to read this review it would be interesting to know how Mark-Anthony Turnage felt about it. I for one had to imagine the clapping away in order to better appreciate the music. Only when Hibiki was finally finished did I clap, very loudly.