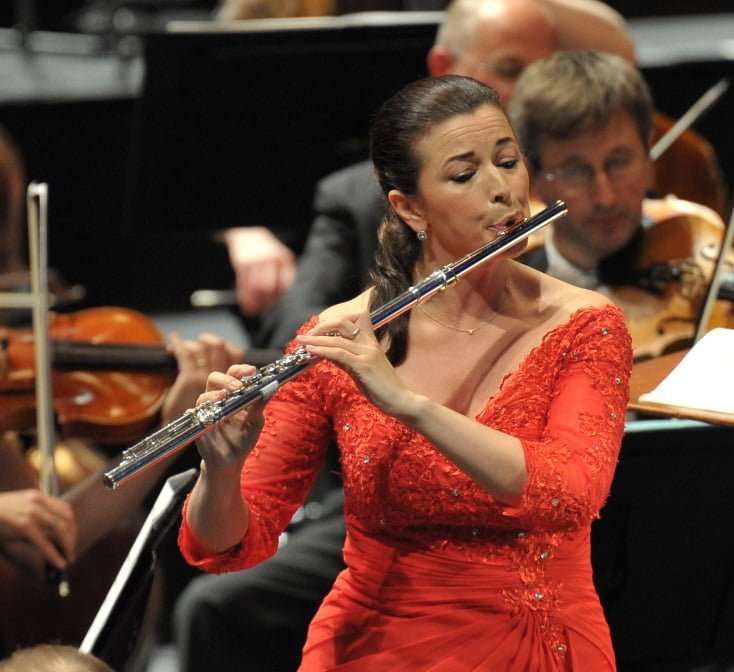 The ‘Symphony’ in different guises, this Prom opened with Britten’s Sinfonia da Requiem (1940) given maximum force and loudness at its outset, Edward Gardner maybe giving too much away too soon, and possibly unsettling the succeeding quiet music that was just a little tensionless and uncertain. But the ‘Lacrymosa’ rallied and built to emotional overspill and aggressive attack before falling away into the rampage of the ‘Dies irae’, given at thrilling speed but also creating some awkwardness in the execution. Best in this slow-fast-slow design was the ‘Requiem aeternam’, the music first drained of expression, but via some glowing and impassioned playing building to exorcism and acceptance.

At the other end of the concert, Janáček’s five-movement Sinfonietta (1926), quite a regular for all its extravagance in the brass department – thirteen extra players, the latter collective including additional trumpets, bass trumpets and a couple of euphoniums that introduce the work with an audacious statement supplemented by hard-edged timpani. Gardner’s account of this remarkable music was not the last word in subtlety, vividness being to the fore, but it was also yielding and eloquence was found.

Furthermore Gardner had the knack of mining the material for all its considerable worth, packing much discovery into a relative shortness of time, and ensuring that when the opening music returns, now with orchestral brass as well – what you might call the tout ensemble (thank-you Kenneth Horne for that one) – there was a proper bronze boldness and temperature-raising frisson generated to cap what had gone before.

However it was the works that were fore and aft the interval that shone brightest. Following the break Carl Nielsen’s Flute Concerto (also 1926) found Welsh-born Emily Beynon, principal flute of the Royal Concertgebouw Orchestra, in sparkling form, thoroughly at home in Nielsen’s oblique but alluring world.

This two-movement Concerto – the first of only two that Nielsen managed to write, the other being for clarinet, his plan being five, one each for the members of the Copenhagen Wind Quintet – is full of delightful contrariness. Whether lyrical or dancing, humorous or tender, this mix of innocence and experience, of elegance and ribaldry – and not forgetting the interjectory shadows courtesy of other instruments, not least a trombone – come together successfully if left to their own devices.

That’s exactly what happened here in this marvel for flute and orchestra: Beynon was totally absorbed into the music – and played every twist, turn and mood-swing brilliantly – but she did not impose upon it, and the BBCSO and Gardner offered a spry and transparent accompaniment. Nielsen’s mastery of setting up of the unexpected was left as he intended, and those tunes race round my head as I type this review. 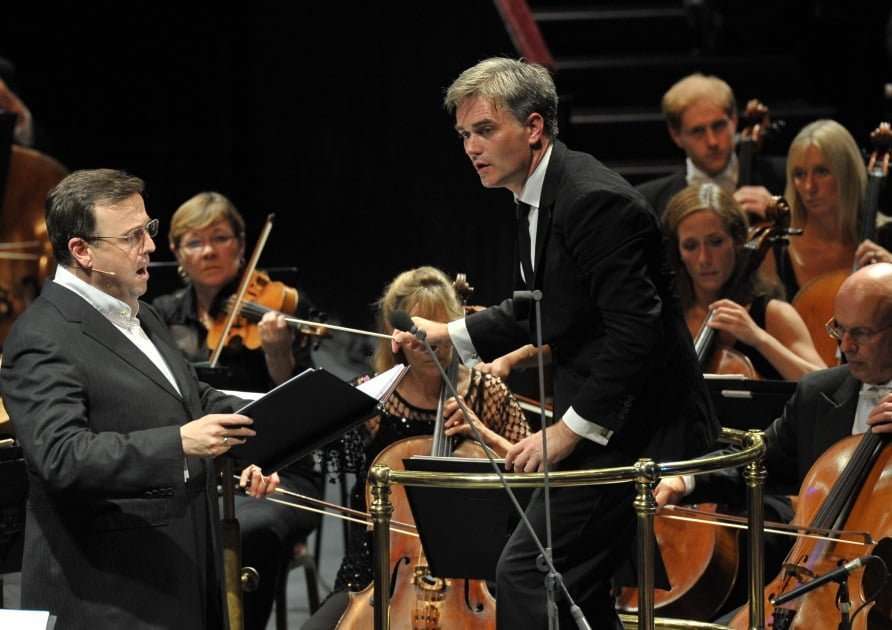 Which leaves Raymond Yiu’s also five-movement if running continuously Symphony (2015, the score printed as recently as August 19). There aren’t many works called Symphony involving a countertenor (which doesn’t mean there are none) and such-named works with voices begin with Beethoven 9 of course, continue with Berlioz, and were part and parcel of the outputs of such as Britten, Mahler and Shostakovich.

For his Symphony, Yiu has set texts by Walt Whitman, Constantine P. Cavafy, Thom Gunn and John Donne. His orchestra is not especially huge although woodwinds range from piccolo to contrabassoon and the percussion section embraces forty-plus instruments including “2 large pebbles (palm-sized)” although such a complement is not used gratuitously and requires only four players. Timpani is an addition, so too harp, piano and celesta.

For the 28 minutes that this premiere took, I was hooked and will be on the iPlayer to get more to grips with it. Suffice to say that I found Yiu’s kaleidoscopic scoring constantly painted pictures and beguiled the ears. I liked the inventive setting of the words and was wowed by Andrew Watts’s singing of them. In the first movement I was reminded of Tippett’s The Knot Garden (mostly because of the vocal writing) and in the second, for orchestra alone ‘Strong With Cadence Multiply Song’, Alice in Wonderland came to mind, a graceful waltz captivated, and some of the rhythms had me writing down “Cuban” (and, yes, I did think of George Gershwin); this is music of imagination and humour. 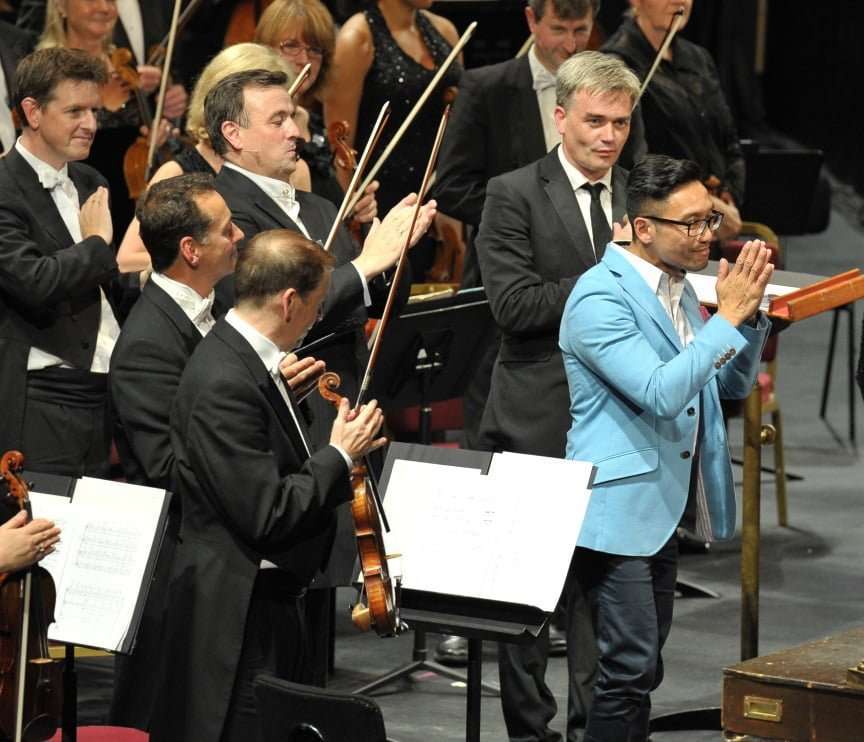 The remaining three movements all require the singer. The third blooms magically with wonderful colours and textures, the fourth conjures the nightclub, and got me thinking of Cleo Laine vocally and Malcolm Arnold in the orchestra (yet I am conscious that far darker feelings have inspired this particular section), while the Donne finale – evocative and ethereal, with echoes of Britten’s opera of A Midsummer Night’s Dream, some lustrous writing for violas and a solo for the contrabassoon – seems to win through to a definite sense of arrival so as to complete a personal and ingenious score that can justifiably be entitled Symphony.

I should now point out that my reaction to Yiu’s new work is somewhat out of kilter to Paul Griffiths’s programme note about it and also to the composer’s introduction for Classical Source (link below). But we all hear what we hear and make of things what we will. I hope that Raymond Yiu will find compensation in the fact that I really enjoyed and admire his Symphony and that I want to hear it again. I wonder if we may now have a release of Yiu’s orchestral music, to include Symphony and The London Citizen Exceedingly Injured. Edward Gardner and the BBCSO often appear on Chandos.