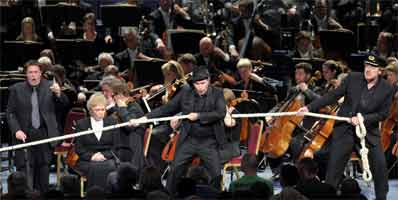 Edward Gardner is quoted in the programme for this Prom as finding Peter Grimes “very un-English”, and his collaboration with the American director David Alden on the 2009 English National Opera production – the basis for this exceptional concert – probably revealed what he was driving at. Alden’s vision for the opera owed more to German Expressionism than to any British tradition: it was an original, disturbing and brilliant staging that depicted a warped physical world wherein the characters’ psychology was paramount.

Vestiges of ENO’s staging were retained for this Royal Albert Hall revival, so audience members who missed it first time round may have been baffled by such apparently random accoutrements as the rag-dolls cradled by Auntie, the landlady of the Boar Inn, and her ‘Nieces’ (all of the singers revisiting their roles with the same depth as before, the younger women’s interdependence and low self-esteem in particular raising their significance well above that of dramatic ciphers). 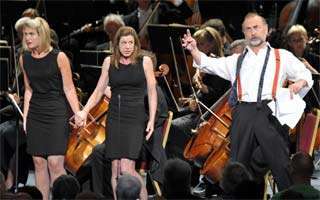 All but one of the principal performers from that first cast signed on for this Prom, although an indisposed Matthew Best was replaced at short notice by the reliable Mark Richardson as the lawyer Swallow. The only newcomer (Gerald Finley previously) was Iain Paterson as Balstrode, whose bluff, rounded authority made for as rich an interpretation as any I’ve heard across the decades.

Few readings of the opera can have been as meticulously characterised as this one. Even straight-as-a-die portrayals such as Felicity Palmer’s hypocritical Mrs Sedley had subtleties that fleshed out her ‘bigoted old trout’ personality, while in the less traditional corner Leigh Melrose’s wide-boy interpretation of Ned Keene (more dope peddler than apothecary) may have been unconventional but in context it was as fully-rounded as his mellifluous delivery. 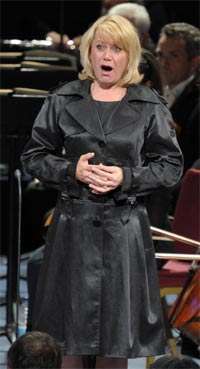 All the singing was excellent, indeed, with the redoubtable Amanda Roocroft, who has shown vocal vulnerabilities of late, on good form and successfully curbing the incipient metal in her voice. Roocroft has been the ‘go-to’ Ellen Orford for several years now; this vivid, compassionate portrayal showed why.

Stuart Skelton’s majestic account of the title role has noticeably grown in stature since his already-remarkable Coliseum appearance. As composed by Britten (with, of course, the voice of Peter Pears in mind), the tortured fisherman makes deceptive demands on any tenor, whether those of the lyric variety (Anthony Rolfe Johnson, Philip Langridge) or Heldentenor kings like Jon Vickers and Ben Heppner who have commanded the part across the globe. 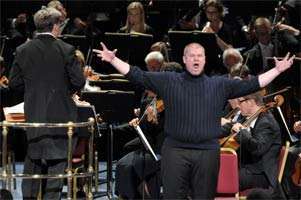 Skelton is arguably the most complete Peter Grimes of them all, with a range of colours and a depth of acting that few of his predecessors have matched. The man is damaged, clearly, but in this exposé his social difficulties have a basis in autism that no-one in the Borough’s day could have understood. The superb ENO Chorus turned on this inadequate man, snarling and suspicious, with all the prejudice of a small-minded community, so that Skelton’s Grimes responded in the only way he knew: by defiantly standing his ground. Yet in private the man was wracked with doubts and misery, as Skelton showed in his controlled, untiring account of “In dreams I’ve built myself some kindlier home”.

For the second time this Proms season a London opera orchestra has left its pit and emerged blinking into the daylight. Like its Royal Opera counterpart (Prom 11: The Trojans), the playing of the ENO Orchestra gained a new dimension of immediacy. Edward Gardner conducted with fervour and momentum, to the extent that the six Interludes felt inappropriately named, so completely did he integrate them into the dramatic through-line. The orchestra was on blistering form throughout, from the keening violins and fat tuba sound of ‘Dawn’ to the tailing foghorns of the opera’s climax.

Alas, that special moment was ruined by an asinine outburst of clapping from several audience members – shocking but entirely consonant with the instant whoosh of cheers that had already greeted the close of each act. Really, what is it about the Proms that its audiences must race to applaud before the final notes have subsided? Few badges of musical insensitivity equal that of the boorish spectator desperate to break the spell with some self-advertising noise; but when, as here, applause butts into the music simply because a loud bit has given way to dramatic silence, then ignorance has triumphed.