“Join the BBC Concert Orchestra and some of CBeebies’ best-loved presenters and characters in a special musical journey.Aimed at 0- to 5-year-olds and their families, this Prom takes the audience on a journey through time and space, from dinosaur adventures with Andy to swashbuckling treasure-hunts with Gemma and stargazing with Chris. The magical world of CBeebies is brought to life by orchestral classics.” [BBC Proms website] 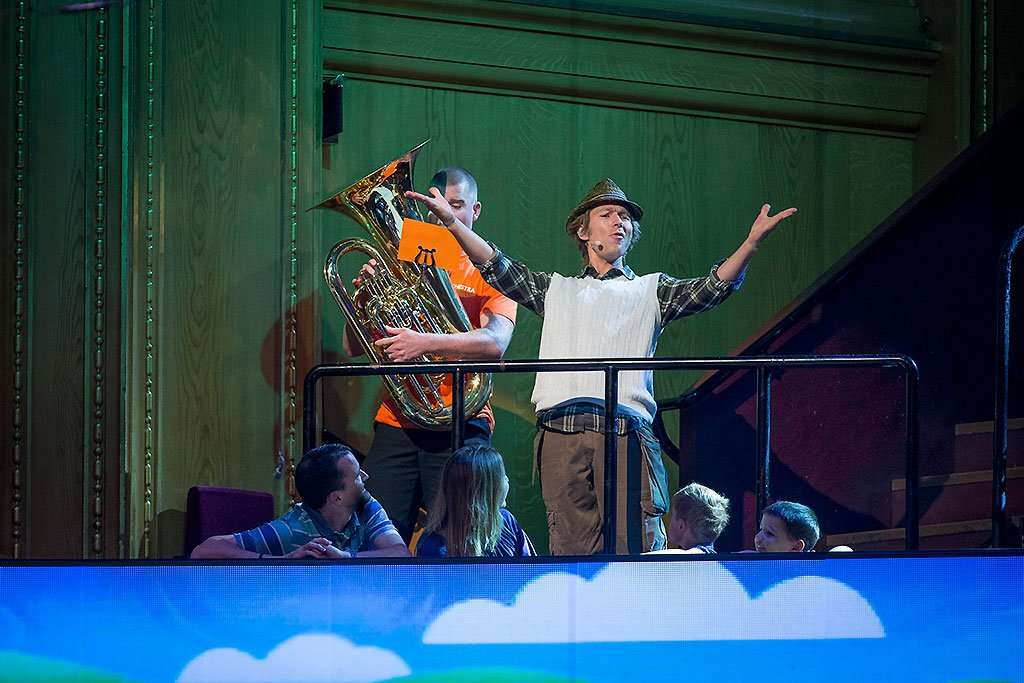 After attending the 2014 CBeebies Prom and thoroughly enjoying it, we were anticipating another memorable morning. As we arrived we were greeted by human-sized characters from several CBeebies programmes and there was a palpable sense of excitement amongst the young audience.

As 11 o’clock arrived, the musicians from the BBC Concert Orchestra entered wearing their colour-coded T-shirts according to which section they were in. A great idea, although an opportunity was missed and unfortunately this scheme wasn’t explained to the children.

Upon taking their places, the Orchestra played a rousing medley of CBeebies theme tunes, arranged by Steve Sidwell and accompanied by footage on the large screens. Then the presenters entered and I shall not forget the look of dumb-struck amazement on my four-year-old’s face when she first saw these televisual megastars in the flesh!

However, unfortunately from then on we were left a little disappointed. Nancy kept asking when it would start properly, and I could see what she meant. There was a sense that it never really got going, was too slow-paced, with too many camera changes by the presenters and not enough focus on the Orchestra and the music. The concept and story were loose and both children and, dare I say it, parents lost interest. 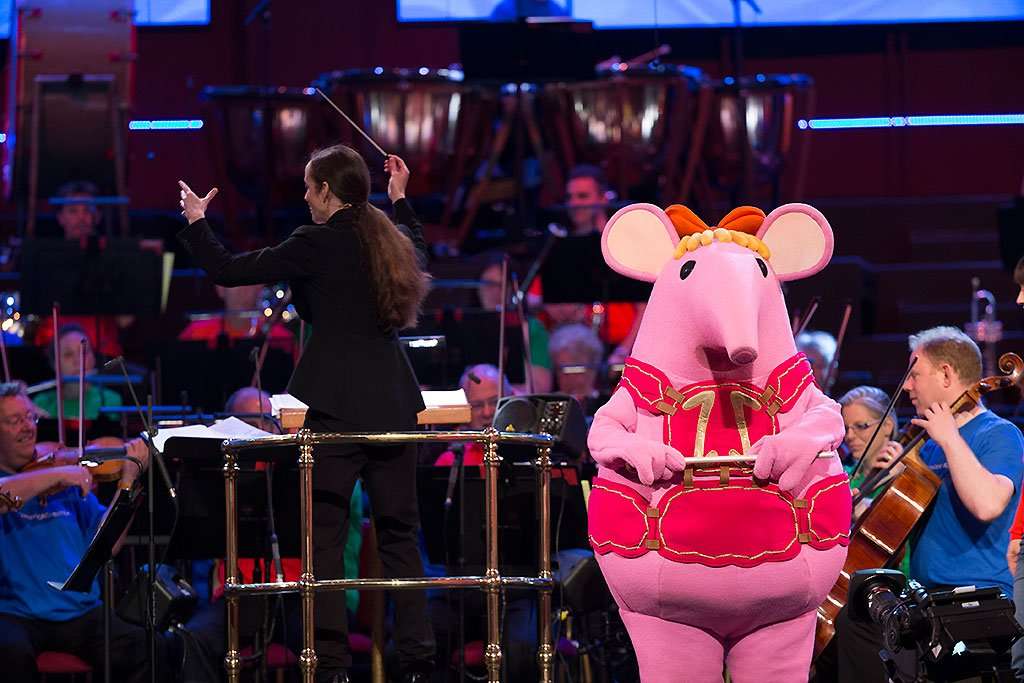 The concert was fairly light on musical pieces, and although we were told the titles, we weren’t told what was happening in the music or what we could learn from it; instead, there was a feeling that each selection was being used as a stop-gap before the next scripted caper from the presenters.

Indeed, there was a lack of cohesion between each ‘scene’ and the story jumped from looking through binoculars at the countryside – the Scherzo from Beethoven’s ‘Pastoral’ Symphony to pretending to be on a pirate ship, Erich Wolfgang Korngold’s music for The Sea Hawk film. We were then asked to imagine Dinosaurs and Elephants, rather bizarrely partnered with William Shakespeare, to Dance of the Knights from Prokofiev’s ballet-score for Romeo and Juliet.

By now, the audience seemed to have lost track of what was going on and as a result there seemed to be a lot of toilet trips and noise. This of course comes with the territory at a concert with such young attendees but this didn’t happen last time when small bottoms were firmly glued to seats throughout the hour. 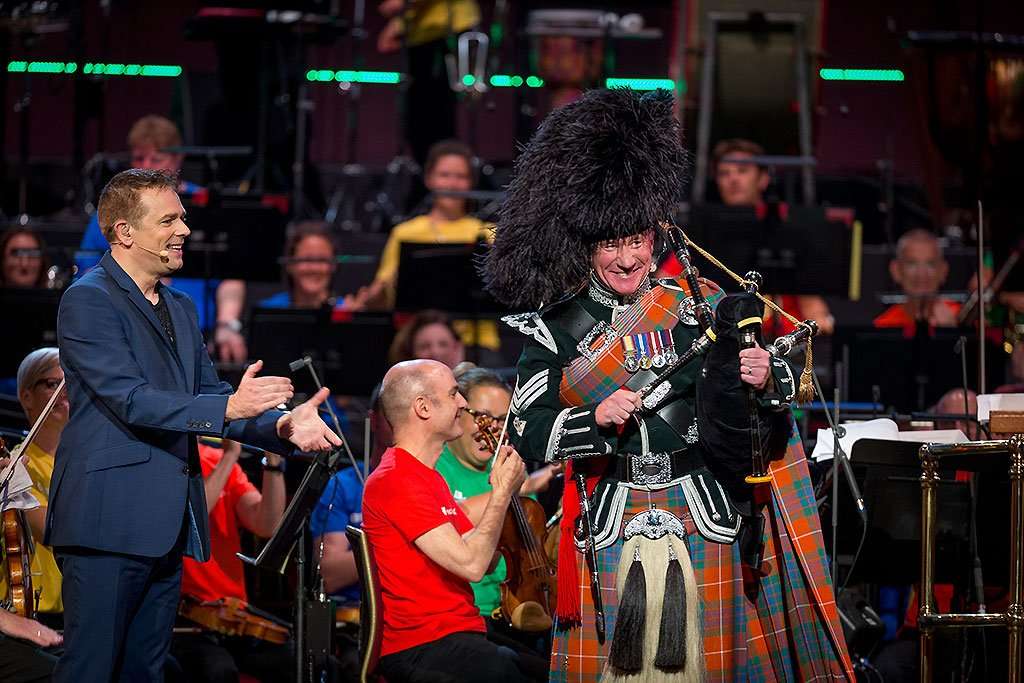 An audience participation section in conjunction with the animated character Tree Fu Tom and accompanied by Peter Maxwell Davies’s An Orkney Wedding with Sunrise (heavily cut), worked well, with Robert Jordan as the bagpiper. Then we moved on with the ‘2001’ opening of Richard Strauss’s Also sprach Zarathustra. This of course accompanied a section about outer space, a box appearing containing boots and a helmet, and the presenters half-heartedly pretending to be transported.

The Prom culminated in a rather chaotic Conga led by the presenters around the Hall, up and down the aisles and along rows. The musical accompaniment may have been wonderful but was lost in the noise of adults, children and rather exasperated-looking presenters, one of whom came down our row and looked like he’d rather be relaxing in the sun!

All in all, we left a little downhearted and feeling that the whole thing lacked cohesion and imagination, hastily cobbled together. However it might work better on TV; we shall literally see in a few weeks when it is broadcast on CBeebies.

The idea of this Prom (with a second go as Prom 58) was to introduce young children to the joys of classical music, and although this was achieved to a certain extent, if there is a future such occasion it would be good to see the BBC including appearances from characters such as Melody or The Zingzillas, whose programme content is expressly about teaching about music.

My kids left happy enough and I think although the Prom was not the greatest, having the opportunity to take my children to such an iconic and beautiful building as the Royal Albert Hall made up for any shortcomings.