Following Bernard Haitink’s semi-official farewell to UK concertizing was never going to be easy. (No matter that others have found more Romantic subjectivity or philosophical depth in Bruckner’s Seventh.) The present trio of works by composers with American links looked relatively small beer on paper and so it proved. At least we had the continuing presence of one of the World’s great orchestras to soften the blow.

Interpretatively speaking one expected something innovative to come from Andrés Orozco-Estrada, Colombian enough to have been dubbed an accelerando conductor on this site! Now doubling as an Austrian citizen, one moreover set to inherit the Vienna Symphony Orchestra in a couple of years, he has a demonstrative podium presence. On this occasion at least, his lively physicality did not, however, elicit performances of great passion or distinctiveness.

The opening item, The Noonday Witch, was interrupted by a ringing mobile phone and Orozco-Estrada restarted the piece with good grace, as yet unaware that on a night of political shenanigans in the UK parliament, such electronic devices would provide a constant irritation. As with the other orchestral ballads Dvořák based on folktales by Karel Erben, the music is beautifully orchestrated but purely illustrative in nature, mirroring the gruesome narrative rather than creating its own. That said, unlike The Golden Spinning Wheel, heard at the start of the 2019 season, it does not outstay its welcome. It was similarly tagged as a Henry Wood Novelty, having been given its UK premiere by Wood and his Queen’s Hall Orchestra in 1896. The Musical Times was predictably unimpressed: “The ‘Noon Witch’ has a repulsive story, the choice of which shows regrettable want of appreciation of fit material for musical treatment. Dvořák is a master of orchestration but when he seeks to depict the strangulations of a baby he abuses his abilities and degrades his art.”

Erich Wolfgang Korngold is still regarded with disdain in some circles, for all that his Violin Concerto has lately entered the standard repertoire. I’m not sure this performance will have done anything to convince the sceptics. Leonidas Kavakos has been playing the work for years. Looking like an Athenian bank manager in 2001 he recorded it for a Korngold DVD with the Frankfurt Radio Symphony (long before Orozco-Estrada directed that ensemble). In 2010 he gave a fine Proms rendition with Ingo Metzmacher and the Deutsches Symphonie-Orchester Berlin. In 2012, visually hippy-ish, he played it with the Berlin Philharmonic under Dudamel. None of those accounts were as torpid as this one. The Vienna Philharmonic provided a soft focus comfort blanket with celesta and vibraphone making alluring tinkles sometimes missed in more demonstrative, heavyweight, post-Heifetz performances, yet there was almost no drive, charm or humour. Instead of carrying us forward the soloist displayed his lovely smooth tone. The outer movements concluded with exaggerated sprints to remind us that we were still alive and not listening to chamber music. 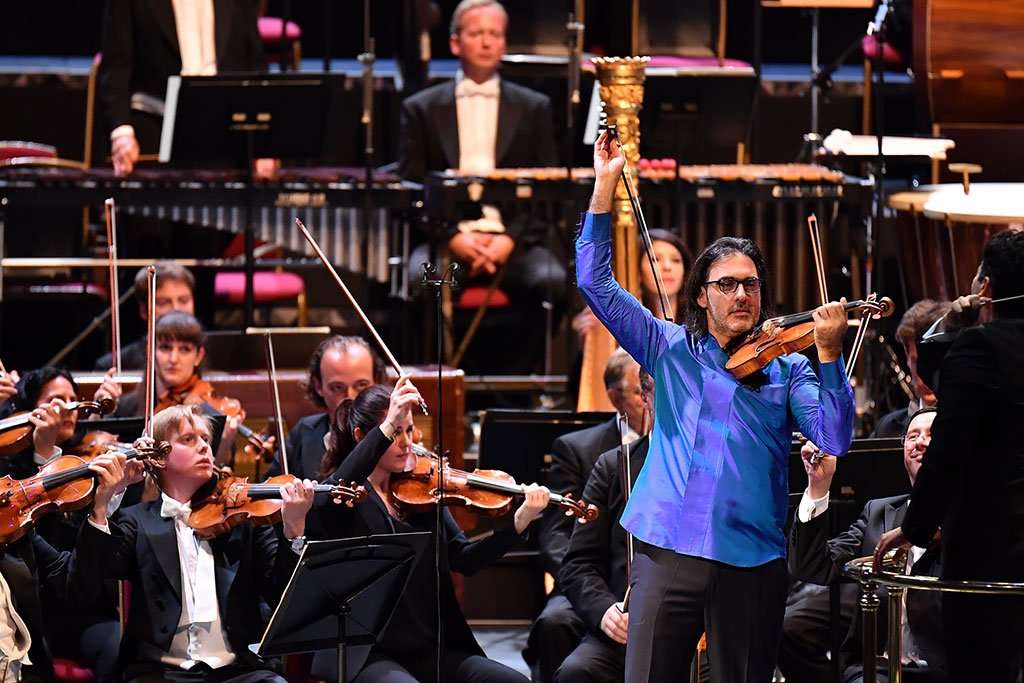 There was an encore, Tárrega’s for-guitar Recuerdos de la Alhambra as transcribed by Ruggiero Ricci. This almost impossibly difficult arrangement proved that Kavakos can still do the business, refinement maintained until the last few skitterings. He wore a bright blue smock and dark jeans: John Drummond would probably not have approved.

After the interval the ‘New World’ received an unexceptionable reading in which new and old were blended in ultimately uninteresting ways. Violins were not placed antiphonally but the first-movement exposition repeat was observed. Speeds were mostly on the slow side with less flexibility within the phrase than you might expect and a tendency to dissipate momentum (as felt more egregiously in the Korngold). The urge to take subsections at a relaxed tempo was most pronounced in the first movement where iterations of the ‘Swing Low, Sweet Chariot’-like idea always seemed overly deliberate though not necessarily to the same extent each time. It goes without saying that there was some glorious playing in the slow movement, the woodwind favouring a blander more conformist timbre than might once have been the case, strings (and horns) golden and glorious at any decibels. There were at least four electronic descants in my vicinity impairing continuity even without the astonishingly discourteous behaviour of those apparently in the grip of chronic bronchitis. The Scherzo and Finale were less becalmed.

An extra was appended, Josef Strauss’s Ohne Sorgen, Polka-Schnell, Opus 271, a lollipop open to the kind of orchestral vocalising and audience participation you either love or hate. Mariss Jansons conducted it with particular brilliance at the New Year’s Day Concert in 2006. The title means ‘Without a care’. If only…