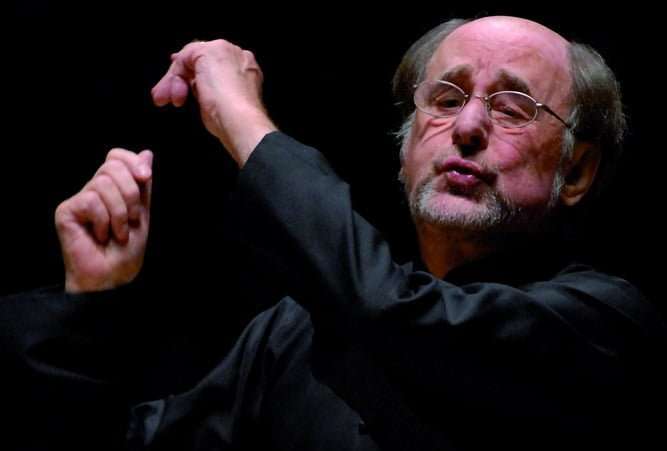 The 80-year-old Sir Roger Norrington was back at the Proms, as conductor laureate, with his old flame from Stuttgart, the orchestra with which he grafted ‘period’ manners onto modern instruments, to marked effect in Beethoven, less successfully in the romantic repertoire. The sound he gets from the Stuttgart players, built on a rigorously applied non-vibrato from the strings, is idiomatic, often quirky and well-suited in its focus on classical narrative. I liked the double basses being placed at the back of the stage – it gave visual confirmation of the strings’ openness, clarity and tonal separation.

With such a sophisticated palette, Beethoven 8 could hardly fail, and Norrington, his minimalist conducting style still energising the music with characteristic fleetness and bite, was masterly in the rhythmic enhancement that peppers the score. There was also a piquant element of risk to the various finely played wind solos pirouetting above some slippery string accompaniments, and, in the first movement, he judged precisely how far he could go with inflating the tension in the development. Whether or not you took issue with his speeds (based on Beethoven’s notorious metronome markings) and his unique colouring, it was clear that Norrington inhabits this music to a rare degree. The detail never sounded mannered, and it fired up the web of connections seething away, notably so in the mercurial finale, which glittered with a light wit and subversive wisdom, poised between bucolic pleasure and sophisticated delight. I don’t buy his twinkly old uncle act in between movements – every gap was greeted with a perfunctory and mood-breaking dribble of applause, encouraged by the conductor – but that seems to be his shtick these days.

The ‘Romeo Alone’ extract from Berlioz’s ‘Dramatic Symphony’ lacked that tremulous heart-on-sleeve quality at the heart of Berlioz’s music. The Stuttgart players retreated effortlessly into a precisely pitched pianissimo for the pale opening, and later they erupted in fine French rhetorical style. It seemed, though, that Norrington was more concerned with refining the unique glassy surface of Berlioz’s sound at the expense of using it as a means to a romantic end – and it’s on this stylistic cusp where Berlioz can sound a bit of a windbag.

There was a similar top-down displacement at work in Dvorák’s ‘New World’ Symphony – an astonishing amount of detail and some ravishing wind-playing reeling the ear in, but you wondered to what end. Despite some elegant and accommodating rubato in the first two movements, there was an underlying sense of haste that rather eclipsed Dvorák’s moments of wonder at being in America set against some powerfully written expressions of acute home-sickness. Moreover, the strings’ lean, airy timbre wore a bit thin and, despite some impressively athletic playing, sounded anonymous.

While being pulled in all directions by Norrington’s idiosyncratic ear, abundance of localised insight and a sense of vertiginous excitement in the finale, as well as by the spellbinding playing, I could hardly say I was blown away by the sheer drama of this potentially most romantic of symphonies. And clapping once again intervened the Symphony’s course. However interesting, it certainly wasn’t a performance that justified an encore. Nevertheless, there was one, the noble ‘Prélude’ from Fauré’s music for Pelléas et Mélisande.