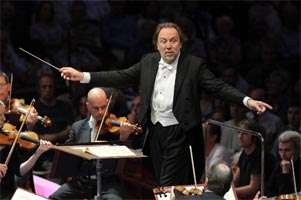 Mendelssohn’s capacity to surprise is not the first feature one associates with his music, but this Prom was full of the unusual emerging from the familiar. Of the four works performed, only the E minor Violin Concerto appeared in its usual guise, the remaining fare being performed in the original, pre-publication versions now available as Bärenreiter scores edited by Christopher Hogwood. That the orchestra should be the Leipzig Gewandhaus, of which Mendelssohn himself was once Kapellmeister, seemed only appropriate.

Gewandhaus Music Director since 2005, Riccardo Chailly has been responsible for promoting these earlier versions of Mendelssohn’s works. It wasn’t just the unfamiliar versions of old favourites which surprised, however, but the incredible clarity of sound and crisp articulation which Chailly has honed in the Leipzig orchestra. The rich mahogany sound of the Gewandhaus strings is still there, but they never cloy. Chailly had antiphonally-placed violins, with eight double basses (reduced to six for the concerto) placed left of stage. Woodwinds were light and characterful, and Chailly ensured that the excellent brass never over-dominated. He also encourages use of hard sticks for timpani, especially notable in The Fair Melusine, giving it a thrilling injection of dash. It was as if the patina built up on these works since the Victorian age was scoured away, Chailly balancing tradition with ‘historically informed’ performance practice.

Each half of the Prom opened with an overture. Mendelssohn was less than impressed with Victor Hugo’s play Ruy Blas, yet consented to compose opening music for it, completing the task within three days. There are brief changes and cuts around Letter L from the Breitkopf & Härtel score, with more brass and timpani punctuating the string phrases. Chailly led a breezy account, the lightness of touch from the strings lending a Spanish elegance to the central section. 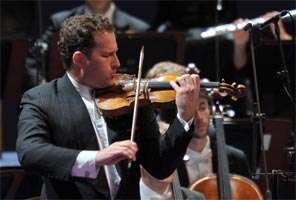 Nikolaj Znaider was the soloist in the familiar Violin Concerto (which also has a playable original version), lavishing his aristocratic tone in, what could be considered in the context of the rest of the concert, a rendition rich in old-fashioned values, not unlike Grumiaux or Milstein. It was a performance full of sweetness, nobility and restraint, with some daring use of soft dynamics. Chailly kept the orchestral response alert, whipping up the tempo for the coda to the first movement. Znaider’s technique is impeccable, but he never sets out to dazzle for the sake of it. The finale was exceptionally light and airy. For an encore, Znaider offered clean lines in a palate-refreshing ‘Gavotte’ from J. S. Bach’s E major Partita.

Mendelssohn composed The Fair Melusine following a performance of Conradin Kreutzer’s opera, whose overture he disliked. His response is a fine example of his pictorial tendencies, composed at a time when he lived in the Rhineland, perfecting his watercolour techniques in his spare time. Melusine is a water-sprite or mermaid and it isn’t too far-fetched to hear the rippling prelude to Wagner’s Das Rheingold in the burbling woodwind and string figurations which feature in this marvellous score, which Mendelssohn felt was one of his best works. The original version, rather than a sprawling mess the composer cleaned up later, is, if anything, more coherent and tightly argued, the revision adding more padding – the development is significantly different and the coda is briefer, and tautly conducted by Chailly.

The Prom concluded with the ‘Reformation’ Symphony, here 94 bars longer than eventually published, the composition of which was begun during Mendelssohn’s first visit to Britain in 1829, while he was working on his ‘Scottish’ Symphony. He was inspired to commemorate the 300th-anniversary of the Confession of Augsburg, setting out the Protestant Reformation of 1530. Its solemn Andante introduction includes the ‘Dresden Amen’ (later used by Wagner as the ‘Grail’ theme in Parsifal), before the urgent Allegro con fuoco was unleashed with growling double basses underpinning the orchestra’s attack. The second movement Allegro vivace is not really a typical Mendelssohn scherzo, but a lilting woodwind-led miniature, Chailly encouraging light, springy textures. He also set a flowing pulse for the Andante. The main difference in Hogwood’s edition is the restoration of a recitative-like bridge between the third and fourth movements, featuring solo flute, exquisitely played by Katalin Stefula, which introduces the theme of the first line of the chorale ‘Ein’ feste Burg ist unser Gott’. The symphony’s conclusion is very different, featuring an invigorating march before the chorale-led apotheosis. Chailly enjoyed himself and his infectious enthusiasm made this as convincing an account of the work as I’ve encountered.