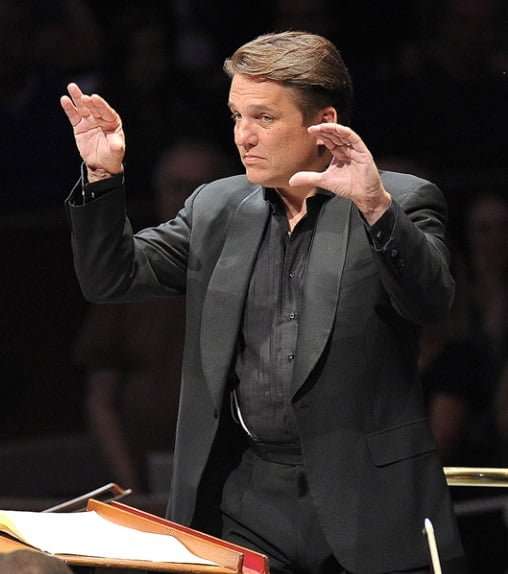 This eighth Free Prom, opening the gateway to classical music for anyone new to it, was programmatically a triumph even if it was comparatively ordinary when judged against others from this Season. The Lanterne of Light by Guy Barker was sandwiched between two standards, Danse macabre and Carmina Burana – both no doubt intended to sweeten the pill of the new work. Such sweetening was unnecessary.

With a diabolical theme running throughout the programme, Charles Mutter (leader of the BBC Concert Orchestra but here promoted to front-of-stage soloist for what is an obbligato role) served up a technically fine but functional violin solo during the Saint-Saëns. Normally played from the leader’s desk, Mutter standing in front of the orchestra was unwise, giving rise to timing issues and a feeling of disconnection.

If Danse macabre felt like a warm-up act to some better event, Guy Barker’s trumpet concerto was that better event. Barker is a jazz musician and trumpeter who for the past 15 years has spent more time composing and arranging than playing. Last year Barker conducted the Paloma Faith Prom; his piece is more firmly rooted in the classical idiom. In the programme book, Alison Balsom explained how Barker wanted an epic subject, along the lines of Paradise Lost, but the piece became much darker and more about Hell, despair and the Seven Deadly Sins.

The 27-minute Lanterne of Light is in five movements, the first three and the final two played without a break. The trumpet summons the angels at the start with, chief amongst them, the charismatic Lucifer. Violas, followed closely by violins and cellos, join the soloist before a plethora of tuned percussion is added. God, represented by a huge burst of sound from brass and percussion, appears three times in Messiaen-like harmony, the third signifying the Fall of Lucifer. 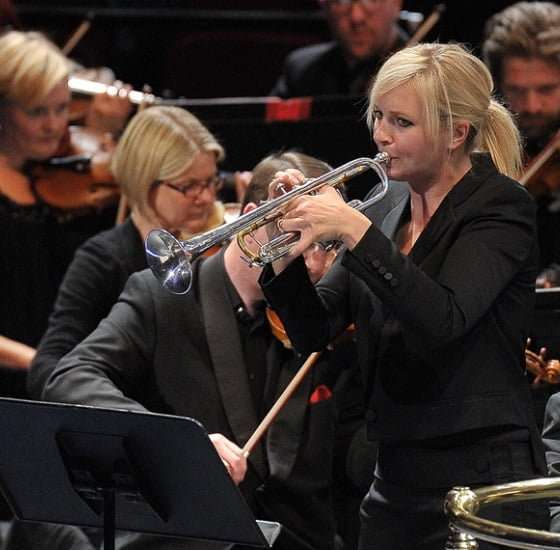 The second movement (‘Abyss’) portrays the desolation of the place where the souls of the dead went to wither and makes way for a more dissonant soundworld as exotic orchestration, including three alto flutes, provides atmospheric colour to accompany the cries of Lucifer’s trumpet. The third (‘Green-Eyed Monsters’) depicts Beelzebub leading a revolt against Lucifer in a diabolical tango that uses to good effect a variety of percussion and low brass – the increasingly virtuosic trumpet’s flirtatious melody expertly negotiated by Balsom.

She now attached a microphone to her instrument ready for ‘A Very Basic Instinct’ portraying Asmodeus, the Demon of Lust. Here Barker makes effective use of electronic echo effects and reverb combined with a Miles Davis-like ‘wah-wah’ trumpet to suggest the amorality of the demon. Contrabassoon, tuba and double basses introduce Stravinsky-like parallel triadic harmony in a 12-note canon that reminds the listener of the chaos brought about by unbridled gluttony. The finale is led by a side-drum’s dramatic pounding closely trailed by an angular trumpet melody as the soloist argues ceaselessly with the orchestra. In the end Lucifer reasserts his authority as Lord of the Underworld, Satan. The Lucifer theme from the first movement reappears though it is painted in darker hues as it now comes from the place where the Seven Deadly Demons reside.

Keith Lockhart’s clear and unambiguous direction helped this first performance enormously. Balsom, perhaps better known for her more commercial output, left us in no doubt that she is one of the UK’s leading trumpeters. 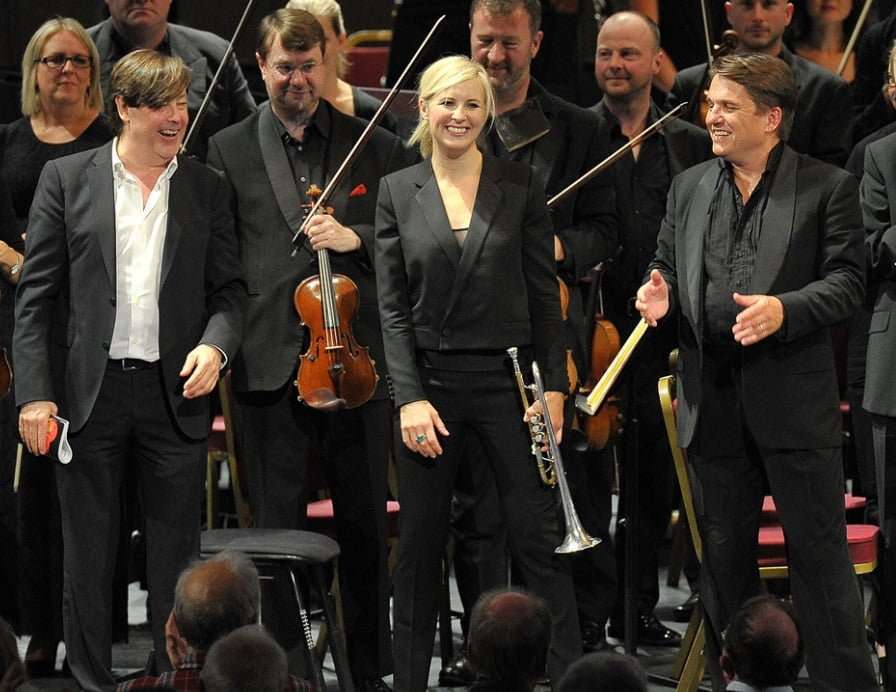 After the interval children’s and adult choruses were more than a match for Carl Orff’s orchestral forces. The words were always audible even if sheer numbers meant the choirs weren’t as agile as a smaller group might have been. Of the three solo vocal parts, the baritone has the lion’s share, with the tenor appearing in just one delicious and mouth-watering number concerning ‘Olim lacus colueram’, the swan being roasted. Introduced by the note-perfect Sarah Burnett on bassoon, Thomas Walker’s eye-watering command of this challengingly brief setting was remarkable; silent for some forty minutes without uttering word, the tenor then must sing a high A, from cold and in tune.

The soprano solo appears in ‘The Court of Love’ third part. BBC Radio 3 New Generation Artist, Olena Tokar’s bell-like clarity was awesomely beautiful, most notably in ‘Stetit puella’. And while the pitch of the boys’ and girls’ choirs sagged a bit in ‘Amor volat undique’, the interaction between these young singers (all performing without music), the soloists and the orchestra was commendable.

The weakest link here was Benjamin Appl – another Radio 3 NGA – who’s quite beautiful baritone voice, perfect for Lieder, was too light for much of Orff’s earthily debauched tavern ditties. The more reflective ‘Dies, nox et omnia’, with its airy falsetto and gentler style, suited him better.

Lockhart, in the main, left the BBCCO to its own devices, concentrating his attention upon the choirs. In the orchestra-only dance, ‘Uf dem Anger’ the trumpet wrong-note at the start together with strident trombones left it feeling scrappy; however, on the whole the BBC Concert Orchestra was largely a reliable, if under-appreciated participator.

In a concert designed to attract new audiences it is important to strike a balance between familiar and new music. It was encouraging to see the RAH over three-quarters full and, judging from a very unscientific poll of people sitting near me, many weren’t regular concertgoers. Each person that I spoke to enjoyed the Prom. This was a well-thought-out, well-presented programme with something for everyone.