“In a celebration of the 70th anniversary of BBC Radio 4’s Desert Island Discs, Kirsty Young interviews guests from the series and introduces the most popular music choices, including Bach’s Toccata and Fugue in D minor (BWV 565), Coates’s ‘The Dam Busters’ March and The Sleepy Lagoon; and excerpts from Beethoven’s ‘Emperor’ Concerto, Coleridge-Taylor’s The Death of Minnehaha, Elgar’s Cello Concerto, Handel’s Messiah, Puccini’s Madam Butterfly and Tosca, plus arrangements of favourite Beatles songs.” [BBC Proms website] 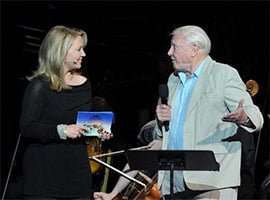 Perhaps it was the unknown quantity of this Prom that led to a smaller than usual Arena and Gallery audience, but it certainly hadn’t affected seat sales. And those who did join in the 70th-birthday party for a Radio 4 institution presented by a much older Radio 3 institution were in for a treat. Roger Wright may have (inadvertently) stumbled on a solution to the Last Night problem.

This was a hugely enjoyable evening. Yes, it was hard to expect the BBC Concert Orchestra to match the tonal beauty of Europe’s finest (Berliner Philharmoniker and Leipzig Gewandhaus), but these players excel in a variety of music, as their topping and tailing with Eric Coates’s favourites showed. By the Sleepy Lagoon is the signature-tune to Roy Plomley’s evergreen interview-with music programme which illustrates a guest’s life though the choice of their eight pieces of music they would take to a desert island. Started in 1942, Desert Island Discs has (bar an off-air period from 1946 to 1951) welcomed some 3,000 guests (sometimes more than once). As presenter (and current incumbent of the DID interviewer’s chair) Kirsty Young remarked at the end of the concert, it wasn’t only a significant birthday for the programme, for this year marks the 60th of the BBC Concert Orchestra, here under principal conductor Keith Lockhart. The concert’s format was slightly different to the programme – we got to hear whole pieces, although in the case of the two concertos we only heard first movements (Elgar’s Cello Concerto, despite the confident tone of Nicolas Altstaedt, was a curious choice as it ends so enigmatically – the Adagio would have served better). 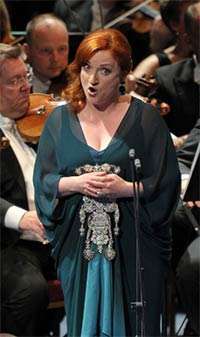 And we got a series of guests who reminisced about their time on the programme. Darcey Bussell introduced Prokofiev’s Romeo and Juliet and John Sessions revealed a passion for Puccini, cueing Ailish Tynan’s ringing renditions (if with muffled diction) of two arias.

There were also two palm trees – one beneath Sir Henry Wood’s bust (making him look like a large coconut), and a much smaller one on the table next to the high-backed leather armchair for Kirsty Young. The electronic display at the back was all tropical blue sky with palm fronds wafting, which those online may have been able to see – there were two static cameras filming as a test for possible future online visuals.

Roger Wright had announced before the concert went live to Radio 3 that Sir Willard White was ill and that his replacement had hot-footed it from rehearsals at the Royal Opera House; Bryn Terfel. Kirsty that his luxury, back in 2003, was Cardiff’s Millennium Centre (you got the impression that she might not have allowed him that). He is one of the few bass-baritones that has centenary-boy Samuel Coleridge-Taylor’s The Song of Hiawatha in his repertoire, and here he sounded in better voice than he had in Delius’s Sea Drift on the opening night, well-backed by the Huddersfield Festival Chorus, if with slightly diffuse attack. The choristers were able to shine (notably without scores) in the two excerpts from Messiah, with authentic hard sticks on the timpani in the accompaniment but with inauthentic clarinets; an arranger was not specified in the programme. A smattering of the seated audience stood for ‘Hallelujah’ including yours truly.

Our first soloist was also one of the previous castaways, interviewed by Kirsty from the organ loft. Wayne Marshall dedicated his louder-than-life performance to Carlo Curley who died on 9 August. Marshall’s blasting of the Toccata and Fugue in D minor seemed spurious, especially in the crunching closing section. The programme-book (in a feature for all of the pieces) told that this J. S. Bach piece (if in fact by him) had been chosen on DID 36 times, by such diverse luminaries as Janet Baker and Arthur C. Clarke, if not by Marshall. 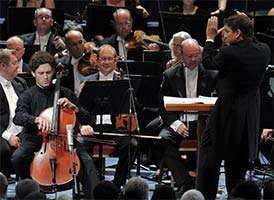 An excerpt from Plomley’s interview with Jacqueline du Pré preceded the first movement of the Elgar (no pressure then!), but all the other ‘guests’ were live, including Kirsty Young’s two immediate predecessors as presenter, Sue Lawley and Michael Parkinson. And there is something quite overwhelmingly special when Sir David Attenborough walks on. When he goes on to encapsulate the wonder of music in general and the Proms in particular by remarking on his own recent discovery – just three nights earlier – of Lutosławski’s Third Symphony, it was like him discovering a new species and sharing it with enthusiasm and awe. 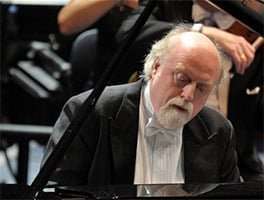 Peter Donohoe (whose luxury for the desert island was a water-bed) joined the BBC Concert Orchestra for the first movement of Beethoven’s ‘Emperor’ Concerto, achieving the exact opposite effect of Wayne Marshall’s playing with some exquisite pianissimos. This followed Off Side by Rhet Stoller, for over forty years the signature-tune for Match of the Day, complete with rattles and whistles. That had been chosen twice by Mrs Mills and Simon Weston. He was present thirty years on from his injuries and offering – appositely during the Paralympic Games – a moving tribute to the spirit of those who survive natural and man-made atrocities and to the memory of those who do not.

DID musical choices are not restricted to classical music, so each half had a nod to popular song. In the first we had a three-movement suite of four Beatles numbers, in full-orchestra arrangements by Rob Mathes, featuring solo oboe in Eleanor Rigby, trombones in Strawberry Fields Forever leading to massed strings in Penny Lane, while The Long and Winding Road, was poignantly led by solo cello. Tracks by The Beatles have been chosen over 250 times. In the second half we had four vocalists – Anna-Jane Casey and Simon Butteriss joining Tynan and Terfel and the Huddersfield Choral Society – in a medley of the most-chosen songs. Butteriss gave us his Noel Coward in Mad Dogs and Englishmen, with flame-haired Tynan adding Judy Garland and Edit Piaf, before Terfel sang What a Wonderful World with a couple of phrases growled in honour of Louis Armstrong. The chorus segued neatly between Imagine and a short burst of Underneath the Arches, before Anna-Jane Casey added an evocative Je ne regrette rien. All that was left was My Way, the audience joining in with the ‘chorus’ verses. So great fun, a splendid celebration of a much-loved institution; and it was Prom 70, too!