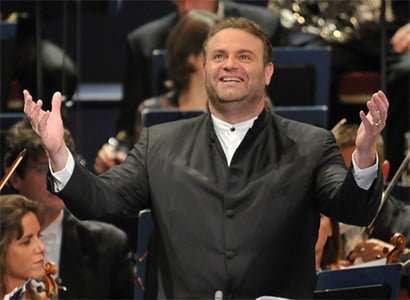 Giuseppe Verdi has not done as well during this year’s Proms as his bicentennial buddy Richard Wagner. Even playing on a neutral ground in Kensington, a complete-opera score of 7-0 is a runaway victory for the German. Nevertheless, on the last lap of the season a Verdi-dominant first half to this concert was secured. Xian Zhang pounced straightaway with a stealthy and exciting Overture to The Force of Destiny (real back-of-the-net stuff), edgily lyrical if just a bit too lachrymose, albeit recognisably Italianate. Then the trump card was played, Joseph Calleja (Maltese flags waved) introduced as an on-loan striker who you would want in your team every week. He spearheaded the attack, scoring with some classic arias, vividly communicative without force or strain, ardent and inviting in all he did, pretty good at drama, declamation and deep feeling, too. Not so convincing in ‘La donna è mobile’ though, all a bit smiley, lacking other tenors’ command of the Duke’s cynical seduction technique, and although Calleja (who has been favourably likened to Mario Lanza) is to be congratulated for avoiding showmanship by not holding-on-long to notes, or making them higher, or adding in twiddly bits, one came away feeling that variety of characterisation is not his strongest suit.

The reception for him was ecstatic, but no encore was forthcoming; and irritating that he had to walk off after every aria only to return a few seconds later (to accommodate Radio 3 intros no doubt). Throughout Calleja’s set Verdi’s eponymous Orchestra (he spent many years in Milan) and its music director offered finely drawn support but were hit and miss elsewhere. The Prelude to La traviata wore enough greasepaint to suggest Violetta as an already tragic figure; and if the playing remained full of flavour a whistle for offside should have been blown for a crassly truncated and earthbound Aida ‘Triumphal March’, the inclusion of authentic-looking and gleaming-sounding trumpets failing to stir the spirits. 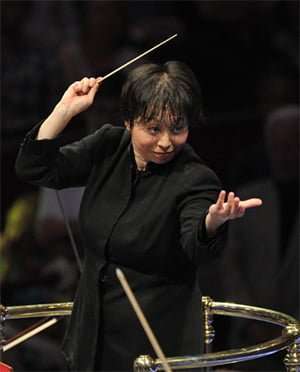 This year’s Proms term has featured a Tchaikovsky Symphony cycle: only right and proper that the masterly Manfred should be included (it mostly isn’t). Written between those numbered as 4 and 5, Tchaikovsky turned to Byron for inspiration. The result is one of his greatest works and some of his most sophisticated scoring.

Orchestra Sinfonica di Milano Giuseppe Verdi is certainly a vibrant outfit, although cymbal clashes and bass drum strokes sometimes went beyond crude (the tam-tam quite the opposite though!); even so this performance lacked the last degree of weight and dramatic punch, and Xian Zhang’s conducting – sometimes efficient, sometimes malleable, sometimes stimulating – tended to highlight the horns to distraction and left the quicksilver scherzo just a little laboured, not disguising that the off-the-beat rhythms are tricky to negotiate (Alpine fairy, rainbow and waterfall not made pictorial enough). Manfred’s torments as he wonders the Alps were lacking that last degree of personality, although Astarte’s theme (Manfred’s heart-gnawing lost love) was beguilingly shaped. If, as a plus-point, this was a complete performance which respected Tchaikovsky’s intentions (Manfred has had numerous abuse and indignities heaped upon it over the years), somehow it missed being the epic panorama it can (should) be, although the pastoral slow movement was leisurely and eloquent. If the finale wasn’t the wildest of orgies, the introduction of the Royal Albert Hall organ (ironically the programme credited Eugenio Maria Fagiani as playing the composer’s requested harmonium), while on the Gothic side, cleared the way for a transcendental coda, tenderly and movingly played that stirred the soul in its quiet acceptance.

The encore was cleverly chosen; we stayed in Switzerland and returned to Italy – the final section of Rossini’s Overture to William Tell, given a dashing and dynamic outing. The Lone Ranger rides again!