“Waltz through a glittering ball, enter a feverish dream, march to your own execution, and spin into dark delirium at a witches’ sabbath. Take on the opium-infused visions of a tortured artist haunted by unrequited passion.” [BBC Proms website] 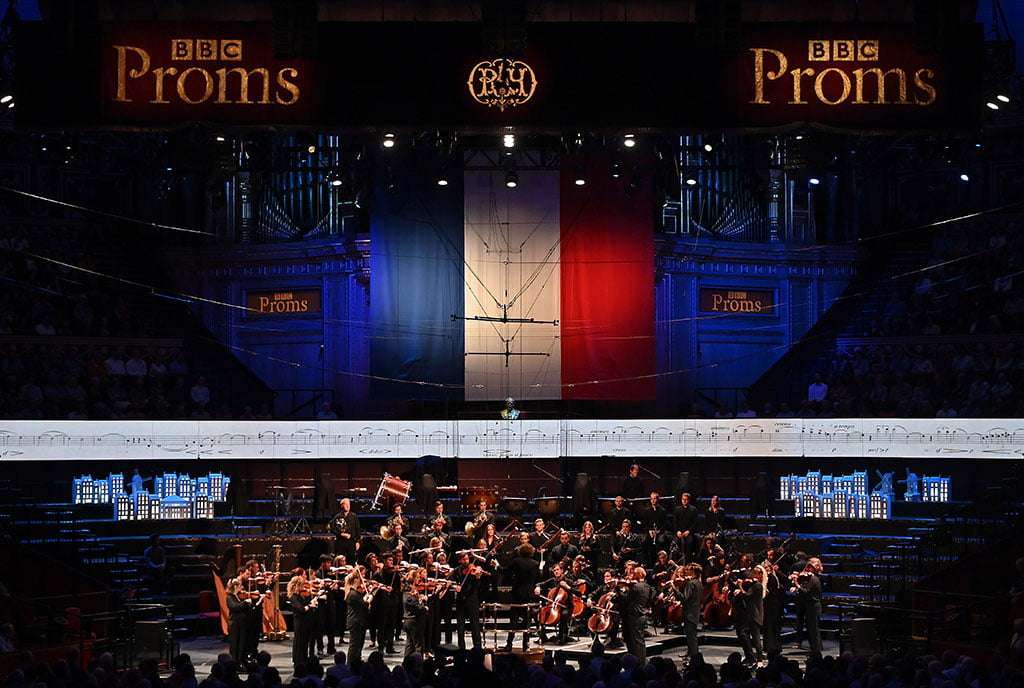 When did you last see a symphony orchestra playing from memory and wearing sinister masks? This specially devised and family-friendly presentation vividly brought to life Berlioz’s ground-breaking Symphonie fantastique. Its preliminary ‘Ant & Dec’-style preamble, shared between Nicholas Collon and Mathew Baynton, outlined in the composer’s own words the stimulus behind the work, accompanied by Iain Farrington’s arrangement of Berlioz’s La belle voyageuse. In addition, the musicians demonstrated the transformative progress of the Symphony’s idée fixe across its five movements. During this twenty-minute ‘chat show’ introduction a banner displaying this recurring motif stretched across the rear of the stage which then began to fill with an assortment of light-filled shoeboxes (apartments and windmills) intended to evoke Parisian night-life in the 1820s. From the organ console there hung the French tricolour.

As a visual enhancement of the Symphony’s autobiographical element, this staging brought striking intensity to its emotional and dramatic power. A glitterball at the end of the waltz second movement transformed the Royal Albert Hall to an episode of ‘Strictly’, two military side-drums on either side of the stage brought us slightly closer to Berlioz’s fevered imagination in the ‘March to the Scaffold’, yet it was the sight of multiple masks (somewhere between goats heads and sheep skulls) for the ‘Witches’ Sabbath’ that made a lasting impression. 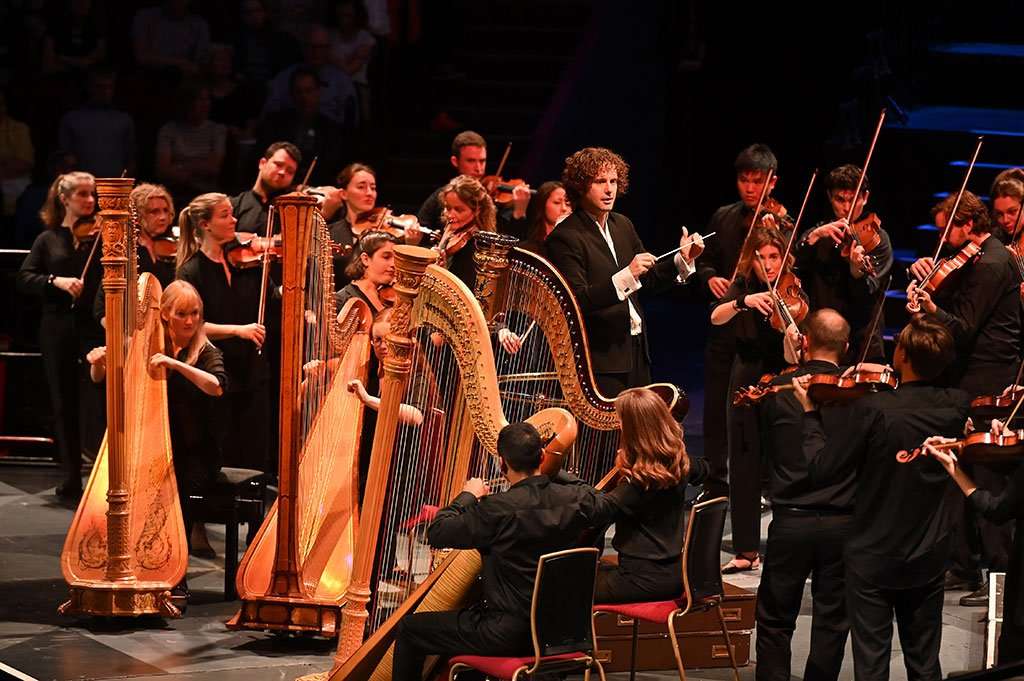 While the razzmatazz made its own conspicuous impact, the performance was riveting throughout, with Collon drawing playing of cinematic intensity. The hallucinations of the first-movement’s ‘Réveries’ were nicely caught with accents and dynamics scrupulously observed; the latter occasionally savagely rendered in ‘Passions’ (timpani erupting from the texture) or disappearing from view but building to a compelling climax.

A break between each movement to allow for stage changes drew from Baynton a brief discourse for “thoughts on harps” as four of them (rather than the usual two) were placed at the front of the stage for a very stylish ball scene, augmented by the ad libcornet.

Of greater visual impact was the darkening of the stage for ‘Scène aux champs’, the orchestra gradually spot-lit from within with its companionable shepherds movingly conveyed by Patrick Flanagan’s cor anglais and John Roberts’s oboe, their individual and collective musicianship outstanding. Menacing horns initiated a fast-paced ‘March to the Scaffold’ (with four bassoons up front encircling the podium) where the brass brayed for blood.

For the Witches’ movement gaudy red lights fielded the stage and were capped with a red moon. As if playing from memory wasn’t enough the violin section had choreography, the players turning on given cues to face the audience, their masks suddenly more-disturbing. Off-stage bells added to the clamour as did shrieking clarinets, flatulent brass and demonic strings.

This was an account in which phantasmagoria was fully realised, Berlioz’s visions brilliantly conveyed; a wonderful spectacle.