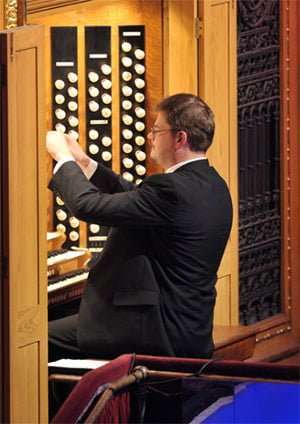 Klaus Sonnleitner is the latest successor to Anton Bruckner as organist at the monastery of St Florian (in Linz, Austria). And Bruckner once gave several recitals on the Royal Albert Hall organ. Bruckner greatly admired J. S. Bach’s music, so it was apt that some of the latter’s pieces for the instrument should share this penultimate Prom of the season with Bruckner’s monumental Eighth Symphony.

Sonnleitner produced some of the best timbre and volume heard from the mighty in-house organ during the last several weeks (on a par with Richard Hills, and only him). Opening with the familiar (instrumental) ‘Sinfonia’ from Cantata 29, Sonnleitner was slightly foursquare with the French accentuation as arranged by Alexandre Guilmant but appropriately regal and rock-like. The close harmony of BWV662 proved to be a Sunday-morning benediction that inveigled itself into one’s consciousness only to be martially contrasted by BWV667. The oboe-like stop used for BWV668 made it curiously confidential, and the Prelude and Fugue was respectively swirling (guttural and piercing sounds to the fore) and jubilant, recessing for a while before coming into the fullest bloom. For an encore, Sonnleitner offered another Chorale Prelude, ‘In dir ist Freude’ (BWV615), of musical-box charm.

Lorin Maazel has recorded one of the greatest-ever library-versions of Bruckner 8, for EMI with the Berlin Philharmonic, and there is a more-recent taping with the Bavarian Radio Symphony Orchestra. Like the majority of conductors these days he favours Leopold Nowak’s edition of the 1890 score, which is fine, but for anyone who got to know the work in Robert Haas’s publication, which includes passages from the 1887 original, then the cut that Bruckner may have wanted (or been persuaded to wanting) in the slow movement, and which Nowak sanctions, remains a jarring moment. That aside, Maazel and the Vienna Philharmonic Orchestra gave us a magnificent performance, huge in its timescale, resplendent in sound, and compelling at every turn. 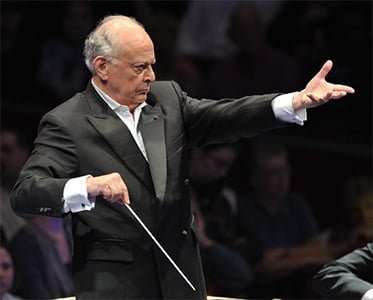 The occasional fallibility aside, this was a burnished and intense traversal ignited by Maazel’s magnetic personality and through the Vienna Philharmonic’s innate way with this music. Maazel should not be thought predictable in this work; his Berlin recording now fits a single disc; his Bavarian version does not; this Proms performance lasted for a rounded 90 minutes that in turn knocked several minutes off a reading he gave with the LSO in November 2004. Yet timings are mere statistics (if not damn lies) and give no clue as to the ingredients of what happened on the night. So with the Vienna Philharmonic we had a first movement that leant more to Bruckner’s moderato than to his allegro, but it was generously laid out and gloriously brassy and the coda’s disillusionment was chilling. And if the scherzo was short on locomotion it certainly didn’t lack for trenchancy, with some pastel-shaded pianissimos tickling the ears; the trio emerged as a country dance with moments of reverie: ah, if only we’d had the third harp that Bruckner so politely asks for, it’s a single part, then these instruments’ arabesques would have been a little fuller in sonority. (It’s rare that you see a music-stand in front of Maazel; typically he was without a score, but in its place he was grateful for the bottle of water and a glass just within reach for some refreshment.)

With the Adagio – the Holy Grail of slow movements – Maazel took the broadest of tempos (but slightly less so than with the LSO and with greater indivisibility, suggests the memory, if still flexible and sustaining 29 wondrous minutes); the result was something special in its beatific calm but with an agony-and-ecstasy ‘pull’ that took the music inevitably towards the cymbal-capped climax, after which something spellbinding happened and altered perceptions of time and space (well, mine); only the growly Wagner tubas seemed to belong to Planet Earth. As for the finale, which can seem discontinuous, it opened imposingly and distilled the noblest of ideals, about building something immortal, all leading to the monumental knot-tying coda, which was as uplifting as it was humbling.

A concert under the BBC Proms umbrella can be a magical occasion, great music and great performers seducing the audience to come-together and actively listen and then leaving the Royal Albert Hall elevated and enlightened. This was one of those instances.