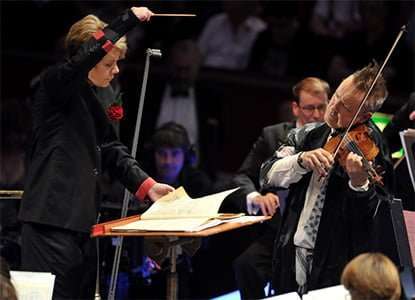 One of the trickier tasks a musician has to master is starting a performance. The traditional overture, concerto, symphony programme offers instrumentalists, and sometimes conductors, a formula that puts the easiest piece at the start, though there are some fiendishly difficult overtures! A concert with twenty-one items, as there was for this Last Night of the Proms, is going to tax even the best-prepared ensemble, and adequate rehearsal time needs to be given to ensure that the music is not being seen for the first time in the concert itself. While this was not the case here, there were a number of places where the choir, orchestra, or both seemed ill-prepared.

The Last Night usually includes a premiere – in 2012 we had Mark Simpson’s energetic Sparks, This time Anna Clyne’s Masquerade, which draws its inspiration from mid-18th-century promenade concerts held in London’s pleasure gardens. A whirlwind of notes opens this five-minute piece – evocative of the celebration and hubbub surrounding the masquerade of the title. Overtly tonal, with hints of popular music (Clyne has worked with a wide variety of artists including Björk), Masquerade is disappointingly dull, yet Clyne’s understanding of orchestral colour is magnificent.

One of the celebrated composers this year is Wagner. The Prelude to The Mastersingers of Nuremberg had none of its vitality and warmth lost in this well-balanced performance. The intricate viola countermelody (so often underdone) that is heard below the first appearance of the love motif was here played with aplomb without belying the required tenderness. This would have been a suitable start to the concert. 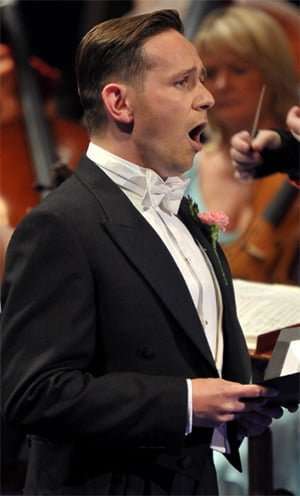 Chichester Psalms was written for the 1965 Southern Cathedrals Festival (at Chichester that year) and contains some of the most difficult choral writing ever. With words entirely in Hebrew, frequently shifting time-signatures and a huge range for the tenors, this is music that requires careful preparation. A suitably declamatory opening with fortissimo brass and chorus led smoothly into the dancing 7/4 ‘Psalm 100 (Make a joyful noise unto the Lord)’. Sadly the solo vocal quartet in the first movement coda was augmented to a chamber group, losing the quality of individual voices. Leonard Bernstein noted in the score that “the soprano and alto parts are written with boys’ voices in mind. It is possible, though not preferable, to substitute women’s voices … the long male-alto solo in the second movement must not be sung by a woman, but either by a boy or a counter-tenor”. Curiously, the first performance (in New York City in fact, July 1965) was given by a mixed chorus; however performances tend to always follow the composer’s instruction for a male solo.

Countertenor Iestyn Davies gave poise and elegance to the words of ‘Psalm 23 (The Lord is my shepherd)’; however the innocence of a boy treble was missed. The sudden and contrasting ‘Psalm 2’, as the tenors and bases exalt “Why do the nations rage?”, was all but lost here. The explosive Hebrew consonants that are so important (Bernstein includes a detailed pronunciation guide in the score) were nowhere to be heard. The prelude that opens the third movement – luscious and sustained – showed the BBCSO strings at their best. Chromatic chords lead exhaustingly to the emotional climax and the harps begin a comforting ostinato to underpin Bernstein’s supine melody to words of Psalm 131, “Lord, Lord, my heart is not haughty, nor mine eyes lofty”. Here tenors and basses in unison were superb though I would have liked more from the harps. A chamber choir once again detrimentally replaced the solo quartet in this sublime corner of the work which also felt rushed and was shown to be very difficult to sing in tune, although the a cappella coda made the hair stand on the back of the neck.

However he is perceived, Nigel Kennedy has earned rock-star status in the world of classical music. Dressed like a busker on Hungerford Bridge, fist-bumping members of the cello section, he played like an angel, and there is the paradox: why, at 56 years of age, does he need to be “down with the kids”? His enthusiasm for music knows no bounds though. The opening of Vaughan Williams’s The Lark Ascending was sublime, ringing out every drop of emotion. Throughout, his tone dominated rather than floated above the orchestra – every note clear and precise, but a wispy unfocussed sound at times would have been preferable. 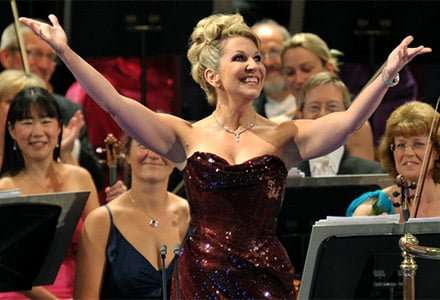 One of the lesser-heard of Britten’s pieces, his celebration for the opening of the Maltings at Snape in 1967 was for choir and orchestra, The Building of the House. With English words, the BBC Symphony Chorus was back on home territory in a rousing performance clear in diction and sensitive in musicality. The BBCSO was less sure about the myriad of cues given by Marin Alsop and led to half-hearted entries and a confused opening.

Joyce DiDonato then wowed the audience, first with her wardrobe (she wore three outfits altogether) and then with her confident rendition of Massenet’s ‘Je suis gris! Je suis ivre!’ (I am besotted! I am drunk!). To follow, a rather less successful outing for ‘Ombra mai fù’ (given with its recitative introduction) that sounded too big and brash. The strings, one desk removed from the back of each section, could really have had another subtracted with little ill-effect. To conclude DiDonato’s set (and the first half) one of her party pieces from Rossini’s La donna del lago. DiDonato’s distinctive vibrato was a distraction at the start; however her vocal gymnastics were quite something. She was enjoying herself; so were we.

The second half opened with a polished sequence from Bernstein’s Candide – the Overture, full of life and expectant if naïve hope and then the fabulous ‘Make Our Garden Grow’ – an anthem to common sense. The controlled crescendo that built to the a cappella climax showed Bernstein and the musicians at their best. With the Chorus warmed up came the Hebrew Slaves from Verdi’s Nabucco, the performers hanging onto every beat of Alsop’s baton as she kept control of the dynamic markings. Then back to music from the movies (we seem to have had quite a bit this year). Joyce DiDonato appeared in another dress (silver and sparkly) to sing Harold Arlen’s ‘Over the Rainbow’ from The Wizard of Oz. While not the clearest of diction here – sometimes English needs to be sung simply – it was wonderful to hear the solo voice given without amplification. Whether this was an arrangement or Harold Arlen’s own orchestration we were not told; however the score is one of the finest of the Hollywood classics. 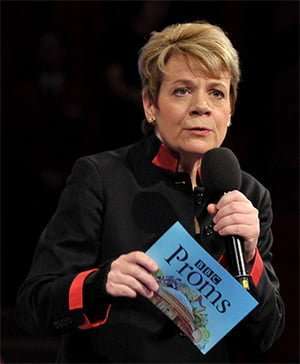 Nigel Kennedy returned (having played across the road in Hyde Park moments earlier, one of several “Proms in the Park” events, in Belfast, Glasgow and Caerphilly, London’s line-up included Bryan Ferry, Terry Wogan and Dame Edna Everage). Sporting his beloved Aston Villa shirt (Agbonlahor’s name on the back), it seemed that Kennedy was sent back to make Marin Alsop’s life difficult. His ultra-improvisatory performance of Csárdás by possibly the original Gypsy King, Vittorio Monti, included quotes from The Four Seasons and Beethoven’s Fifth, among others, which Alsop appeared surprised by. Balloons were popped and Kennedy traded improvisatory solos with BBCSO leader Stephen Bryant in a fun-packed performance.

Chris Hazell’s arrangement of ‘Londonderry Air’ is quite different from that heard at Proms in recent years, incorporating a jaunty shanty-like tune ‘The Merry Blacksmith’, which Hazell says “was ideal, as it was a happy tune and could be woven into Danny Boy”. A more substantial and quite beautiful arrangement, Joyce DiDonato sung it for us. Richard Rodgers’s ‘You’ll never walk alone’ has a place in the hearts of Liverpool FC supporters and it is becoming a regular at the Proms too. The audience was invited to sing from the start, which was a pity as we should have heard DiDonato take the first verse and then have everyone repeat … but we all got to sing a great tune twice.

There then followed different sea-songs, starting with Granville Bantock’s The Sea Reivers – tricky rhythms, well performed; followed by George Lloyd’s HMS Trinidad March with chirping woodwinds and bobbing promenaders. And then came a well-decorated ‘Rule, Britannia!’ in the orchestration by Malcolm Sargent. Now on the home straight, the final standards without which there would no doubt be a riot opened with a hearty rendition of Pomp and Circumstance, taken at a fair pace and led nicely into Marin Alsop’s speech. She confirmed 57 sold-out performances. (Hurrah!) £82,500 earned for musical charities (Double Hurrah!) Alsop then commented that she is the first female to conduct the Last Night (more than well publicised), but other women conductors had preceded her this season, such as Sian Edwards and Xian Zhang, and indeed Marin herself (Prom 47), and JoAnn Falletta last year: Alsop was shocked that in 2013 there are still firsts for women. Then a plea that music and art cannot be pushed to the margins – I fear that Alsop is preaching to the converted as music-services teaching in British schools has all but disappeared.

To end, the audience was on its collective feet in a rousing and emotional finale to the 2013 season of BBC Proms – Hubert Parry’s Jerusalem as orchestrated by Elgar, Britten’s hushed arrangement of the National Anthem and a final chorus of ‘Auld Lang Syne’.