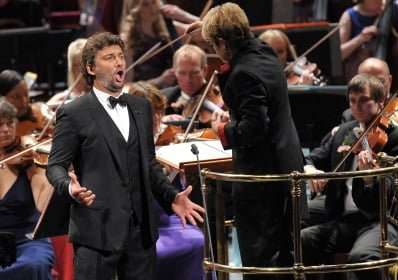 Dedicated to a “just, moderate and peaceful society” – as per Marin Alsop’s second-half speech – the Last Night of the Proms 2015 accentuated a transatlantic flavour that included music by American composers James P. Johnson, George Gershwin and Morton Gould, as well as a BBC commission to start the concert, by Jamaican-born Eleanor Alberga.

Alberga’s three-minute piece is largely tonal and in a soundworld that is more than familiar (‘Daybreak’ from Ravel’s Daphnis et Chloé springs to mind), the full forces of the BBC Symphony Orchestra and the choruses were used to good effect. Bubbling woodwinds awaken the world before the music becomes more agitated as “humanity calls on Athena to bring wisdom and music to the world.” A brief dally into atonality ensues before quickly returning to the diatonic chromaticism of the start. Enjoyable enough, Arise, Athena! is probably too short and derivative to become an addition to the repertoire. 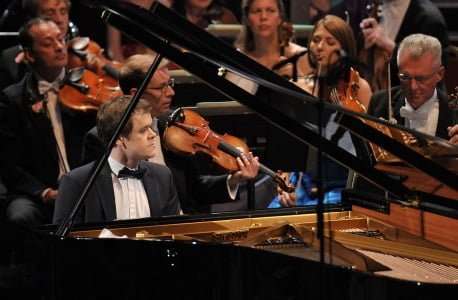 In the first of his appearances Benjamin Grosvenor’s thrilling account of Shostakovich’s Second Piano Concerto went a long way to explain why the 23-year-old is in such high demand. A sprightly first movement gave way to a more thoughtful second – delicately accompanied by the strings, with Grosvenor turning his head and listening intently as though he were playing chamber music. Sparkling and brilliant, Grosvenor saw off the finale with virtuosity to end an immaculate performance.

Arvo Pärt’s Credo was given its premiere in 1968 at a time when the Soviet ideologues were stamping down hard on challenges to their rule. Despite the composer’s protestations that the work had no political subtext, Credo was banned for over ten years. It mixes Baroque-style harmonies (largely based upon the C-major Prelude from Book I of J. S. Bach’s The Well-tempered Clavier, Elizabeth Burley at the piano) with choral and orchestral improvisations. Quite different from Pärt’s later oeuvre Credo is a compelling listen. A big ‘thumbs-up’ to the chorus at the end from Alsop said all that needed to be said – awesome! 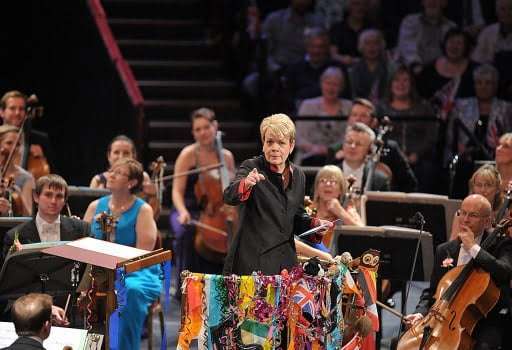 The only piece in the first half to show-off the BBCSO in all its finery, Richard Strauss’s Till Eulenspiegel’s Merry Pranks did not disappoint. Apart from an over-eager bass-clarinet, the orchestra didn’t put a foot wrong in a rendition that mixed poise with humour.

Before the interval Jonas Kaufmann offered some Puccini, but the three arias suffered from him being too far forward of Alsop, which meant, at times, that singer and orchestra parted company. Why the BBC did not think to include a camera and video monitor to transmit Alsop’s beat (as in the Sinatra Prom) is hard to fathom.

More than usual, visual stimulus was more of a feature in the second half. In this version for orchestra (arranger unnamed) of James P. Johnson’s Victory Stride, a cue from the small-band original was taken as instrumentalists, including the strings, stood to take solos, and brought Grosvenor back to the stage, not as soloist, but as one of the ensemble.

‘I bought me a cat’ from Aaron Copland’s Old American Songs was more a feat of technology than musicality as the RAH chorus and audience first greeted the four park venues before singing the first two verses. Next the BBC Concert Orchestra and the crowd in Hyde Park sang a verse, then, in turn, Swansea, Belfast and Glasgow – the latter, embracing regional differences, bought a “coo” rather than a “cow”. Finally we were back to the RAH – horse, pig, hen, goose, duck and cat all safely home. 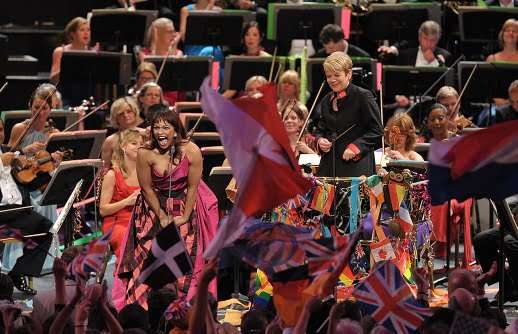 After the potential for everything to go horribly wrong was averted, it was a comparatively easy job for Grosvenor to play his Steinway. With the rest of the hall in darkness Grosvenor’s very personal portrayal of the Gershwin classic ‘Love walked in’, as arranged by Percy Grainger, gave the impression that he was playing for his own amusement. A skilfully accomplished performance of Morton Gould’s Boogie Woogie Etude followed.

Kaufmann’s return to sing Lehár’s ‘You are My Heart’s Delight’ (to give it its more familiar title) was a triumph. The audience, now in boisterous party mood, was not keen to settle, despite the calming influence of ‘Morning’ from Grieg’s music for Peer Gynt. Played well, the programming of this solitary movement seemed out of place. Perhaps ‘In the Hall of the Mountain King’, including the chorus part, would have been more suitable.

Fresh from Hyde Park, Danielle de Niese was playful and flirtatious in Delibes’s ‘Les filles de Cadix’; more demonstrative that Kaufmann, she did not suffer quite as much with ‘togetherness’ issues. 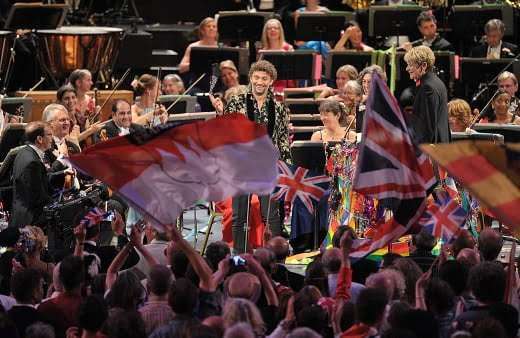 Music from the movies has proven popular in at the Proms, and to celebrate 50 years since The Sound of Music was released we were invited to a sing-along. The party in full swing, less attention than it deserved was given to Chris Hazell’s medley. The words were printed in the programme and included where the audience should sing and where not – some chose to sing everything. De Niese, taking the part of Maria, was having a ball.

The beginning of the end starts with Elgar’s Pomp and Circumstance March and, at the Proms at least, A. C. Benson’s words, “Land of Hope and Glory”. Alsop turned to conduct the audience as one massive choir. Making a welcome return to the Last Night were the hornpipe (‘Jack’s the Lad’) and ‘Home Sweet Home’ from Henry Wood’s here-truncated Fantasia on British Sea Songs. The BBCSO starting without Alsop’s lead and her mock indignation garnered laughter. Sweet as the name suggests, the oboe melody accompanied by the gentle humming of the audience added a moment of calm before Kaufmann’s return for Rule, Britannia!, who after being thrown a thong in the first half, he returned the compliment by throwing a pair of Union Jack briefs, to the enthusiastic crowd before him.

Prior to Jerusalem, Alsop gave a salute to the artists involved in the 2015 Season. A record amount has been raised for musical charities this year, which she announced was then standing at £107,000. At the 2013 Last Night, Alsop said that she was proud to be the first woman to conduct the event – this time she was proud to be the second first woman. More seriously, Alsop was keen to point out that equality for gender and race was a global problem that needs to be solved. Many share her belief that music might help but could never solve these struggles on its own.

Rounding off, we heard a rousing chorus of Hubert Parry’s Jerusalem to words by William Blake in the orchestration by Elgar, then Britten’s hauntingly beautiful arrangement of the UK National Anthem – and Cedric Thorpe Davie’s arrangement for chorus and orchestra of ‘Auld Lang Syne’, the appeal of the latter is that it used to be spontaneous. I don’t feel that it should be scripted and hope that next year it is once again left to the audience.