It’s not often that one is invited to listen to Dance of the Seven Veils immediately after the roof-raising conclusion of Alexander Nevsky. Of course, behind the drawn curtains of our living rooms, who knows what auditory juxtapositions we indulge in! But this was a public concert, a BBC Prom broadcast and televised to the world. It was never an obvious piece of musical union. And remains so! Timed at twelve minutes in the Proms Prospectus and programme-book, this Salome extract never lasts that long; a very slow striptease indeed. Andris Nelsons did stretch things though, teasing us, making the disrobing as sensual as possible, the lady completing the deed in 555 seconds. (Divide that by 60!) What can seem a tedious piece away from the opera itself, Nelsons and the CBSO secured an utterly compelling floorshow, percussively pointed, slinky, with tension heightened through warning chattering and eerie fluttering, and building to a fine old frenzy. Dating, Proms-style, it could just be that when we got to 10 o’clock, Salome the wily seductress, and soon to be the proud owner of a bloodied head, was tempting the disreputable Don Juan to a private showing. The Don himself (as portrayed in Nikolaus Lenau’s version of events) had launched the concert, a swashbuckling, freshly-observed account of a piece that was such a triumph for the 25-year-old Richard Strauss, and remains so. Launched here in propulsive style, the philanderer’s gung-ho travels and lingering-a-while (quite a while from Nelsons, persuasively so) were vividly characterised and musically poised. There was a real swagger and blaze to this performance and Rainer Gibbons offered a meltingly beautiful oboe solo. Following the Don’s demise in a swordfight, the closing bars’ charged silences and ghostly flickering was especially compelling. 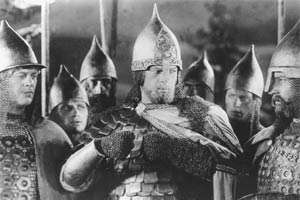 The year 1938 found Prokofiev writing music for Sergei Eisenstein’s film of Alexander Nevsky and Walton composing his Violin Concerto. Stalin had brought Eisenstein and Prokofiev together, the brief being a movie that would be seen as anti-Germany propaganda through documenting the 13th-century victory of Russian forces led by Nevsky over the invading Knights of the Teutonic Order. But in 1939, soon after the film‘s release, Stalin signed a non-aggression pact with Hitler and suppressed the footage, only to re-release it when Germany invaded Russia. The cantata that Prokofiev made from the film score is an ideal piece for the Proms and for the Royal Albert Hall. Nelsons played it up a treat, bringing its sections (describing tyranny, past triumphs, crusades, the people arising…) with graphic zeal, Prokofiev’s Technicolor use of the orchestra (the film is shot in grainy black-and-white) fully relished. What didn’t quite come off was the extended showpiece (and seminal) ‘Battle on the Ice’, which was just a little too deliberate in pacing to be fully engulfing. Also, despite the sterling and lusty efforts of the CBSO Chorus, a few more singers would have been welcome to really fill the RAH space as well as some attempt to approximate that dark-earth timbre of a native Russian choir in order to match the sung language. There was however real elation as Nevsky victoriously entered Pskov, yet it was Nadezhda Serdiuk’s fruity Slavic tones and heartfelt singing, representing the feelings of a young girl making a mournful examination of those felled in combat – very poignant, the RAH shrinking to intimacy – that lingers most in the memory.

And such confidences were also extended (in every sense) in William Walton’s Violin Concerto, a glorious piece by a great composer. Written for Jascha Heifetz, despite Walton’s best efforts to make it as technically challenging as possible for one of the supreme violinists, Heifetz made alterations to the solo part to take it to the level of fiendish. He recorded the work twice, the second time with Walton conducting, by which time (1950) he had revised the orchestration. Midori was at the polar extreme from Heifetz in interpretation. Where he is taut (some would say unfeeling), she, faithfully accompanied by Nelsons and the CBSO (with crisp detailing and with attention to Walton’s characteristic rhythms and ornaments), was expansive, threatening each of the three movements as being episodic; yet in spite of her small tone and restricted fortissimos – and, in the first movement, some wayward intonation and mechanical fallibilities – this became a really wonderful and involving performance, Midori’s privacy, passion and gutsy attack opening out the music’s bittersweet lyricism and volatility, stressing its Mediterranean wafting (born in Oldham he may have been, but Walton was thoroughly cosmopolitan in outlook) and scintillation. The second movement’s drive cut rapaciously through the air, and – introduced by a great horn solo (presumably from Peter Currie, listed principal Elspeth Dutch wasn’t playing in this work) – the middle section’s contrasting seduction (a feature of this concert!) was dusky and fragrant. Come the ultimate close, loose ends had been knotted together and the homecoming was dug into.