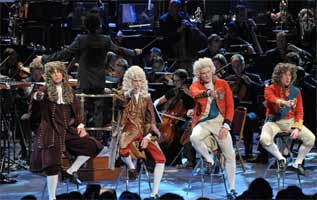 I had no idea what to expect from the latest BBC-branded Prom, morphing the free family Prom into a CBBC spectacular based on Horrible Histories. I’ve caught a couple of the television programmes, which – admittedly – left little impression, but I went with an open mind and was completely bowled over. Not only was this a ridiculously enjoyable but also impeccably presented romp through world and musical history, but may even have been a first in that the Prom featured a puppet, one Rattus Rattus, who has his own, jaundiced view of proceedings. Louise Fryer also helped with the links.

But how would the Aurora Orchestra be employed? Well, we started at the very beginning of time with the opening to Strauss’s Also sprach Zarathustra (Fryer not shying away from Nietzsche’s original inspiration, Zoroaster – though her reference to his ‘Superman’ might have taken the young members of the audience up the wrong track!), and that led directly into the fast-rhyming theme tune to Horrible Histories itself, a foreshadowing of the characters we were about to meet (gorgeous Georgians… vile Victorians… daring knights… awful Egyptians… vicious Vikings… Cavemen – savage, fierce and toothless – and mean and measly Middle Ages). 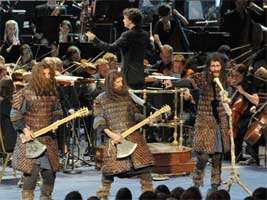 But first we had a rapid history of music from the Greeks to John Cage, including the Aurora Orchestra on serpents, shawms and sackbuts, ending with a presenter disco-dancing to Cage’s 4’33”. Amongst the sketches there was a lovely argument between Mozart and Beethoven about who was the greatest composer, and Death (in skeletally white face-mask and with sparkling scythe), continued the obviously-popular ‘Stupid Death’ series by interviewing Jean-Baptiste Lully who died from having stamped his toe with his conducting stick. The toe grew septic, developed gangrene and eventually killed him, much to Death’s amusement.

There were also the witty song-pastiches that the Horrible Histories team is well-known for. They are the work of Richie Webb and ideal for a Prom setting as the 21st-century equivalent of Gilbert & Sullivan. The four elaborately periwigged King Georges (Born to rule over you, Four! Three! One! And Two!) were a boy-band, there was a mournful solo ballad for Richard III, Henry VIII’s mnemonic as to how to remember who he’d been married to – with the massed children’s choirs doing the actions of Divorced, Beheaded, Died, Divorced, Beheaded, Survived, a fabulously rapping Charles II and then Cleopatra, a jazz elaboration of the many separate eras in what we, all-too-conveniently, entitle ‘Stone Age’ and, finally, a heavy-metal-band quartet of Vikings – the nihilistic style summing up the modus operandi of Scandinavia’s most successful export before Abba. 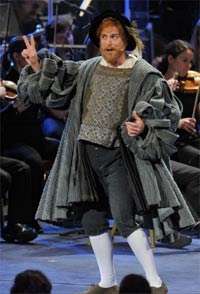 What’s extraordinary, amidst the scurrilous musical pastiches, is that the take on history was so good. Henry VIII’s contribution was far more historically correct than the recent TV series The Tudors (and far more succinct), while Richard III’s ballad tried to put the real case of the un-hunchbacked king against Tudor propaganda, as perpetrated by one William Shakespeare. There was also a lovely, That was The Frost Report-style sketch about Feudal society, with the peasants at the bottom of the pile, answering to the yeomen, who answer to the knights, who answer to the barons who answer to the king.

And then there was the music. There was a rather odd muddle of Saint-Saëns’s Danse macabre to introduce The Plague, Thomas Gould’s violin solo curiously lost amidst what was a poor and cut arrangement, but from then on things got much better, with ‘Tybalt’s Death’ from Romeo and Juliet (Prokofiev), Vaughan Williams’s arrangement of Greensleeves (introducing Henry VIII), Berlioz’s ‘March to the Scaffold’ (Fantastic Symphony), Handel’s Music for the Royal Fireworks, a Lully march, players in a processional led by Lully (before his interview with Death), the Overture to Mozart’s Marriage of Figaro, Mendelssohn’s ‘Wedding March’ (Midsummer Night’s Dream), the ‘Sacrificial Dance’ from The Rite of Spring and (not mentioned in the cartoon-filled, full-colour programme) Wagner’s ‘Ride of the Valkyries’ (Die Walküre) for the four Viking rockers to force their way through the Arena.

Hopefully there will be more Horrible Histories Proms for there are many more historical characters to be brought to the stage. This one was broadcast live on BBC Radio 3 and filmed for BBC1 and CBBC – a Horrible History hoot!