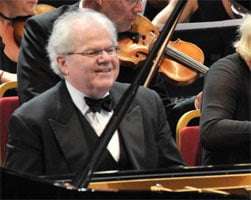 For Emanuel Ax, Brahms’s D minor example is the ‘Eroica’ of piano concertos. With Bernard Haitink undemonstratively conducting the Chamber Orchestra of Europe and Ax himself a model of tact, without losing largesse and character, if this account was neither titanic nor super-spacious, it was certainly alive to Brahms’s grand design and his depth of feeling, not least in the ‘religious’ slow movement, which was especially confiding of things beyond the powers of speech. The powerful outer movements were notable for integration and clarity, balances within the orchestra, and between players and pianist, being spot-on. Ax, as leonine as he was sensitive, and Haitink, as unobtrusive as he was attentive, aided and abetted by a collegiate COE, gave a flowing, expressive and contoured performance, two great musicians with nothing to prove and no need to brag about it. Ax offered an intimate encore, the opening number of Schumann’s Fantasiestücke (Opus 12), this particular ‘Des Abends’ being of gentle repose, the Royal Albert Hall shrinking to salon size. 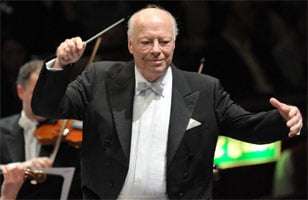 The Prom had started with Brahms’s Third Symphony. Haitink saw no reason to inflate the COE’s string size (here of forty personnel), but he does appreciate the importance in this music of antiphonal violins, the orchestra overall equating more or less (more in fact) to early performances of Brahms’s music at Meiningen; and, anyway, the COE is well-versed in revelatory Brahms thanks to Paavo Berglund’s great Ondine recording of the symphonies that is a model of transparent textures and the best sort of ‘insider dealing’; Brahms no longer portrayed as bearded and portly. It was similar with Haitink; winds and strings in contrapuntal equality, the contrabassoon a distinct presence. The first movement, arguably too docile, autumn coming early, although gathering strength with the exposition repeat, was nevertheless lofty and with exemplary dynamic contrasts. The finale had more purpose and, following the ‘storm and stress’ climax, it was wound-down with passion-spent satisfaction. Best of all were the middle movements; without the suggestion of being micro-managed (Haitink’s is the art that conceals art), they were expressively flowing, poised and subtly shaded; most remarkably a through-line was maintained while remaining faithful to episodes and their contrasts, exquisitely turned.

This first of a pair of Ax/COE/Haitink Proms embracing Brahms’s two piano concertos (BBC Radio 3’s oft-heard trailer suggested he wrote more than this!) and two of his symphonies makes the day-following concert mandatory. The Symphony is No.4.