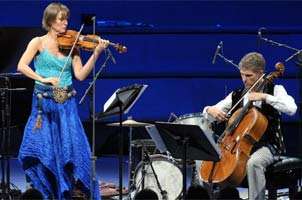 Following their successful world premiere of Thomas Larcher’s ‘Double Concerto’ in the earlier Prom, Viktoria Mullova and Matthew Barley returned to explore one of their other musical passions, in tandem with three highly-respected jazz musicians. The basis of this late-night concert, given under atmospheric blue lighting, was the pair’s new release on Onyx, The Peasant Girl, Mullova in a striking blue outfit. The Gypsy music chosen began in France – an effective pastiche from the group Bratsch (nothing to do with violas!), which got us off to a punchy start with swift solos from Mullova and Barley in unison, and then pianist Julian Joseph, who has mastered the knack of appearing to have all the time in the world to deliver his music, no matter how difficult. Sure-footed rhythmic support came from the marimba and vibraphone of Sam Walton and the dextrous drumming of Paul Clarvis, the quintet taming the Royal Albert Hall acoustic with impressive ease. The slower Django, a tribute to the guitarist Django Reinhardt, found Joseph in more languid mood.

That Kodály’s Duo did not feel like an imposition in this company says much about its composer’s vision. For a piece written in 1914 there are some extremely daring passages of war-torn strife within, which Mullova especially captured in the slow movement. The more athletic Hungarian Gypsy themes were thrown backwards and forwards between her and Barley, the quiet pizzicato passages just as intense, fragmented yet supportive to the big, passionate themes.

The other three players returned for a vibrant interpretation of Joe Zawinul’s Pursuit of the Woman with the Feathered Hat, written in 1978 for his jazz-fusion outfit Weather Report. Sam Walton was the lynchpin here, making light of a difficult marimba ostinato, while Joseph’s piano solo was crunchy and chromatic. A second Weather Report piece, The Peasant, was more tightly wrapped, the enclosed melodic loop becoming mesmeric from Mullova before a lightly humorous pizzicato finish. This had segued-in from Barley’s own Yura, a soft poem on Lake Baikal of Siberia, simple in its glassy clarity but touching in the inclusion of a Russian Gypsy song, dedicated to Mullova’s recently late father. The quintet finished in another continent, Africa, loosely transcribing a piece for two ouds into their own format but keeping the strongly persuasive seven-in-a-bar rhythms, increasingly fractured as they reached a rousing conclusion. As an encore was Florian Hermann’s Oci Ciornie, the musicians warmed to their task, the enjoyment of the music completely in evidence.