The forceful pizzicato chords which launch Britten’s remarkable set of Variations on a Theme by his teacher and mentor Frank Bridge were decidedly underwhelming, and heralded a performance which, for all its moments of felicitous playing, simply failed to register fully in the Royal Albert Hall’s generous acoustic. Whilst the City of London Sinfonia’s personnel were probably around the same size as that deployed by Boyd Neel (who commissioned the work) and his string orchestra – if not slightly larger – detail and projection were inevitably lacking on this occasion. To be sure, there was some wistful playing in the ‘Romance’, and cellos were most eloquent here and elsewhere (especially in the initial Theme), but the more animated passages were effortful, and the lack of weight was constantly apparent, most notably in the ‘Funeral March’. 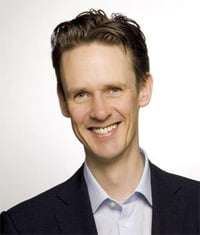 The composition of No Man’s Land was prompted by the late Richard Hickox, who asked Colin Matthews to provide a work for the City of London Sinfonia’s 40th-anniversary. The conductor’s death three days after approaching Matthews determined that the piece be dedicated to Hickox’s memory.Poet Christopher Reid provided a sequence of verses taking the form of a dialogue between the ghosts of two soldiers from the First World War whose bodies are left hanging on barbed wire in no-man’s-land. Such a scenario, with vocal parts for tenor and baritone soloists, inevitably brings to mind Britten’s Wilfred Owen settings in his War Requiem, and, indeed, the orchestral sonorities deployed by Colin Matthews seemed reminiscent of later Britten – and of Owen Wingrave in particular. In addition to Reid’s text, there are pre-recorded interpolations of marches and a song from the First World War period. The baritone – here the characterful Roderick Williams – has some passages in the style of ‘pub’ songs, whilst Ian Bostridge had episodes in a more anguished, if not expressionistic, style.

The whole was quite compelling, and it is certainly a work which would repay repeated listening. The performance seemed very assured, and the composer could hardly have had more committed advocates in Bostridge and Williams, with Stephen Layton and the CLS providing atmospheric and delineated accompaniment.

The word which sprang to mind to describe this performance of Mozart’s Requiem was “urgency”. There was very little let-up in terms of forceful choral delivery and an almost operatic feel to the whole. Indeed, after a while, one wished for some ease in the tension and a lessening of the relentless approach to tempos. Emma Bell deployed her generous and vibrato-laden tone in such a manner as if to suggest Verdi’s – rather than Mozart’s – Requiem whilst the team of soloists in ensemble made a somewhat anonymous impression. Baritone Henk Neven, replacing bass James Rutherford, lacked the resonant qualities at the bottom of his range in the ‘Tuba Mirum’. On its own terms, however, this performance was compelling, but there was little sense of repose in this fiery, dramatic reading.