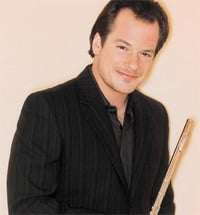 This was Emmanuel Pahud’s second visit to BBC Proms this year, following on from concerto performances of music by Elliott Carter and Marc-André Dalbavie. This recital’s theme was the 1940s, three works for flute and piano completed in that decade. It was a flying visit, for due to a rescheduled concert Pahud was required back in his role as principal flute of Berliner Philharmoniker that evening!

Pahud and Eric Le Sage began with Bohuslav Martinů, whose attractive Flute Sonata of 1945 is of a sunny disposition, indicative of a composer enjoying his summer holiday in Cape Cod. The colourful, blues-inflected harmony of Le Sage’s introduction sat well with Pahud’s long-breathed legato and chirpy staccato passages. The sweetly reflective slower theme in the first movement was a delight, as was the finale, which finds the composer evoking the whip-poor-will, a bird whose incessant song dominated his thoughts while writing the piece. Here it was persistent yet charming, Pahud’s bright tone ideal for the closing flourish.

In a brief chat with BBC Radio 3 presenter Catherine Bott, Pahud expressed the wish that Henri Dutilleux might complete a Flute Concerto “before the age of 150” (the composer is now 95). The seemingly age-less Dutilleux did however write a Sonatine for flute in 1943, a piece he has recently described with characteristic modesty as “conservative”. An exam piece for the Paris Conservatoire, the colourful work makes demands on a variety of playing techniques, which Pahud had mastered thoroughly. There was beautiful control on the final note of the first movement as it faded away, some quick-fire flutter-tonguing in the staccato figuration of the third movement and a wide range of colour, often rich, in the Andante. Le Sage, too, was not without challenges of his and the incisiveness he applied to the faster music gave it real cut and thrust.

Thanks largely to David Oistrakh’s endeavours, Prokofiev’s Flute Sonata is now better known as the composer’s Second Violin Sonata (Opus 94a). It was therefore a pleasure to hear Pahud returning it to its original state in a performance of great vigour and panache. The duo chose daringly fast tempos at times, but the music still had room to breathe, its wry humour and sudden bursts of lyricism alternating beautifully. The Andante found Pahud exploring the expressive qualities of the flute’s lower range, while the second theme of the first movement, with its composer’s characteristic ‘wrong notes’, was endearingly bittersweet. Capping off the performance was the quick-step of the finale, spiced up Le Sage as the coda beckoned, the pair enjoying Prokofiev’s balletic sleights of hand. As a generous encore was a florid account of Fauré’s Fantaisie (Opus 79) to complete a wonderful recital in warmly expressive style.