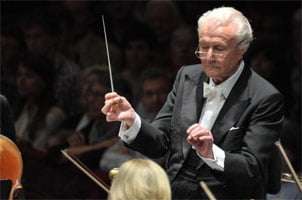 The audience and the members of the Gustav Mahler Jugendorchester gave a very warm welcome to Sir Colin Davis at the start of this Prom who, although these days conducting sitting down, still has more bite and energy in his baton than a great many of his younger colleagues. The warmth and rapport between this young orchestra and the youngest of senior conductors was apparent from the explosive opening flourish of the Stravinsky – incisive, cutting and thrilling all at the same time. A momentary lapse of concentration followed and ensemble came noticeably adrift and was unsettling for a while; maybe the back-desks couldn’t see Davis’s baton as clearly as they needed to in music that it only takes a split-second to lose footing – but when togetherness was recovered the first movement progressed to a pretty shattering climax. The following Andante was finely balanced, the flute(s) and harp serene and elegant paving the way for a particularly successful finale – perhaps the stark, peculiar duet for trombone and piano was a little tentative, but the final positive major-key chord couldn’t have been more secure or fulfilling. 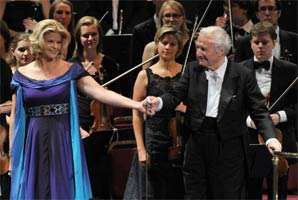 The combination of Susan Graham and Ravel’s Shéhérazade is a match made in heaven, not least for her impeccable French, elegant phrasing and superb breath-control. The wonderful atmosphere created by the performers at the end of the first song, ‘Asie’, was shattered by the usual and in this case particularly fervent bronchial racket. What is the need for this? Irrespective of the length people have had to wait, the result if always the same! I suppose one should be grateful that on this occasion it didn’t come during the music…! ‘La flûte enchantée’ was seductive and languorous, the solo flautist providing richness of tone, particularly in the low register. The final setting of Tristan Klingsor (really Léon Leclère), ‘L’indifférent’, sets the strangest poem – an odd take on the myth of Adonis, but musically it is perhaps the most sensual of all. The placing of the chord around and Graham’s delivery of the one word “Entre!” – well, one would have to have a heart of stone not to be stunned! 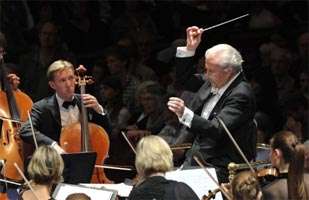 Tchaikovsky isn’t perhaps a composer one immediately associates with Colin Davis, but there can’t be any doubt that he has the measure of perhaps the most-hysterical of all this Russian’s symphonies and for the most part succeeded in making it less so. The first movement had a fine natural shape after the blood-curdling opening and the second subject a charming folk-like lilt, but one or two members of the violin section lost their way as we surged to the big climax. The wind soloists (in particular principal clarinet and bassoon, stars in the making) led a beautifully-judged second movement whilst the conductor got a well-deserved rest in the scherzo, leaving the strings to themselves in the pizzicato sections and they were certainly in control, quite an achievement considering the forces and the distance from one side of the platform to the other. The bubbling good-will of this movement relaxed some in the audience for they jumped when the orchestra unleashed the torrent of scales that begin the finale – as convincing an account as is likely to be heard. The response of the audience was (rightly) ecstatic. Sir Colin saved one of his lowest bows for the orchestra, offered his arm to the Leader, Diana Tishchenko, and left the stage with her – a gallant gesture that touchingly summed-up the evening.

Finally, quote of the week, maybe the season, from the “Proms Plus Family” section of the programme – “He (Tchaikovsky) encountered two women who changed his life – which is surprising because generally Tchaikovsky thought women were YUCK!”. Clearly, with drivel like this, we need have no worry about the social or musical education of our children!