Havergal Brian
Symphony No.1 in D minor (The Gothic) 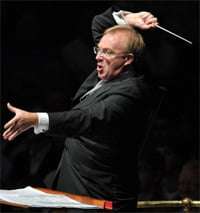 It is fair to say that far more people know about Havergal Brian’s Gothic Symphony (1919-27) than will ever have heard it. Long mythical in its inaccessibility, it was finally brought to life by Bryan Fairfax in 1961. Among the five subsequent complete performances, Sir Adrian Boult directed the first ostensibly professional hearing in 1966 (preserved on Testament), followed by Trevor Stokes in 1978 and Ole Schmidt in 1980. There matters rested until last December, John Curro giving the “non-UK premiere” in Brisbane, and now Martyn Brabbins has introduced the work to the BBC Proms in an account which, if not definitive (could one ever be thus?), had its measure like none before it.

Much has been written on this work as a musical event with few if any equals. Yet it is vital to bear in mind that Brian, already an experienced composer when he began the piece, was reckless only in his conception – ‘problems’ that are encountered in performance being mainly logistical and occasionally technical though never arising from the musical content. All credit to Brabbins for overseeing so intensive a preparation (both regionally and at Alexandra Palace prior to the dress rehearsal), such that precious little was left to chance on the night itself. Anything that went wrong therefore stemmed from failings which were relative rather than intrinsic.

And this was not a performance that played it safe. Not only did it proceed straight through as intended, but Brabbins inserted brief pauses only after the first and before the last of its six movements – enabling the work to be appreciated as a cumulatively unfolding entity whose tonal evolution is as oblique yet as purposeful as its emotional progression. As a representation of the Gothic era in all of its diversity and contradiction, Brian was hardly averse to admitting a few formal ‘curve-balls’, though these only serve to open-out the expressive scope of a piece whose inclusivity can only be appreciated in the original sense of that much misused word. 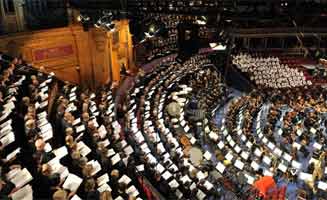 Insofar as timings are relevant, the performance was spot-on. In the first of the initial three purely orchestral movements, Brabbins, without under-emphasising the distinction between its incisive and languorous main themes (with eloquent playing from leader Lesley Hatfield in the latter), was at one with Brian in placing a premium on formal cohesion that was palpably secured during its later stages. Especially worthy was the simmering poise brought to this movement over its largely reflective reprise, thereby making the delayed return of its first theme the more visceral and the unleashing of its organ-capped coda the more resplendent. The Lento which follows is less a funeral march than a fantasia on funereal rhythms, something that Brabbins conveyed in a reading whose expressive eddying admitted of no false emotion. A quality that is applicable to the sombre tread of its outer sections as much as the brief yet unexpected timbral contrasts at its centre. Nor was the eventual peroration overly grandiloquent, for all that it might have been so given the organ’s much more audible presence than in previous accounts at the main theme’s heightened return. The coda featured horn-playing of melting purity and a bass clarinet transition the more arresting heard against a silent backdrop. From here the scherzo unfolded as the climactic entity it needs to be. Brabbins rightly kept the initial pages moving, not least the potent horn theme whose varied appearances are the movement’s formal backbone, so that the diverse alternations of mood and tempo during the first half generated the requisite momentum for the intuitive leaps to come. Whether in its initial explosions of power, xylophone-led gyrations that follow, or the martial climax with its breathtaking cadential resolution, the performance simply shone. The winding-down of intensity and serene close came as a benediction on what is, in itself, a symphonic entity with which to reckon. 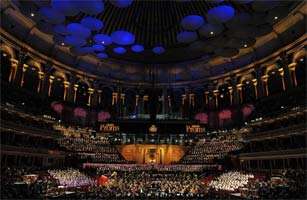 Various commentators have tried and only partially succeeded in explaining the physiognomy of the Te Deum setting that constitutes the work’s second half. Outwardly the most conventional of the last three movements, the first of them is also the most difficult to make cohere. Brabbins largely succeeded in forging its schematic alternation of praise and supplication into a cumulative sequence – one duly prefaced by the deftest of choral invocations and most impulsive of brass fanfares, then concluded by a declaration necessarily provisional in its sentiment. The result was a fourth movement in which expressive tension was at the very least maintained. Along with the scherzo, the setting of ‘Judex crederis esse venturus’ that constitutes the fifth movement is the work’s ostensible highlight. Brabbins rightly had the choirs take time over the intricate initial a cappella, with Susan Gritton’s solos a marvel of limpid clarity. The entry of the offstage brass and percussion, not quite quadraphonic in placing, yet made their baleful presence felt across the respectively granitic and tensile orchestral interludes into which the massed voices briefly intervene before propelling this most unequivocal of movements to its seismic close – thunder machine and bird-scares to the fore in what was a veritable mêlée.

Brian making the sixth movement the longest and the most diverse was a gamble that paid off handsomely in this performance. Peter Auty coped gainfully with his high-lying aria, while Alastair Miles gave a persuasive account of his more introspective solo. The choruses had the measure of music ranging from the densest tuttis to plainchant-like austerity (intonation aided, as earlier, by discreet organ underpinning). The nonchalant then celebratory sequence framed by jazzy clarinet march-pasts was unerringly handled, though Brabbins might have kept the frenzied double-peroration for massed brass and drums nearer the tempo of the choral double fugue (given with exquisite pathos), allowing their naked violence its head even more fully before a fragmented orchestral postlude. That said, the closing ‘Non confundar in aeternam’ was flawlessly rendered – its calm imploration imbued with a speech-like understatement which set the preceding 105 minutes in the most meaningful relief.

Otherwise, the sterling contributions of Christine Rice – denied a solo – to the vocal quartet, and David Goode in the wide-ranging organ part, must be mentioned. Orchestral failings were gratifyingly few, with the BBC National Orchestra of Wales and the BBC Concert Orchestra evincing unanimity as if they collaborated on a regular basis. Above all this was Brabbins’s performance, and the discreet but intent control exerted over the vast numbers (no voice or instrument spared) left no doubt he believed in the music from the inside and had absorbed it thus. That the capacity audience betrayed few signs of its presence says much for this conviction. Hopefully it will not be another thirty-one years before Gothic Symphony is heard in this venue again (previously Ole Schmidt). Such a work is, almost by definition, an occasional piece – albeit one that stands to offer much by being widely known and thought on. As flawed masterpieces go, no other risks so much in staking out the listener’s awareness of its greatness.