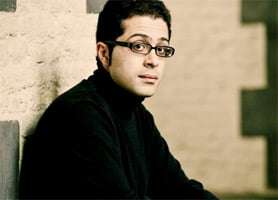 Proudly announced as a first for BBC Proms, Mahan Esfahani’s harpsichord recital at Cadogan Hall, the first of eight Proms Chamber Music concerts on a Monday lunchtime, contained a work whose duration is often far longer than the time allotted here. If all repeats are taken, J. S. Bach’s Goldberg Variations can last on average 70 minutes. In the event Esfahani, a former BBC New Generation Artist, clocked in at 48 minutes, eschewing most repeats.

Playing a double manual harpsichord loaned specially for the occasion by Trevor Pinnock, Esfahani chose as his manuscript the 1937 edition by Ralph Kirkpatrick. Throughout he gave a performance that was good to watch, his evident enjoyment of the music given extra expressive input either in the fast passages or when he wished to stress a particular line. Perhaps inevitably there were interpretative points to bear in mind. Some Variations stood out on account to Esfahani’s decision to take repeats, particularly in VII, where his turn of phrase with the witty, upward-pointing melodic figure was particularly adept. He also took repeats in II, IV and XIII. Towards the beginning of the set he also placed particular emphasis on the midpoints of each Variation, the arrival of a cadence often signposted with a notable holding back or sudden acceleration. This threatened to disrupt the flow of the music.

Much of Esfahani’s playing was admirable for its highlighting of contrapuntal lines, and he was also alive to the wit of the faster Variations – particularly in XIV and its almost-careless throwing around of the three-note figure. The plaintive nature of the slower sections was also highlighted, with IX nicely unhurried in this respect. The strangest music was heard in XXV, in which the use of dampeners on the upper manual (through the left hand) gave the melody and its accompaniment an oddly disjointed but unexpectedly emotional feel. This was all but destroyed – intentionally – by the flurry of notes that followed, Variation XXVI lighting the blue-touch paper.

Nor was Esfehani afraid to give the right-hand more room, a technique used to good effect in XIII, where the unusual harmonies were highlighted. Silence, too, was used as an expressive tool, becoming particularly important at the end of XV, where the gap left between the end of the high note and the low-register opening to XVI created its own profundity. These elements combined to make Esfahani’s performance interesting and often highly musical, with a use of ornamentation that was inventive and tasteful. Though the sense of occasion at the ‘Quodlibet’ was notable, it was unfortunate that Esfahani chose not to take repeats in the final statement of the ‘Aria’ (he had done so to launch the work) to give a greater sense of completion. Instead, as a postscript, Esfahani read a brief passage from the Epistles of Horace, written in 20 BC – a novel idea but a rather unnecessary addition.