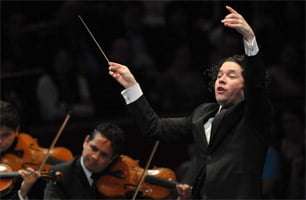 The Prommers’ queue outside seemed to stretch out to infinity, and to judge from the sense of occasion and anticipation from those inside the Royal Albert Hall, everyone was rooting for a performance of Mahler’s ‘Resurrection’ Symphony that would also stretch out to infinity – and beyond, if possible – which is what we almost got. If you wanted a testament to El Sistema’s programme of spiritual and social reclamation-through-music of Venezuela’s young (and now adult) people, this concert from its flagship orchestra (which has now dropped the ‘Youth’ component of its title) fitted the bill in style. With an orchestra of 170 (plus the 12-strong off-stage band), the quality of the playing – its freshness, maturity, clarity, attack and responsiveness – was thrilling, with any number of solos to make you go weak at the knees in admiration for the way these musicians were so inside Mahler’s soundworld, with playing so soft as to become almost a figment of aural imagination, and with the sell-out audience so quiet that a pin, let alone a mobile phone chirrup (save in the second movement), would have sounded like an explosion. And there was no inter-movement applause – so there is a god, whatever Mahler might have said on the matter. 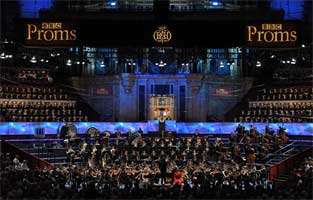 There was more than an element of micro-management in Gustavo Dudamel’s conducting that had not been apparent in his Barbican Hall concerts earlier this year; not surprising in an orchestra of this size. He took risks in the mighty first movement with some ensemble-threatening tempos. Mahler’s exaggerations are written into the score, and don’t need this sort of over-egging in excessive slowness, and extremes of dynamics and histrionic rubato, however useful it might be in displaying the orchestra’s virtuosity. The players handled all this detail superbly, especially the fourteen double basses, accumulating a Wotan-like darkness and gravitas that knitted the music’s great span together. In terms of weight and drama, though, Mahler’s funeral rites for his hero were self-contained to the point of being detached from the rest of the symphony.

Dudamel’s predilection for slow speeds continued into the second movement, exchanging Mahler’s Andante moderato marking for something close to Andante molto, and in the process making this bubble of Wunderhorn loveliness sound just a bit too mannered. Again, it was beautifully played, with an undeniably echt-Mahlerian world-weary wisdom (where does that come from, I wonder), but it was all getting a bit too episodic, emphatic and operatic. Then in the scherzo, the focus sharpened in some truly excoriating playing (and with a clarinet solo of to-die-for Latin American sexiness) that gathered up loose threads and anticipated what was to come. Everyone has their ‘Resurrection’ trigger moments – one of mine is the cataclysmic outburst near the end of St Anthony’s sermon – achieved with hair-raising urgency, which has the effect of jettisoning worldly care and clearing the decks for a brilliantly half-lit ‘Urlicht’ (Primeval light), the poem’s quiet drama sung to time-suspending and heart-stopping effect by Anna Larsson. The first note of ‘Urlicht’, another trigger-point, is always a surprise, but Larsson brought with it the expectation of transcendent mystery in singing of glorious engagement. It clinched this almost-great performance. Dudamel was entirely at the music’s command in the unfolding of the finale’s wide-open spaces, the off-stage chorales and fanfares coming from another sphere of existence, the rising of the dead properly terrifying, the bird-calls beyond bleak, the gravity-defying precision singing of the chorus seeming to emanate from the Hall itself rather than the choir, and Miah Persson’s singing accelerating the sense of sonic lift-off. Mahler’s vision was pretty thoroughly realised – and there really is nothing so life-affirming as a good ‘Resurrection’.