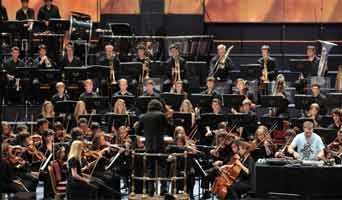 National Youth Orchestra of Great Britain concerts are special occasions at the Proms. There aren’t many times when a concertgoer sees 165 young musicians (aged thirteen to nineteen) performing at the same time, knowing that each of them is the best for their age in the country. For the first half of the concert, though, the NYO was a more-moderate force in terms of numbers.

Gabriel Prokofiev (born 1975) is the son of painter Oleg and the grandson of composer Sergei, whose music for Romeo and Juliet occupied the concert’s second half. Like any descendent of successful figures, Gabriel is keen to establish his own voice. In 2005 Will Dutta – a Trinity College piano student – commissioned Gabriel’s Concerto for Turntables and Orchestra, the composer to write a piece that united the worlds of hip-hop and art music. Written with Duncan Beiny (DJ Yoda) in mind, the composer felt that using hip-hop samples would “bring the two worlds together in head-on collision rather than in a musical way” and so he decided to use recorded sounds made by the orchestra. The 21-minute piece has its backbone in lyrical tonality and is, says the composer, polystylistic and therefore Schnittke-like. The skills of DJ Switch (Anthony John Culverwell) are in no small measure given the samples often imitate the orchestral music and require precise control as the part is precisely notated rhythmically. 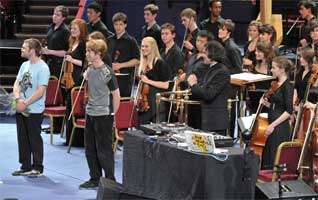 There are five movements, each with a nickname derived from the filenames given by the composer during composition. The first (‘Grim Eye’) features brass and percussion. The second (‘Irreguluv’) moves on swiftly, interplay between orchestra and soloist more pronounced here, the stilted rhythmic patterns making a feature of ‘beat-juggling’ (where samples are manipulated to create a unique composition). After an unexplained pause, when the conductor goes and speaks to the soloist and the orchestra audibly yawns and stretches (perhaps there is an inside joke here), ‘Malmö’ continues with the most substantial music of the piece (slow-swaggeringly fast-slow) and was conceived in Malmö airport. The cadenza that ends ‘Malmö’ (each movement has one) has a feeling of finality that caused a few members of the audience to applaud, soon crushed by an irate “shush!” from the conductor, which turns out to be in the score and thus coincidental to the clapping. The fourth movement reflects upon the pitch manipulation work that John Cage did in the late 1940s and early 1950s. Replacing Cage’s sinusoidal tones with flutes the pieces is expressive in its simplicity, beginning with solo flute and adding until the full orchestra is employed, primarily for colour rather than volume. Gabriel Prokofiev is a talented orchestrator. The finale, a quick gavotte (‘Snow Time’), draws on reggae for a lively and successful conclusion. 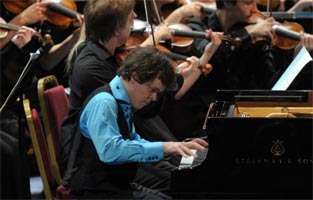 Benjamin Britten’s Piano Concerto is in four movements beginning with a furious ‘Toccata’. Benjamin Grosvenor returned to the Proms to give a commanding reading. Aged 19 he is five years younger than the composer was when he gave the first performance at the 1938 Proms under Sir Henry Wood. Despite the tremendous speed, the musicians managed great clarity and control, Grosvenor playing with panache. Following a beautifully played viola solo, the second movement’s pathos-ridden take on the Viennese waltz was well-characterised. In 1945, Britten replaced the original third movement with an ‘Impromptu’ that is less casual than the title implies as it follows a strict passacaglia form. Only the delicately scored variation for wind and harp was made slightly less so by the presence of five harpists. The finale’s march makes great use of interplay between the first and second violins. Surprisingly, given he does so with the London Philharmonic, Vladimir Jurowski did not have antiphonal fiddles, but he did have the movement’s course firmly set and a crew eager to follow. As an encore, Grosvenor dished out a spellbinding account of Morton Gould’s Boogie Woogie Etude, composed in 1943.

After the interval the outsize NYO played selections from Romeo and Juliet. This begged the question, why play music with these forces that was originally performed in the pit? Leaving that aside, Jurowski’s choice of music from the complete ballet, rather than from the composer’s three Suites, was well thought out. Initially there were some uncharacteristic ensemble issues, most noticeable in ‘Morning Dance’. By the time of ‘The Quarrel’, which shares musical material with the second movement of the Fifth Symphony, the demons had been banished and the conductor was back in control of this very large group. The increased personnel inevitably meant that some rhythmic clarity was compromised, yet balance was never a problem. The ‘scene one’ fight-sequence, taken at breakneck speed was a little scrambled, but mostly felt within reach.

There were some exquisite things, too; in ‘Juliet as a Young Girl’ the strings scampered with ease around the tricky writing. The same piece presented a delightful cello solo, beautifully played by Cecilia Bignall. ‘Dance of the Knights’, the signature-tune to The Apprentice brought a flash of recognition to the eyes of many audience-members, yet it now seems less appropriate for the programme now that the knight – Sir Alan – has been elevated to become Lord Sugar. It was though a rhythmically shabby performance, but good to hear this section in its entirety. The ‘Balcony Scene’ that ends Act One demonstrated the beauty of a solo trio at one extreme and, at the other, the ponderous madness of using six flutes for a line meant for two, although the enlarged string section aided the sumptuous music for Romeo and Juliet’s burgeoning love, as did the five harpists strumming away; delicious if not entirely authentic.

The young musicians’ gifts offered up hope that British orchestras of the future will continue at the top of the leader-board. The performance of music is a social thing and those performers that do not become professionals in the industry will hopefully have a happy memory of this Prom, one that will last for the rest of their days.