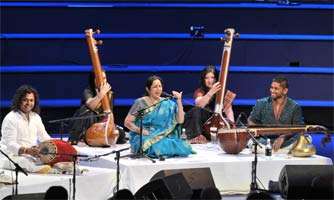 When it launched last year, the ingenious BBC Radio 3 World Routes Academy flung together astounding partnerships of mentor and mentee. At last year’s equivalent Prom, I had the pleasure of seeing maestro Iraqi singer Ilham Al-Madfai performing with the young whippersnapper Khyam Alami on oud. This year it was the turn of the Greenwich-born protégé Hari Sivanesan on veena – an ancient Indian stringed instrument, similar in appearance to the sitar; his ‘guru’ was the star of the show, vocalist Aruna Sairam.

They were brought together to perform, research, discover and dissect the South Indian genre of Carnatic music, which traces its history back to the seventeenth-century. Their World Routes tour took them to Sri Lanka (Sivanesan’s family roots) and South India (where Sairam is based). Their first-ever performance was at a remote shrine in South India, with just a few priests, the Radio 3 team, a handful of visitors and a group of bemused local cricketers. It didn’t take long before their audience was transfixed. 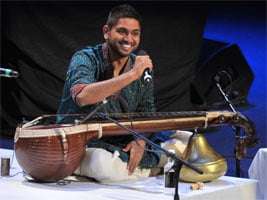 Now at the Royal Albert Hall, in the first Prom solely devoted to Carnatic music, they were certainly able to slip into the transition. With all musicians sitting cross-legged, we were treated to a warm-up instrumental opener, the raga ‘Manavyalakincha Radate’; Sivanesan’s veena was accompanied by the ghatam, resembling to an earthenware water-pot producing an astounding array of sounds, and the ancient Indian drum mridangam, always used to accompany Carnatic music.

Aruna Sairam appeared for the second piece, Kapali, a fascinating combination beginning with a twelfth-century poem to Shiva, moving into a twentieth-century up-beat section. Sairam’s vocals were astounding; surprisingly deep and rich tones, akin to a tenor singer, her right-hand constantly slapping her peacock blue-sari’d thigh for the beat, left-hand reaching out to the audience. “Carnatic music celebrates life in all its colours and emotions”, she’d explained, and her voice is certainly a celebration.

Such performances often take many hours, so for this pared-down Prom, compromises were made. The Ragam, Tanam, Pallavi, Swaram and Tani Avartanam piece usually takes 90 minutes – it was sensibly trimmed down to give the audience a taste of the five contrasting sections. The up-tempo Tanam was the first time we heard Sairam and Sivanesan together, his dancing fingers sliding expertly up the veena’s frets. Interestingly, he and the violin were echoing the soloist’s tune in phrases, rather than accompanying it. A rousing percussion-only finale to that piece brought the other musicians to the fore, with the monotone twang of the Jew’s harp piercing through.

They saved the best ‘til last; the playful Thillana, an eighteenth-century raga depicting the story of Lord Krishna dancing to chase away a five-headed snake. It was a fun, uplifting piece, with Sairam’s soaring vocals sometimes veering towards a chant, a storyteller, her hand mimicking the snake’s undulating movements. Her other hand was still heartily slapping her right thigh.