Continuing its 800-year musical survey with an eye to redressing the gender balance by introducing female composers to the Proms roster, this sixth PCM hadn’t moved much in time and place from No.5’s contribution of Fanny Mendelssohn, as the focus turned to Clara Schumann, with a nod to husband Robert. 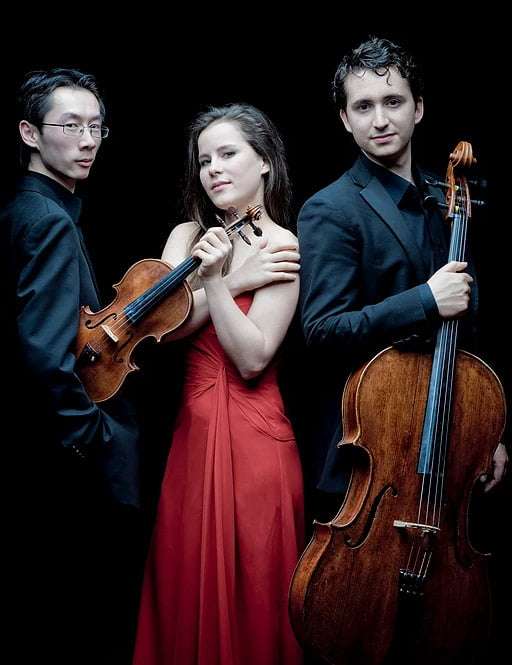 In the genial and capable hands of the Amatis Piano Trio and especially as the August Bank Holiday sun streamed through the venue’s high windows, this was a warm-hearted tribute to a musical marriage that would ultimately end tragically – Clara unable to visit Robert in the mental asylum he was confined to for two-and-a-half years until he was on his deathbed. For the subsequent forty years she ensured Robert’s lasting reputation in her performances and editing his works while neglecting her own compositions.

It was one of Robert’s works that opened the recital – Samuel Shepherd assuming what originally was the horn part. The cello makes the Adagio more seamlessly mellifluous even if the Allegro’s tumbling passions are less muted on the ringing horn.

Clara’s Piano Trio – as I remarked in a programme note for the Royal Liverpool Philharmonic twenty-one years ago – “dates from 1845. With three toddlers, she was expecting her fourth child and – obviously – had to curtail her performing and touring. Stuck at home, she joined Robert in a study of Bach and Cherubini and tried to find time for composing. Robert recognised the problems she suffered in trying to compose, writing (in one of his more perceptive phases): ‘Clara has written a number of smaller pieces which show musicianship and a tenderness of invention such as she has never before attained. But children and a husband who is always living in the realms of imagination do not go well with composition. She cannot work at it regularly, and I am often disturbed to think how many tender ideas are lost because she cannot work them out.’ However, in 1845 she composed – not without some difficulty – this splendid Piano Trio in G minor, probably her longest single work.”

Those joint musical studies, particularly in counterpoint, are clear from the Finale, while the opening movement offers a forceful tutti dotted phrase that punctuates the musical fabric, while the second movement Scherzo utilises a ‘Scotch snap’ as its basis, contrasted with the smoother Trio. The slow movement is rarely slow for long and the wonder is that this work is not played more often. The Amatis Trio gave it with assured aplomb.