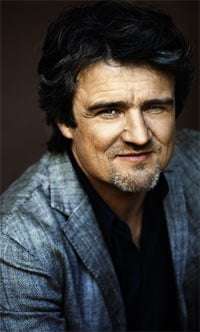 This concert was of especial interest in its marking Ingo Metzmacher’s final appearance as Principal Conductor of Deutsches Symphonie-Orchester Berlin, and with a programme as ambitious as any during the three seasons of his tenure.

Franz Schreker’s “Die ferne Klang” (1910) is one of several German operas from the early twentieth-century that Metzmacher has championed over recent seasons (its sole UK staging was by Opera North in 1992), and its typically fin-de-siècle mixture of emotional intensity with an oblique (and not a little autobiographical) symbolism is fairly encapsulated by Nachtstück – that became an interlude in the third act but was initially a lengthier and semi-autonomous fantasy derived from the opera’s salient motifs. Heard thus, it makes for a worthwhile concert item – Metzmacher intent on bringing out a latent symphonic logic so that the piece unfolded with an organic inevitability towards its powerful climax then back to the sensuous calm from it had emerged.

A generation younger, Erich Wolfgang Korngold was among those composers whose operas – as elaborate in conception as they are in performance – dominated the Austro-German stage until the advent of Nazi-ism. His doomed attempts to re-establish himself in the harsh environment of post-war Europe hardly needs repeating, yet the Violin Concerto (1945) has seldom lacked for admirers – or at least Jascha Heifetz’s electrifying recording of it – and is now firmly established in the repertoire. More recent interpreters have tended to stress the expressive rapture of this music but, without neglecting this aspect, Leonidas Kavakos took a more objective view – bringing out the bittersweet longing the composer teases out of melodies drawn from across the range of his Hollywood film-scores. The highlight was a slow movement no less eloquent for its outward restrained, though the first movement lacked nothing in emotional charge – Kavakos dovetailing the brief cadenza into the reprise with enviable poise – while the finale sounded less of a hopeful potpourri than it often does.

Metzmacher was unfailingly attentive in his support, similarly relishing the burnished richness of Korngold’s orchestration as he had that of “Die tote Stadt” in The Royal Opera’s staging of the opera, and Kavakos acknowledged the warm reception with a skilful and atmospheric account of Francisco Tárrega’s guitar solo Recuerdos de la Alhambra – presumably heard in Ruggiero Ricci’s breathtaking transcription.

After the interval came Mahler’s Seventh Symphony (1905) – his most equivocal and still among his least played, whatever that means these days. Metzmacher gave a lean and incisive account of the Fifth Symphony in London with the Bamberg Symphony Orchestra a decade ago (alongside music by Hartmann and Bartók), and such qualities were no less evident in this performance. The first movement evinced a seamless integration between its slow introduction (the sombre ‘tenor horn’ solo ably rendered) and main allegro; due expressive emphasis being given to the beatific interlude that emerges during the development and effects one of Mahler’s most hair-raising modulations into the reprise – as consummately realised here as a coda that mingled the elated and fatalistic in ideal proportion.

The central movements can be difficult to gauge in terms of formal and expressive relation both to each other and to the work as a whole, but Metzmacher found a purposefulness in the two ‘Nachtmusik’ – bringing out the textural niceties in music that can all too easily lose direction – such as made them complementary in every respect: the first as deftly ironic and inscrutable (its woodwind solos evocatively inflected) as the second was ruminative and alluring (its mandolin and guitar solos as ‘amorous’ as could be wished). In between these, the scherzo was swiftly yet trenchantly dispatched – its spectral connotations thrown into relief by the hymn-like music that is overwhelmed at the climax and merely brushed aside at the close.

The almost bellicose jubilation at the start of the finale might have raised doubts that this most overbearing of movements was destined once more to misfire, but the always-subtle interplay between the main theme and its increasingly ambivalent episodes soon became apparent. In particular, Metzmacher invested the climactic allusions to the work’s opening with the right degree of tension – allowing the sprint to the finish to round off the symphony with requisite lack of inhibition and verve. While there will be more ‘in your face’ accounts of the Seventh both this year and next, there will be few that will be more cohesive or which render Mahler’s often-dense textures with such chamber-like transparency.

The DSO gave its collective all, while the evident rapport between orchestra and conductor amply indicated that this is an association that has by no means run its course. Hopefully, too, Metzmacher will be back in London before long – whether on the concert platform or in the opera pit.