Sondheim
The Frogs – Fanfare; Invocation and Instructions to the Audience
Follies – Overture; Broadway Baby; Too Many Mornings
Sunday in the Park with George – Title Song; Move On
Into the Woods – Agony; Children will Listen
A Little Night Music – Night Waltz; Send in the Clowns; A Weekend in the Country
Sweeney Todd – Prelude; Prologue; The Ballad of Sweeney Todd; Epiphany; A Little Priest
Company – Being Alive
A Funny Thing Happened on the Way to the Forum – Everybody Ought to Have a Maid
Merrily We Roll Along – Our Time
Sunday in the Park with George – Sunday
Company – Side By Side By Side 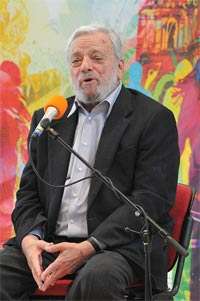 Stephen Sondheim describes himself as a “playwright in song”; a description which has unwittingly done the man a disservice as with it he appears to rank his skills as a wordsmith over those as a composer. Indeed many criticise his music for lacking variety. A cursory glance at the words of ‘Invocation and Instructions to the Audience’ (a list of things to do, and not to do) that opened this “Sondheim at 80” Prom shows his mastery, someone who ranks alongside another Jewish New York-born lyricist, Lorenz Hart. However, Sondheim’s music grows out of the lyrics – his melody, though sometimes quirky, always fits his words like a glove.

Simon Russell Beale and Daniel Evans were the first of the vocalists to appear. Displaying comedic timing by the sackful, the two Shakespearian stalwarts brought Sondheim’s 1974 Greek comedy to life with updated lyrics including references to the mobile phone – the bane of concertgoers throughout the world. In the concert’s second half the pair returned for what must be the campest version of ‘Everybody Ought to Have a Maid’, which included Bryn Terfel in the final reprise and Julian Ovenden, best-known from “Foyle’s War”.

The restoration of the ample orchestrations – revivals of the shows have tended to shrink the size of orchestra – gave each piece depth, most noticeable in the Overture to “Follies” (1971), in a rendition that exposed the lush strings of the BBC Concert Orchestra. Showing that size really does matter, the dramatic organ prelude at the opening of “Sweeney Todd” (the most operatic of Sondheim’s scores) could only be described as awesome when writ large upon the Royal Albert Hall instrument.

The failure on Broadway of “Merrily we Roll Along” led Sondheim to a new collaborator in the guise of author and director James Lapine whose writing was more avant-garde than Sondheim was accustomed to, yet two of his greatest scores (to his own lyrics) – “Sunday in the Park with George” and “Into the Woods” – were fruits of this partnership. Reviving her 2005 role, for which she received an Olivier Award, as Dot in “Sunday…”, Jenna Russell was a natural in the comedic dialogue between the artist Georges Seurat and his long-suffering mistress Dot (probably based upon Madeleine Knobloch – the painter’s common-law wife). The title song, heard at the start of the musical, is much more than a comic aside, it saying much about the relationship between the painter and his muse – thoughtfully portrayed by Russell and expertly accompanied by the BBCCO.

Maria Friedman, another stalwart of West End musical theatre, brought mirth and pathos, first in a beautiful and heartfelt rendition of ‘Children Will Listen’ (“Into the Woods”) and then later alongside Terfel in ‘A Little Priest’ from “Sweeney Todd”. Of the assembled cast it was Terfel who seemed the least comfortable – his voice having no need for the amplification that the other vocalists required.

Judi Dench, who played Desirée in the National Theatre production of “A Little Night Music”, showed exactly why she won an Olivier Award for it. The part, originally written for actress Glynis Johns, has short phrases with a deliberately limited range to suit Johns’s voice. By contrast to Johns’s “nice little silvery voice”, Dench, as she did in 1995, made ‘Send in the clowns’ her own; her croaky voice questioning her character’s life and mistakes made thus far. The performance raised the hairs on the back of the neck; the atmosphere unfortunately cut short by too-early applause.

“Company” broke new ground when it was first produced on Broadway in 1970. This musical deals with upper-middle-class people and their problems – the very same people who had supported Broadway theatre for many years. As Sondheim said in a 2004 interview, “what they came to a musical to avoid, they suddenly find facing them on the stage.” Despite this, the show was a phenomenal success with 705 performances. ‘Being Alive’ is now popular outside of the musical setting. It’s a pity that the various revivals have not been more successful. Julian Ovenden’s restrained performance conveyed perfectly the main character’s loneliness. He was backed by a splendid cast from the Proms Sondheim Ensemble. As with much of Sondheim’s output the music and words tell conflicting stories and maybe the rapturous applause was due more to the familiarity of the song than appreciating this rendition that brought out its ambiguity.

Three vocalists from the BBC Performing Arts Fund made their proms debut with ‘Our Time’. The song, although fitting for singers at the start of their careers, proved not the right one on this occasion, a rendition that lacked the highly polished glint that was ever-present elsewhere; yet, of the trio, Emma Odell has the best Sondheim pedigree, including a workshop production of “Merrily we Roll Along” and as the Baker’s Wife from “Into the Woods”, and hers is a voice to listen out for.

With one final sugar-coated bon-bon in the guise of ‘Sunday’, and ‘Side By Side By Side’ acting like an encore, the evening, packed with probably the best-known of Sondheim’s music and lyrics, drew to a close. Earlier this year Richard Corliss wrote a piece for “Time” magazine entitled “Why Broadway Hates Stephen Sondheim”. He quite correctly points out that Sondheim’s lyrics are often so complex that they need to be listened to more than once and that his tunes are far from hummable. Sondheim is writing musical theatre for a more sophisticated audience – “popular art for grownups” is how Corliss describes it, and as such it needs to be allowed to stand the test of time without being judged on box-office receipts.

Notwithstanding the insecurities of Sondheim the man, this Prom should prove a highlight of the 2010 season. With the composer present to watch an all-star cast from stage and screen performing some of the most celebrated theatre music written in the last half-century, add to which goose-bumps when Sondheim approached the stage at the concert’s end to tumultuous applause.