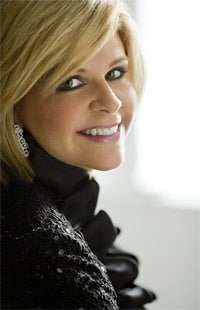 Susan Graham and Malcolm Martineau have been touring a comprehensive recital of French mélodie, one of their ports of call being Wigmore Hall in February 2008, and the whole can also be heard on a release from Onyx CD. They have also devised a slimmed-down version and presented it for Proms Chamber Music.

The original programme contained twenty-four songs and was divided into two halves, with equal attention devoted to songs written in the nineteenth- and twentieth-centuries. As such, a continuous thread of development could be traced and peripheral figures illustrated. In this case there was little room for the latter (no Lalo or Paladilhe, for example), while the seminal figure of Gounod was absent, as, perversely, was the star which sustains the solar system of mélodie, Fauré.

Nevertheless, what remained constituted a satisfying recital, its shortness removing the need for the singer to conserve her resources. Susan Graham seemed bolder in vocal projection, more direct in enacting character and situation and crisper in enunciation of the French texts, the latter assisted by the clean acoustic of Cadogan Hall, which I would like to see hosting more solo vocal events than it has up to now.

Bizet’s “Chanson d’avril” was a challenging opening. At the brisk speed chosen Graham needed to snatch breaths in long hurried phrases and to negotiate sudden pianos at the peak of arching phrases around the top of the stave. The following Franck “Nocturne” offered different tests, with the voice required to sustain slow soft phrases and a soft, held F in the final line, which sagged a little. An adjudicator might have withheld some marks in both of these songs but the moments of less-than-perfect execution were redeemed by much more extrovert interpretation. In the Bizet the signs of the sap rising in nature were hailed triumphantly and the analogy for the poet and his beloved wickedly insinuated. In the perfumed atmosphere of Franck’s Wagner-influenced music the intensity control was unashamedly turned up. 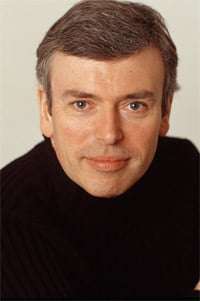 Bachelet’s nocturnal celebration, composed for Melba, is a display-piece. Its vocal exercises mainly revolve around hairpin dynamics, with the singer required to build and release volume frequently. If the Australian soprano may have shown greater technical proficiency than her lower-voiced successor she is unlikely to have imbued the romantic music with the warmth given it by Graham.

Chabrier is one of the most fascinating figures both in opera and mélodie. His daring depiction of the symphony of cicadas was brilliantly rendered by Malcolm Martineau, sharing a delightful performance with his partner, whose response to the sound was first exasperated, then amused and finally resigned. Chabrier’s teasing postlude was drawn out by Martineau and tempted one listener to applaud prematurely.

The recital was naturally divided after the Duparc by an endearingly spontaneous conversation between the artists and BBC Radio 3 announcer Louise Fryer. Texan Graham told how at the age of 15 her initial musical taste for “Cowboy songs” was re-directed by her voice teacher giving her Fauré’s “Après un rêve” to study. The fact that she trained as a pianist also sharpened her awareness of the importance of the partnership between voice and accompaniment in song. Martineau for his part drew attention to the subtext often delivered by the piano part. He had just demonstrated that very point with his playing of Duparc’s subtly differentiated accompaniments to each verse of the preceding song, alongside Graham’s powerful operatic treatment of the voice part.

The recital resumed with the move into the twentieth-century and from the supremacy of melody to that of text. Graham cultivated a beautifully ambiguous stance as she told the story of the peacock’s vain mating display (as set by Ravel), part objective, part disapproving. The shrug of the shoulders at “La fiancée n’arrive pas” and the tumbling arpeggio at “Si sûr d’être beau qu’il est incapable de rancune” were priceless.

When called on to play specific characters Graham’s use of the upper body was a major communication aid. In Caplet’s setting of a La Fontaine fable the events and feelings of the protagonists were vividly acted out. The fox’s flattery, with its wide phrasing, the crow’s swelling pride and subsequent crestfallen humiliation, set in relief by the pianist’s fragmentary discords, were memorable. The voice has a particularly strong low register, ideal for the tessitura of this song.

Graham’s comic talents were even better displayed in her ersatz portrayal of an English aristocrat in Rosenthals’s “La souris d’Angleterre”. Understated refinement, sartorial extravagance, self-indulgence, all were transmitted and crowned by a little sentimental snuffle at the mouse’s fate, even if it took a piece of Cheshire cheese to do the trick!

These artists were just as impressive in the serious songs. Roussel’s woman as victim, forced to play the part of obedient wife according to the very social conventions which have trapped her in a loveless marriage, received a superb portrayal by Graham, the soft centre beneath the hard exterior embodied in hushed pianissimo singing of the final regretful phrase.

Is there a greater mélodie than Debussy’s setting of Verlaine’s “Colloque sentimental”? This performance was at the highest level. The scene was set by Martineau’s isolated snowflakes and ice crystals and by Graham’s white evanescent tone. Then the characters were temporarily transformed into flesh and blood creatures, the woman passionate, the man unmoved, before they faded back imperceptibly into the frozen scene.

Both performers and audience seemed particularly moved by the encore, Hahn’s “A Chloris”.

I know more opulent voices among the current generation of star mezzos but Graham’s precise enunciation of the French language and her ability to draw out the full latent meaning in these mélodies by physical and vocal means places her at the peak of this particular métier.