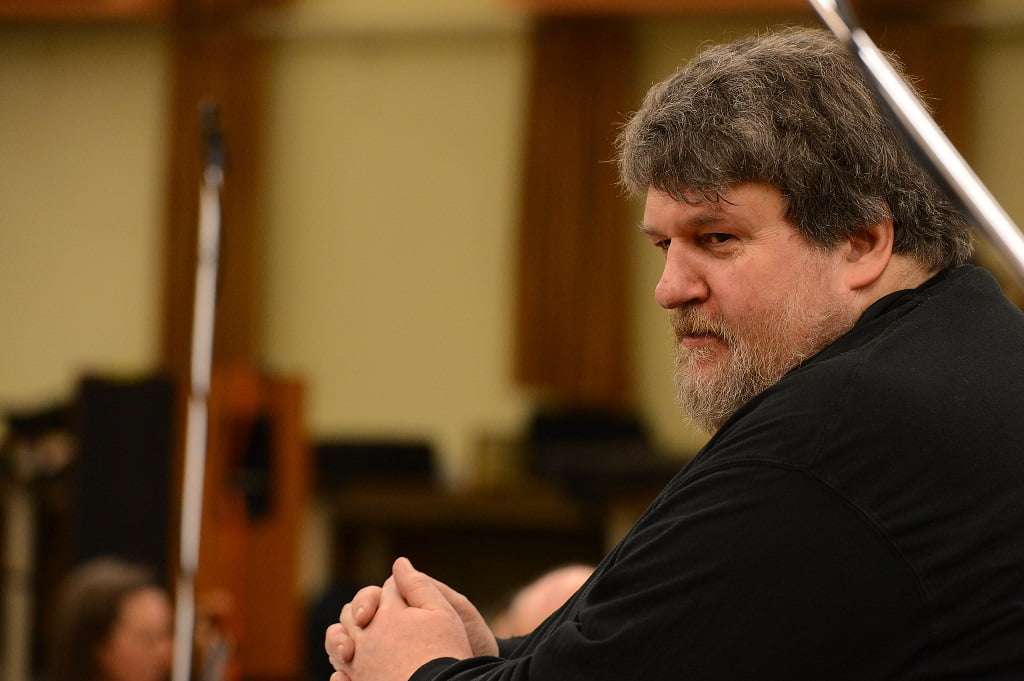 As far as I remember, apart from shaking his hand at some musical event or other, the first time I really met Oliver Knussen was soon after I went to work for the music publisher Schott in 1997. The London Sinfonietta was giving the premiere of Alexander Goehr’s Idées fixes and there was a party after the concert. As the new boy and not knowing anyone, I was feeling rather out of it, but Olly sat me next to him, and talked to me as if I was the most important person in the room. Finding out that I worked with choirs, he told me that he had no idea how to write choral music or conduct choruses – it struck me as an astonishing thing to say to a stranger, but as I got to know him better I realised that it was an entirely characteristic ploy to make me feel comfortable. From that moment on I respected him even more – if that was possible.

Thankfully, Olly was a long-standing champion of many composers who were then in the Schott catalogue –Goehr, Takemitsu, Henze, Hesketh, Turnage, amongst others, and so our meetings became more and more frequent, in recording studios, concert halls and most memorably perhaps at his home in Snape, were in the late-1990s and early-2000s I used to turn up to stay when there were events on locally, or more often than not just for the sake of it! What struck me more than anything, perhaps inevitably, was the level of disorganisation (something that was just the opposite of Olly’s music but something that I secretly rather loved), but most of all, the astonishing treasure chest that was the Knussen score/LP/CD collection. I’d never and have never since seen anything like it: scores, recordings, books, videos, DVDs, covering every conceivable space in every room. However obscure the piece, it was bound to be on the Knussen shelves – although one of the other delights of these visits was to try and take music that Olly wouldn’t know – not an easy task, but I managed it occasionally.

Despite those heaving shelves, we still spent many hours in record shops (when such things existed) in London, New York, Chicago and elsewhere, as there were always more recordings to look for. Slightly less culturally high-brow, there were also regular and huge marathons of Curb Your Enthusiasm and South Park – but that I learnt was all part of the complex Olly Knussen – the expected and the unexpected, the high intellect and the grubby sense of humour, the most complex of contemporary music (of which he had an encyclopaedic knowledge) and sheer joy in music of unparalleled awfulness, films and novels of mystifying depth, but also the poetry of William McGonagall – I think my most successful gift was a book of McGonagall’s I had found in an antiques-shop in Yorkshire.

Visits to foreign cities always brought trips to great art galleries – Olly knew a huge amount about visual art too. All that and the ridiculous games – anagrams of composer’s names (that might have been invented by Edna Trident Hornbryce – Richard Rodney Bennett); fantasy concert programmes – my favourite perhaps being Pierre Boulez conducting his own Notations alongside Gershwin’s Piano Concerto and Malcolm Arnold’s Tam O’Shanter, and following on from the fact that Britten had a nurse named Rita … what would happen if all composers had a nurse named Rita? – Rita Rigoletto (Verdi), Rita Rusticana (Mascagni)… Very silly – but rather wonderful too!

For various reasons we saw each other less often for a few years, but our meetings picked up again thanks to the appointment Olly took up at the Royal Academy of Music (a inspired move on the part of the Principal, Jonathan Freeman-Atwood, and the Head of Composition, Philip Cashian) – I’ve rarely seen Olly so happy and fulfilled. Every time I saw him there, he seemed to be on incredible form. He was completely at home and the students clearly were in awe but also adored him.

I last saw Olly in early June at the BBC Maida Vale Studios – he was rehearsing Huw Watkins and the BBC SO in Cashian’s brilliant but very difficult new Piano Concerto. Once again, I sat open-mouthed at his rehearsal technique, the incredible ears (he really could hear everything), the economy of gesture and the way he held the SO in the palm of his hand – just extraordinary. Afterwards, we sat in the studio and talked – somehow we got on to doing what we often did, reminiscing, this time about Hans Werner Henze, whom we both knew, loved and often visited at his home in the hills above Rome. Henze was one of the many composers that Olly conducted better than anyone else. As always there was a lot of laughter and time just raced on – now I can’t believe that I had to go to another appointment, Olly clearly didn’t want to stop. Curiously enough we also talked about a rather bizarre recent request I had had to conduct something I would never dream of doing and wasn’t sure I could: Olly’s advice was “I always regret saying no when asked to conduct Wozzeck … life is too short to say no … come and visit…”.

I view it as one of the most wonderful accidents of my life that our paths crossed at all – that this wonderful, witty, anarchic, warm-hearted, patient, impossible genius became someone that I regarded as a friend, is a stroke of amazing fortune.