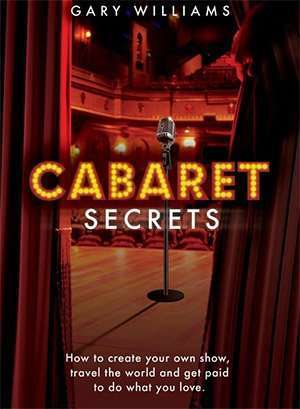 Is cabaret the most difficult branch of show business to get right? The answer is probably yes, particularly if it’s one person up there in the spotlight with nobody to help out, except the accompanying musician(s). Many artists have tried cabaret and failed, opting for the relative safety of music theatre, a fully cast show with a plot and involving the pretence of being someone else. It’s why many become actors, to avoid being themselves. That doesn’t stop performers sometimes getting stage-fright.

You certainly need the right kind of personality as well as some kind of talent to succeed as a cabaret performer. So let us assume you have a good voice and a repertoire of songs to suit all tastes. You still need a personality. You have to be able to take the audience into your confidence, make the spectators feel comfortable in your presence and be able to talk to them: they should be hanging on every note and every word. It’s akin to being a stand-up comic – you have to keep interest alive by telling a better joke, or in this case singing a better song – each time – to create a personal world and let the audience sample it.

The Crazy Coqs cabaret room at Brasserie Zédel, off London’s Regent Street, has demonstrated the wide range of artists who have successfully mastered the difficult art of cabaret performance, including Americans Steve Ross, Amanda McBroom, Judy Carmichael, Gregg Edelman, Karen Mason, Bryan Batt, Tim Flavin and Shana Farr, and UK talent such as Sophie-Louise Dann, Stefan Bednarczyk, Dominic Alldis, John Standing, Robert Habermann, Miss Hope Springs, Anne Reid (who late in life took to the cabaret stage with immense confidence) and Gary Williams. Williams, great traveller that he is, has gathered much good advice from fellow performers and others and put it all into his Cabaret Secrets guide.

Gary Williams is one of the hardest-working singers on the international circuit. Who better than he, then, to write a book about what it takes to be a successful cabaret artist? He has appeared in every type of venue – small clubs and nightspots, radio and television, and West End theatres where he won acclaim starring as Frank Sinatra in The Rat Pack. Nor is he a stranger to the cruise ships that rely on performers like Williams to keep their guests entertained. He has been here, there and everywhere and probably met everybody in the cabaret world on the way.

Gary Williams imparts sixteen ‘cabaret secrets’ during his journey, giving advice to the beginner and covering important topics such as being prepared and making sure you rehearse everything – not just songs but every word of introduction. You must also be sincere in everything said and sung and to structure your show to get the right balance of songs and speech – and get to know and love your musicians, because they can make or break you: good advice for the neophyte performer.

Supplementary to the book is a glossary of musical and theatrical terms. The appendices form a useful guide, as they are analyses of famous singers and their acts. They include a template of Matt Monro’s concert Live in Australia, from the opening section, through the songs and right down to the chat at the finale. Other analyses are of Michael Bublé’s Caught in the Act, Celine Dion’s A New Day, and Amy Winehouse Live at Glastonbury. It all goes towards making an ideal vade mecum for anybody who wants to succeed in cabaret.