Richard Strauss
Elektra, Op.58 – Tragedy in one act to a libretto by Hugo von Hofmansthal, based on his own play after the tragedy by Sophocles 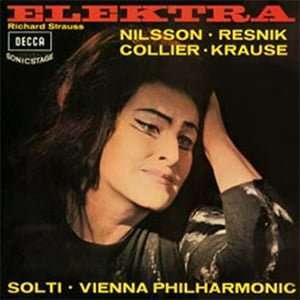 During the late 1950s and 1960s Decca had a stellar roster of opera singers to call on, and a magnificent recording team headed-up by John Culshaw (who produced Solti’s ‘Ring’). So its decision to do the two wonderfully OTT early Richard Strauss music-dramas, Salome and Elektra, was not surprising, especially when Decca had arguably the greatest dramatic soprano since Frieda Leider, Birgit Nilsson, to sing the title roles, and Georg Solti and the Vienna Philharmonic Orchestra in the pit, fresh from the triumph of the ‘Ring’. When first issued, the Elektra walked out of shops, and if you look at the lacquer, mother and stamper numbers on the discs (Decca very kindly provided future vinyl junkies with this information), it is clear that even before the end of the valve/tube era in 1968, a huge number of copies had been sold.

In terms of performance, it has never been surpassed, and rarely equalled. Elektra was first performed in Dresden in 1909, and effortlessly combines extreme chromaticism, savage dissonance, atonality, and late German Romantic lyricism, within a rich tapestry of Wagnerian Leitmotifs, in a way that Strauss would never again equal. The central character, Princess Elektra, is a complete psycho, obsessed with avenging the murder of her beloved father Agamemnon by Aegisth, and what to her is just as bad, her mother Klytemnestra’s marriage to the murderer (in Hofmansthal’s masterly synthesis of Sophocles and Freud, real-politik plays no part) both of whom treat her – quite literally – like a dog. In the theatre the protagonist is hardly ever off the stage, there is no interval, and the vocal line is cruelly demanding. Quite apart from the awkward intervals, and searingly high tessitura, Strauss often pits Elektra (and Klytemnestra) against the large orchestra; indeed, Strauss reputedly shouted to the orchestra at the Dresden dress-rehearsal “Louder, I can still hear Frau Heink” (Schumann-Heink was the first Klytemnestra).

In the recording studio there are of course breaks, and the balance between voice and orchestra can be manipulated, but by any standards Nilsson’s Elektra remains a classic. Unlike many dramatic sopranos she had an effortless, gleaming top, which allowed her to ride the orchestra effortlessly, from her long opening monologue onwards it is terrifyingly intense, and the only fault is an occasional lapse in intonation in quieter passages.

She is partnered by the great American mezzo-soprano Regina Resnik, who portrays vividly the spiritual and physical disintegration of Klytemnestra, and whose laughter at the end of her confrontation with Elektra is magnificent. In any production of Elektra you have to feel sorry for Chrysothemis, who has to listen to her sister’s ravings, shows genuine compassion, believes in love (concepts completely foreign to her mother and sister) and never seems quite with it! Marie Collier (who at the time was a leading soprano at Covent Garden in mainly Italian lyric roles) portrays superbly all of this, and is able to match Nilsson in dramatic intensity in the closing scene. Tom Krause – in heroic voice – is suitably implacable and impassioned as Orest, Gerhard Stolze is definitive as Aegisth, and all of the smaller roles are beautifully realised; which leaves us with Solti’s conducting and the playing.

From the arresting statement of Agamemnon’s theme that opens the work, the minute attention to detail and balancing in the scene with the maids (who act as a Greek chorus), the massive attack, and the way that he lets the orchestra soar in Elektra’s huge monologue, it is clear that Solti is not going to take any prisoners, and the Vienna Philharmonic plays magnificently. Some have argued that in the ‘Recognition’ scene between Elektra and her exiled brother Orest, Solti does not relax enough, but Elektra needs to be a fast-moving journey to the final blood and mayhem and in which lush sentimentality should play no part. 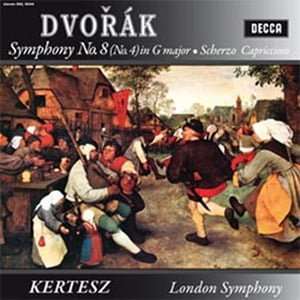 Dvořák’s Eighth Symphony and Scherzo capriccioso inhabit a rather more urbane and genial world, but István Kertész’s approach to them is similarly direct. Thankfully, he did not see the first movement’s second subject (or any new theme or episode) as an excuse to grind to a halt, which means there is never any lack of impetus or momentum, nor is the structure of either work compromised. Kertész does mould the line, use rubato, strictly controlled tempo and dynamic variation, and pays close attention to detail and balance, and the results are marvellously idiomatic, expressive, and invigorating. As with Solti and the Vienna Philharmonic, Kertész’s relationship with the LSO was very close, and it plays magnificently.

The sound in both performances is outstanding. Anyone wanting to hear what is wrong with digital sound need only listen to the end of the Scherzo capriccioso. There is depth and width, huge presence, every section of the orchestra is clearly audible (the final timpani role is startlingly realistic) the timbre of each instrument can be heard, and the ersatz quality found in even the best quality 24bit high-resolution recordings is completely absent. With regard to the human voice, again there is a sense of richness and natural resonance that places Nilsson very firmly in your living room, and to hear her and the Vienna Philharmonic exult takes your breath away.

Both recordings were compared with first-label pressings, and in both cases the Speakers Corner discs have more projection, power and a better controlled bass. Cheap they are not, but if anyone wonders why increasingly large numbers of people rave about vinyl, then these discs demonstrate why.