One of America’s great movie actresses and singers, Doris Day has died from pneumonia at the age of ninety-seven. Born Doris Ann Kappelhoff in Cincinnati, Ohio, to music teacher William Kappelhoff and his wife Alma, Doris always liked to dance and formed an act with a friend, Jerry Doherty. After winning a local talent contest they headed for Hollywood but an injury in a car accident put an end to Doris’s dancing career. Instead she took to singing and by the age of seventeen she was touring with the Les Brown Band. She married trombonist Al Jorden but they divorced after their son Terry was born. Her agent got Doris a screen test at Warner Bros and she was put under contract to the studio. 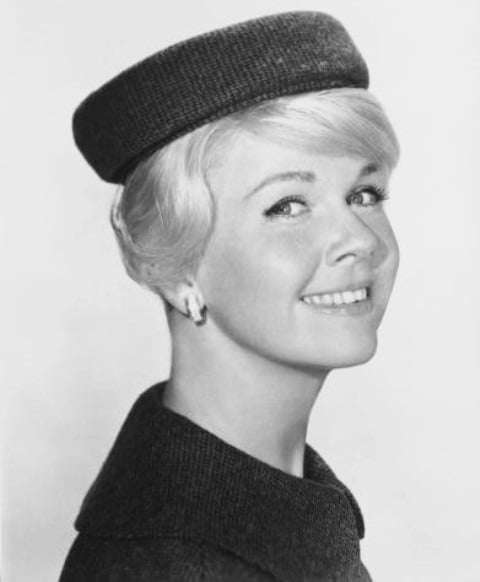 Her first major film was Romance on the High Seas in 1948 (UK title: It’s Magic) and then cinema history began to be made. Her acting skills, her singing and her personality combined to make Day a popular star and found her in many entertaining musical films including My Dream Is Yours, It’s a Great Feeling, Young Man of Music (with Kirk Douglas), Tea for Two, Fine and Dandy, Lullaby of Broadway, On Moonlight Bay, I’ll See You In My Dreams, April in Paris, By the Light of the Silvery Moon and, with Frank Sinatra, Young at Heart.

However, Doris also proved her skills at dramatic acting in such titles as The Winning Team, and Storm Warning, and, much later in Love Me or Leave Me (playing singer Ruth Etting), in Hitchcock’s The Man Who Knew Too Much (for which the song ‘Que Sera Sera’ won an Academy Award). But for the most part she stayed with musicals and romantic comedies long before the rom-com genre had been invented.

Calamity Jane (1953) was a big hit and her own favourite, one of the great original film musicals with terrific songs by Sammy Fain and Paul Francis Webster, such as ‘The Deadwood Stage’, ‘Introducing Henry Miller’, ‘Hive Full of Honey’, ‘Just Blew in from the Windy City’, ‘A Woman’s Touch’ and more including the Oscar-winning ‘Secret Love’. Doris also starred in The Pajama Game and Billy Rose’s Jumbo, her last film musical in 1962.

By then she had reinvented herself in comedy, appearing with Rock Hudson in Pillow Talk, Lover Come Back, and Send Me No Flowers, then That Touch of Mink with Cary Grant, The Thrill of It All and Move Over, Darling with James Garner, and Do Not Disturb and The Glass-Bottomed Boat with Rod Taylor. She made a few more films in the late-1960s, the last being With Six You Get Eggroll in 1968, but by then her movie time had passed. She then had her own television show, which she produced herself for five years till 1973 and, apart from guest appearances on other shows and another series in the mid-1980s, Doris Day retired from show-business.

She had married her second husband, actor/musician George Weidler, in 1946 but they divorced in 1949. She married her third, producer Martin Melcher, in 1951. When he died in 1968 she found that he had lost all of her money through bad investments, although she recovered some of it through the courts. After marrying and divorcing her fourth, restaurant maître-d’hôtel Barry Comden in 1982, she devoted her life to running the Doris Day Animal League in Carmel, California. As well as her film career, as a singer Doris Day issued over twenty albums and many singles. She sang the title songs of her 1960s-comedies and many of her recordings have been used in other films and television shows. She was inducted into the Grammy Hall of Fame and won a Grammy Lifetime Achievement Award among many other awards. Although she never won an Oscar, she was nominated for Pillow Talk.

Doris Day was always seen as a lady of class. Her comedies were never too racy and, although she may have appeared prim and proper, she appealed to everybody. When offered the part of Mrs Robinson in The Graduate, she turned it down because she had a reputation to uphold and she wanted to hang on to it. Oscar Levant once described Doris’s first film, Romance on the High Seas, as being made “before she became a virgin.” Joking aside, Doris Day remains an icon in the world of entertainment. The last word goes to President George W. Bush: “Doris Day is one of the greats, and America will always love its sweetheart.”