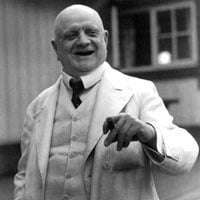 Composer anniversaries come and go, with some more significant than others. In the case of Jean Sibelius the opportunity given by the 50th-anniversary of his death in 1957 provides for a fundamental reappraisal of the breadth of his compositions as much as recognising the heights he rose to in his most significant orchestral works.

Sibelius was born in 1865 – when Berlioz and Rossini were still alive – the year that Wagner’s “Tristan und Isolde” was premiered – and died 91 years later (on 20 September 1957) when Stockhausen and Boulez were establishing a new order in music. So not only can the breadth of Sibelius’s own music be considered but also that Sibelius himself can be set within the framework of the tremendous changes to musical evolution during his lifetime.

This song-recital at St John’s, Smith Square, began the three-month-long celebration “Sibelius & Beyond” hosted jointly by the Finnish Institute and the English Chamber Orchestra: “A celebration of Finnish music presented in London’s leading music venues”. The joint Patrons are the music-loving The Lord Mayor of the City of London, Alderman John Stuttard, and the piano-playing Ambassador of Finland, Jaakko Laajava.

Numerous contributions are to come from both specialist sources such as the UK Sibelius Society, offering some valuable Sibelius premières in the UK, and international orchestras such as the Los Angeles Philharmonic with Esa-Pekka Salonen due in town to play the symphony cycle at the Barbican Hall in November.

Sibelius’s symphonies, apart from, perhaps, the shamefully neglected No.4, are now well-known as are staple concert items such as the Violin Concerto, Finlandia, the Karelia Suite and Valse triste. But Sibelius was a much broader composer than given credit for, even today. He wrote in virtually every medium, even opera though he never aspired, sadly, to producing the definitive Sibelian view of ‘opera’ in the way he achieved with the ‘symphony’. Songs, instrumental and chamber music, theatre music, choral works (a cappella and with orchestra) make up the bulk of his output as was befitting his pre-eminent role within Finnish society struggling with and ultimately achieving freedom from foreign (Russian) ownership.

“Sibelius & Beyond” has been crafted to show most of this range of Sibelius’s work including due attention to the early, pre-orchestral output, comprising substantial chamber works. However, songs were chosen to open the Festival.

During the Festival, Sibelius will be contrasted with, mainly, contemporary and subsequent Finnish composers. This song-recital, acting as an appetiser, therefore included songs by Merikanto, father and son, Oskar and Aarre respectively. It began, somewhat strangely, despite the coincidence of anniversaries, with the Finnish soprano, Mari Palo, singing Grieg in Norwegian! Beethoven was also heard sung by Jussi Myllys.

Otherwise there were six Sibelius songs and five by the Merikantos, all worthwhile hearing. Both singers are young and on the cusp of their careers. The pianist, Tuula Hällström displayed marked sensitivity to the many and various moods heard during the recital.

Future concerts present a wonderful opportunity to hear some of Sibelius’s early chamber music, including his three ambitious piano trios, to be played at the Wigmore Hall (18 September) and Leighton House (19th). On the anniversary day itself, 20 September, again at Wigmore Hall, the legendary Finnish baritone, Jorma Hynninen, essays some of Sibelius’s finest settings as part of an all-Sibelius Anniversary Concert. The Festival continues with major concerts throughout October and November and culminates, fittingly, with Sibelius’s most underplayed masterpiece, the Fourth Symphony, to be performed by the Tampere Philharmonic Orchestra under John Storgårds on Wednesday 5 December at Cadogan Hall. Don’t miss it!