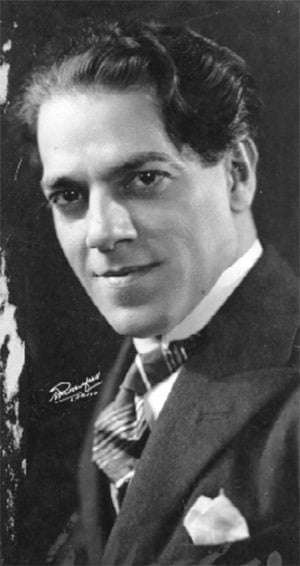 Descobrimento do Brasil – Suite No.4

The music of Heitor Villa-Lobos (1887-1959) presents something of a conundrum in that, while it has never sunk into oblivion, its scope and ambition remain largely unknown to the listening public at large. A composer, then, who was ideally suited to the concentrated presentation of a BBC Symphony Orchestra Total Immersion day: an event that duly took place at the Barbican Centre as well as adjacent venues – taking in the customary talks and films along with three concerts focussing on chamber, choral and orchestral music respectively. 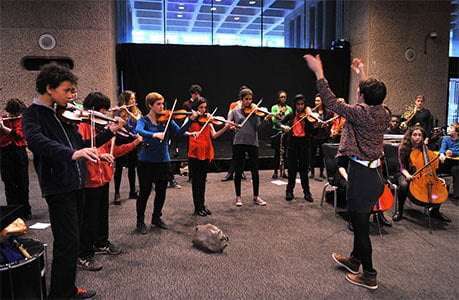 The early concert at Milton Court took in a range of chamber works as rendered by Guildhall School Musicians. First came the Quinteto en forma de chôros (1928) for wind quintet [Jessica Kabirat (flute), Grace Warren (oboe), Rebekah Carpio (clarinet), Jamie White (bassoon) and Molly Flanagan (horn)] – a single-movement piece whose gradual acceleration and intensifying over two successive stages saw an uninhibited take on the composer’s idealised evocation of the ‘street music’ from his youth that played a defining role in his output. The musicians responded in like fashion – after which, flautist Rebecca Carson and cellist Yoanna Prodanova were no less inside the idiom of Assobio a játo (1950) – a compact and characterful piece in three formally balanced movements, the ‘jet whistle’ of whose title comes to the fore during the raucous abandon of the closing bars. The tendency of Villa-Lobos’s music to become more rigorous and even Classical in his last years was typified by Quinteto instrumental (1957) for quintet [Rebecca Griffiths (flute), Yolanda Bruno (violin), Moira Bette (viola), Toby White (cello) and Zuzanna Olbrys (harp)] – its neutral title a pointer to the formal abstraction and motivic intricacy, yet also the lucid discourse of this most immediately appealing among its composer’s later chamber works.

Prior to this final work, soprano Lorena Paz Nieto and pianist Kaoru Wada gave a selection from Villa-Lobos’s songs – both those larger collections that extend over his output as well as stand-alone items. One of the latter is Amoy y perfida (Love and Treachery, 1918), its sultry undertones as eloquently conveyed as were the glancing ironies of ‘Pudor’ (Sense of Decency) and ‘Perversidade’ (Perversity) from the Epigramas irônicas (1920/3) which are arguably the composer’s most important cycles. The Modinhas e cançoes are more generalised collections, yet three taken from the first set – the yearning ‘Cançao do marinheiro’ (Sailor’s Song, 1936), the melodramatic ‘Lundú da Marqueza de Santos’ (Lament of the Marqueza de Santos, 1940), and insouciant ‘Cantilena’ (Song, 1938) – intrigued and delighted in equal measure. 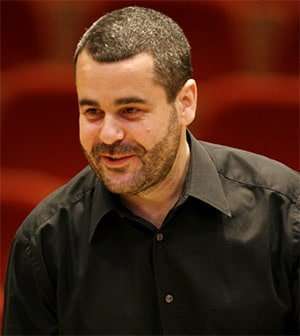 The middle concert was designated “An introduction to the choral music of Villa-Lobos”, which summed up this overview of a vast yet (at least outside of Brazil) largely neglected facet of his output. All the main traits were represented – beginning with the folk-inflected vibrancy of Two Amerindian Legends in Nheengatu (1952) and its evocative portrayal of the devilish spirit Juruparí in its respective dealings with the child and the hunter, and then continuing with Ascostureiras (The Girls are Sewing, 1932), its political connotation offset by the warmth of its depiction. Two versions of the Ave Maria – a limpid setting in Portuguese (1938) and a more expressively ambivalent one in Latin (1948) – were an ideal entrée into the composer’s sacred music, which continued with understated settings of Pater noster (1950), Ave verum corpus (1930) and Panis angelicus (1950); then by a more polyphonically intricate setting of O salutaris hostia (1916) that also found its way into the Música sacra volume (1952) which remains one of Villa-Lobos’s most widely disseminated publications. Also heard was Bendita Sabedoria (1958), six epigrammatic settings from Proverbs and the Psalms of an autumnal radiance as refined as it was moving, and Praesepe (The Manger, 1952) – a wistful account of the Christmas narrative in which mezzo-soprano Rebecca Lodge eloquently assumed the solo line.

Interspersed between these works were seven of the 12 Etudes (1924-29) through which Villa-Lobos sought to redefine the possibilities of the guitar (though his response to the artistry of Andrés Segovia, for whom they were written, was seemingly not always complimentary!). Sean Shibe gave performances that were fastidious in their attention to detail and expressive nuance, for all that the frequently extraneous sounds on the finger-board tended to be enlarged by the atmospheric immediacy of the Milton Hall acoustic. This latter, however, came into its own during the account of the Ninth Bachianas brasileiras (1945) which closed the programme. Also playable by string orchestra, it is in the guise for an “orchestra of voices” (the composer’s description) that this piece has most fully come into its own: the calm and hieratic ‘Prelude’ followed by a ‘Fugue’ where the vocalising on specific syllables focuses attention on the contrapuntal and rhythmic ingenuity with which Villa-Lobos builds this impressive homage to the Western composer he revered above all others. It was rendered – as were all the choral pieces in this programme – with exemplary clarity and articulation by the BBC Singers under the assured guidance of Celso Antunes, his many and varied expressive gestures speaking of a deep commitment to the Brazilian composer. 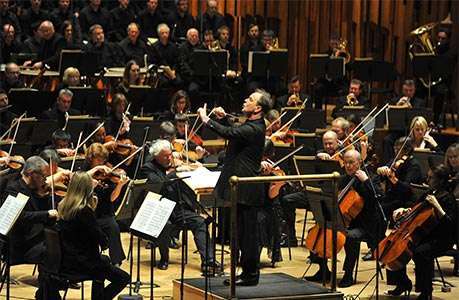 The final concert, by the BBC Symphony Orchestra and Sakari Oramo, brought a culmination in all respects: rarely in London can so many larger works by Villa-Lobos have been heard in one programme. What to include no doubt gave those involved pause for thought, but it was an excellent idea to begin with Uirapurú (1917) – the tone poem-cum-ballet which finds the composer mining a similar post-Impressionism to Stravinsky in Chant du Rossignol. The orchestration, not realised until 18 years later, has a range and brilliance such as Villa-Lobos arguably never surpassed – highly appropriate given its inspiration in an Amazonian legend about the near-mythical bird of the title. The BBCSO responded with due virtuosity, novelties such as the violinophone (a prototype for the electric violin) leaving their unmistakable mark.

Those who attended the whole day had earlier enjoyed a rare screening of Humberto Mauro’s groundbreaking and (not inappropriately) primitive-looking film O Descobrimento do Brasil (1937) for which Villa-Lobos supplied a score well in excess of its hour-long duration. Quite understandable that he should not merely recycle but expand the music over four suites – of which the Fourth, ‘Oratorio: The First Mass in Brazil’, builds on those scenes in which the Portuguese sailors carry ashore a wooden cross to the mingled sounds of sacred chant and Amerindian chanting. The overall impact is both exhilarating and (not least with hindsight) unnerving, enhanced by the sureness with which the composer integrates chorus and orchestra in a fusion of divergent cultures and a ‘world music’ far in advance of its time.

Within so lavish a context, it made sense to insert a shorter and more intimate piece – and if this was the Fifth Bachianas brasileiras (1938/45), then so much the better. Villa-Lobos’s best-known work, the first of its two movements has latterly been attempted by singers wholly ill-suited to the task – making the contribution of Anu Komsi the more welcome. She spun a dextrous line throughout the ‘Ária (Cantilena)’ – its bewitching vocalise thrown into relief by the warmly rhetorical setting of Ruth Valadares Corréa at its centre – then brought lithe energy to the ‘Dança (Martelo)’ with its impetuous setting of Manuel Bandeira. The eight cellists of the BBCSO (a concert could be devoted to Villa-Lobos’s music for ‘cello orchestra’) acquitted themselves with honour in the nimbly resourceful accompaniment.

Not all Villa-Lobos’s larger undertakings are equally successful. One such is Chôros No.8 (1925), to whose sizable orchestra are added two pianos – the complexity of their parts being pretty much overwhelmed by the forces ranged against them (especially when situated within the orchestra to preclude a concertante function) – but this was not to decry the contributions of Kathryn Stott and Martin Roscoe, who despatched the treacherous writing with alacrity. Formally the piece alternates its contrasting main ideas with increasing abandon on the way to a vehement close, the sustained final brass chord projecting the spirit of this music into eternity. Oramo drew a terrific response from the BBCSO, though it was hard not to feel that the composer here placed too great an emphasis on atmosphere as opposed to content.

Not so the Ninth Symphony (1952), whose belated inclusion in this programme was more than welcome. Villa-Lobos’s dozen contributions to the genre have never garnered more than cursory attention, yet the fact that the present work was commissioned by Eugene Ormandy and the Philadelphia Orchestra underlines the esteem in which the composer was held during his later years. A piece, moreover, whose four movements are as compact (the whole lasting barely 20 minutes) as they are cohesive – moving from an animated opening Allegro, via an Adagio of sustained inwardness and scherzo of irresistible vivacity, to a final Allegro giusto that brings matters full-circle with its propulsive energy. A work that also gives the lie to the notion Villa-Lobos was incapable of writing with discipline – as this fine account confirmed.

The concert ended with Chôros No.10 (1926) that is another of the composer’s outsize yet, in this instance, most impressive pieces. Its subtitle “Rasga o coração” – translated figuratively as ‘Heartbreak’ – is that of an urban love-song from the period and whose theme insinuates itself into a texture already awash with evocations of the jungle as well as native intonations: the whole piece emerging as a confrontation, and ultimately ecstatic fusion, of the ‘primitive’ and ‘civilised’ facets of Brazilian culture that might well serve as an exemplar for what Villa-Lobos sought to achieve in the course of his prolific and eventful career. The members of BBC Symphony Chorus and Orchestra gave their collective all in a work whose impact is this time in absolute proportion to its substance, and with Oramo savouring those heady closing pages to the full.

The day as a whole was enhanced by the programme-book with its detailed and authoritative notes by Simon Wright (whose biography of Villa-Lobos is the standard study in English) as well as a list of key events in the composer’s life. Whether or not more of his works gain a footing in the repertoire, the sense of Villa-Lobos as a figure of stature and, above all, vision was reaffirmed by these concerts: a vision, moreover, of a potency that is all too often lacking in present-day music. This was an undoubted highlight of the BBC’s Total Immersion series so far.