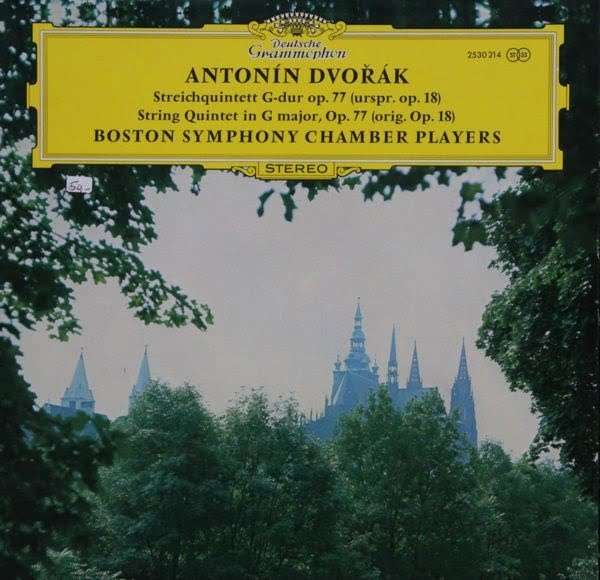 If these seemingly diverse releases have one thing in common (other than three of them featuring Russian performers) it is an old-world approach to interpretation that produces one superlative performance after another. In the case of the Dvořák we have one of the world’s great chamber ensembles (made up of principals from the Boston Symphony Orchestra) which was formed in 1964 and made a series of recordings for Deutsche Grammophon that included this suave, sophisticated account of an early Dvořák chamber work (the opus number is misleading).

The Quintet was composed in 1875 for string quartet with double-bass and published as Opus 18. When Dvořák revised it he removed the second-movement Intermezzo, but this performance quite rightly reinstates what is an exceptionally beautiful piece of music. Any successful account (and recording) has to ensure that the double bass does not overwhelm or muddy the sound and the rhythmic nature of much of the writing needs to be emphasised without compromising the singing melodic lines, which the Boston musicians do quite brilliantly; their bouncy, propulsive, but not over-fast tempo for the opening Allegro con fuoco gives them time to observe sforzandos and create rhythmic and melodic patterns that evoke Czech folk music.

In the discarded Adagio the players are suitably spacious and soulful, replete with luxuriant phrasing and natural rubato. Nor are they in a hurry in the Scherzo, where they spring the rhythms, relax the tempo for the Trio, and manage to sound both elegant and rustic. The tempo for the Andante is spacious, the phrasing beautifully fluid, the range of piano dynamics exceptional. In the Finale the basic tempo is swift, but they aren’t afraid to slow slightly in the second half of the first subject. There are earthier, less sophisticated ways of playing Dvořák, but in essence this is refined, civilised – yet truly felt – music-making, and carries the highest recommendation.

In terms of sound, any recording of this work must cope with the rich sonority a double bass brings. In the 1950s and 1960s DG would have struggled to do this, but unlike some other recording companies its sound improved with the advent of solid-state amplification, and on this LP the instrument has plenty of presence, is firmly placed within the image, and cleanly focused. One can say much the same about all of the instruments: they are anchored within a broad sound-stage which has depth and is nicely balanced. The sound also has bloom within an acoustic that has an ideal reverberation time, and, being analogue, timbres are caught in a way no digital recording can equal.

There are two slight criticisms. The upper treble is a little muted (but the same can be said of the CD transfer, so one presumes the master-tapes are at fault), and the dynamic range is restricted at forte and above, but that was – and is – a problem found on many chamber-music recordings. Nonetheless the overall effect is very natural. 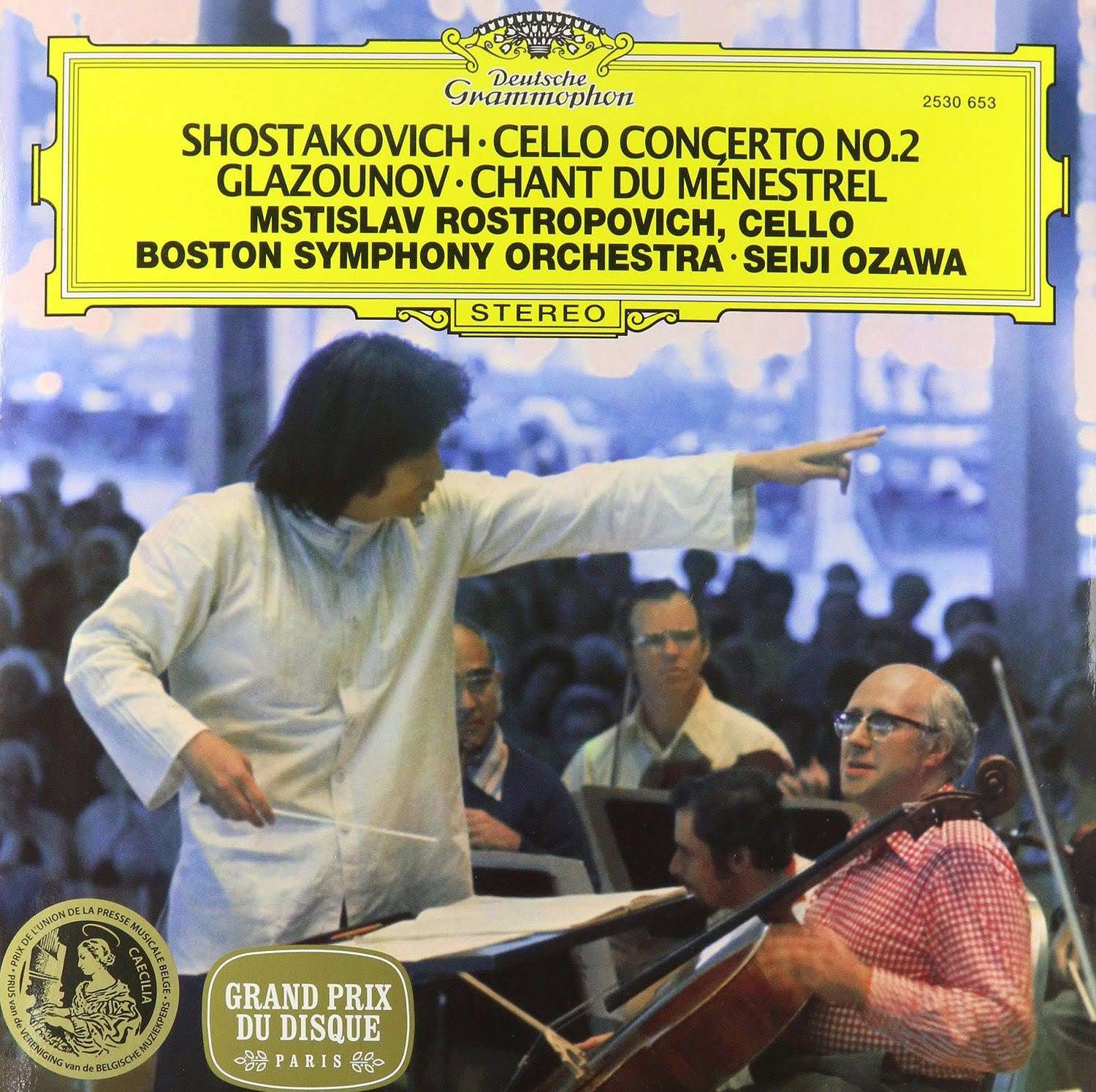 Any disc featuring arguably the greatest of cellists, Mstislav Rostropovich, in his heyday (he was 48 at the time of the recording) was an event, especially when this was the Western premiere recording of a work written for him by Shostakovich. Cello Concerto No.2 (1966) is prefaced by Glazunov’s pleasant Minstrel Song.

Shostakovich’s gloriously dark and introspective Concerto is scored for three bassoons (one doubling on a a contra), single flute and piccolo, two oboes and clarinets, strings, horns, harps, timpani and percussion. It would be difficult to imagine anything more sombre than the work’s opening where cello and strings intone low-held notes that gradually form into a sparse spectral theme that is interrupted by macabre, burlesque-like outbursts from the xylophone and upper-wind. Apparently the brief second movement is based on a street song and the Allegretto Finale ends in unresolved gloom and despondency. Throughout, Rostropovich effortlessly conveys every changing mood using a vast range of dynamic and tonal shading. His intonation is perfect, and he seems to make the bow disappear in an unbroken stream of introspection.

Seiji Ozawa secures marvellous orchestral playing from the Bostonians, but you know that any of the great Russian conductors, or that matter Bernstein or Previn, would have brought even greater bite and power to the score. Nevertheless, this is the finest studio version of the work; it is, however, a pity that DG’s engineers couldn’t produce equally fine sound.

Symphony Hall, Boston has a near-perfect acoustic, but for some reason the recording team (which had the same producer as the Dvořák) seems to have added reverberation, and there is little sense of space around the image. And while the overall balance is just about acceptably forward, the sense of perspective and inner balance is awry, in that the wind and assorted percussion move forward outside of tutti passages and the side drum and xylophone are sometimes given even greater prominence; the score also calls for two harps, but these are often inaudible, while Rostropovich seems to be sat forward of the conductor and completely dominates the sound-stage, which is disappointing. However, when compared to a first-label German pressing the Speakers Corner disc has more presence and a better defined bass response; which brings us to the Mercury LP, which is a fascinating example of ‘Cold War’ history.

Up until Stalin’s death in 1953 the Soviet Union was a virtual no-go area for Western musicians, but in the following decade there was a gradual thawing in relations which enabled companies such as Mercury to access Soviet talent, and after a lot of negotiating its mobile recording-studio van ended up outside the Great Hall of the Tchaikovsky Conservatory, Moscow. When the record appeared – as can be seen from the album cover – Mercury was not exactly backward about what it had done. The result is a triumph, in that as well as the multi-sized balalaika, there are also parts for instruments such as the domra, gusli and the exotically-named and -sounding Vladimir Shepherd’s Horn, all of which are played with incredible virtuosity. Much of the material is in ballad- or dance-form. The expressive range is large, the brass is wonderfully coarse, and this is an immensely entertaining disc, with wonderful sound. 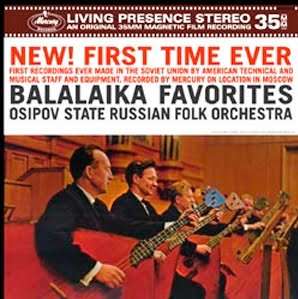 At its finest Mercury could produce state-of-the-art recordings, and here it pulled out all the stops. The balance is middle-distance, and other than for the accordion there is no spotlighting, and the balalaikas produce a glowing bed of rustling, vibrant sound. Clarity and definition are exemplary, which means the percussion is crisp and you can hear that the domra is being played with a plectrum. No register dominates, the treble is sweet, the bass extended; the whole sound-picture has real vibrancy and presence.

When Vladimir Horowitz walked onto the Carnegie Hall stage at 3.38 p.m. on this particular Sunday, it was headline news and CBS was there to record it. Maybe due to nerves, there were a lot of wrong notes, some of which were touched-up later or replaced with rehearsal sequences (the unedited recital is available on CD).

The challenging, richly eclectic programme opened with Busoni’s magnificent arrangement of J. S. Bach’s C-major Organ Toccata, where the first bar is an inaccurate scramble (apparently Horowitz asked for it to be retained), but what follows is a lesson in pedal, dynamic and rhythmic control. In the Schumann Fantasy Horowitz observes a high percentage of the dynamic markings, which makes the music sound very quixotic and volatile; there is however some stiff phrasing and articulation in the second movement, and the performance as a whole lacks the fluency of many of this pianist’s other accounts of the work. Scriabin’s ‘Black Mass’ Sonata is given a totally uncompromising, practically definitive reading, so too the more-romantic F-sharp minor Poem, where one again marvels at Horowitz’s total command of every aspect of technique and thereby expression. He ended the recital with Chopin, where the rhythmic finesse, split-hands and rubato belong to a sadly long-gone age. In the G-minor Ballade Horowitz seems to rewrite the score. Time and again, one hears rhythmic figures, inner parts and melodic lines highlighted in a way that is totally unique, thought-provoking and profoundly moving. There were four encores, all wonderful. 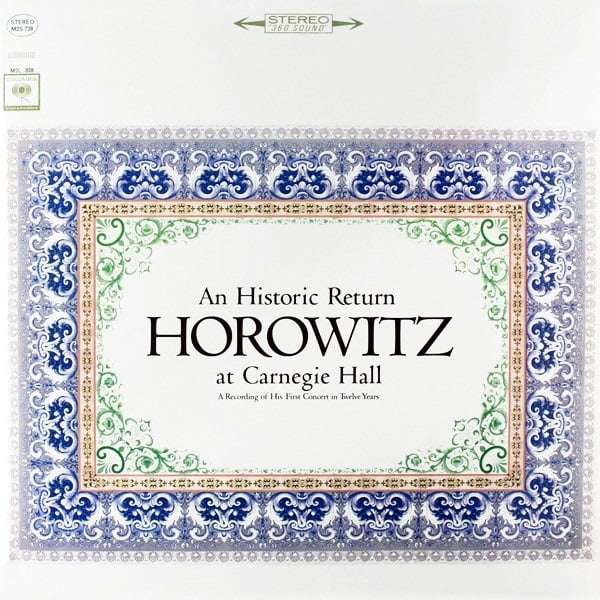 Before considering the sound there are two presentational issues. The spindle-hole on the first LP is too small, which shouldn’t happen on such an expensive product, and why doesn’t Speakers Corner provide windowed inner sleeves? surely at this price one shouldn’t have to mark them to know which disc is which.

Sound-wise, British first-label pressings were used for comparison, and one immediately hears more wow-and-flutter at the beginning of side 1 of the Speakers Corner pressing, but there is a similar problem on the Sony CD. Elsewhere, the new ones are slightly more forwardly balanced, have a greater dynamic range, the piano sound is bigger and they are cut at a higher level. There is excellent definition and clarity; however, particularly in the middle-register, the tone is harsher than on the original. With regard to applause, all of the versions severely truncate the minute-long standing ovation that greeted Horowitz’s entrance, which is unfortunate if the tapes have it complete, as it would have nicely set the scene. This release, while very different, is not superior to the original, but, as ever, availability and condition enter into the equation and here Speakers Corner wins hands-down.