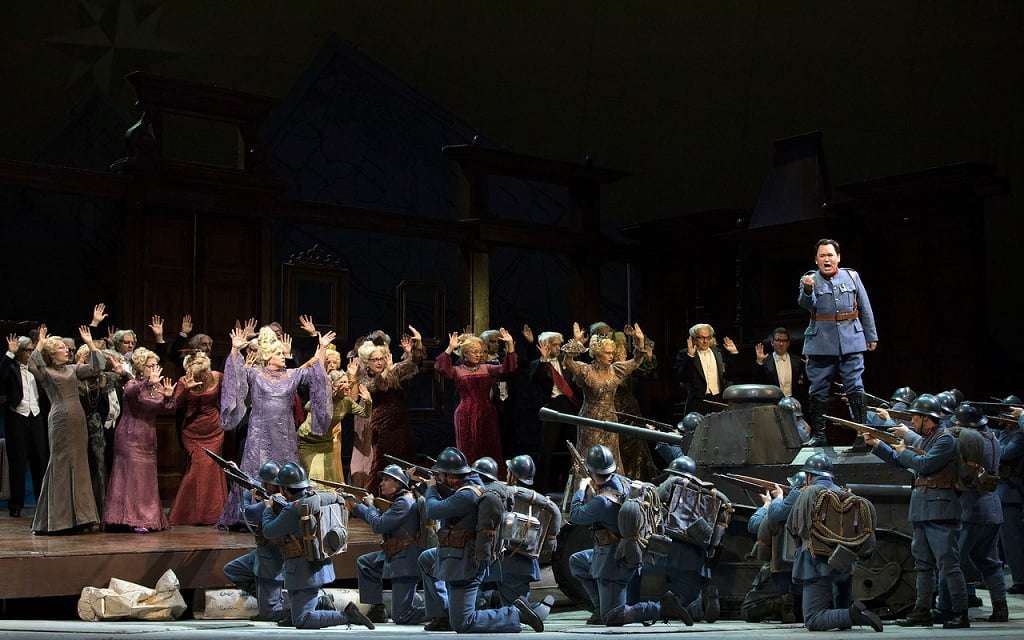 Who wrote it?
In a letter from October 1839 Gaetano Donizetti wrote that he was about to start rehearsals for his Poliuto at the Grand Opéra in Paris, but that he had just composed a further stage-work, orchestrated it and sent it to the Opéra Comique. It was intended for the debut of La Bourgeois (the soprano Juliette Bourgeois, sometimes known in Italy as Marie Borghese).
The premiere of La Fille du régiment was delayed until 11 October 1840. Donizetti was all the rage in Paris with some seven operas in or awaiting production. This riled a certain native composer, Hector Berlioz, to pen a particularly polemical review of the first performance who accused Donizetti of recycling music. Other critical voices were dismissive, commenting on the lack of musical unity, thereby adding some credibility to Berlioz’s assertions. Donizetti responded robustly in print (despite the fact he certainly did re-use material from his 1830 opera Il diluvio universale). No matter!
La Fille du régiment continues to delight in its original French version, and with extremely talented bel canto sopranos and tenors able to do full justice to their roles it has enjoyed a considerable renaissance of late. 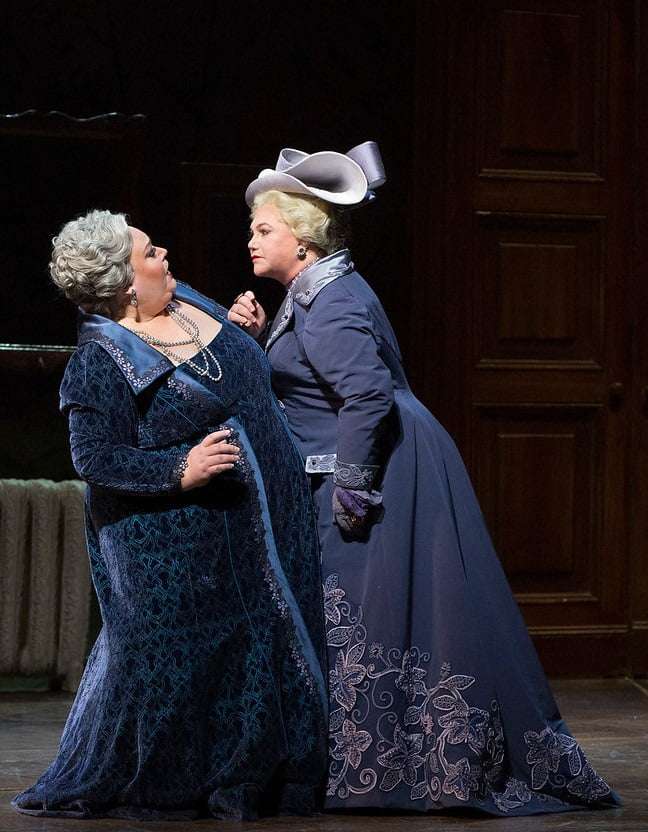 What’s it about?
The Tyrolean mountains at the time of the Napoleonic wars is the setting for the first Act. The Marchioness de Berkenfeld and her steward Hortensius are making their way back to her castle. Fearing further French attacks they take refuge in a village. They encounter Sergeant Sulpice of the French army who agrees to escort them to their destination. Sulpice is joined by Marie, and we learn she was found abandoned on a battlefield as a child and that she has been brought up by the regiment – her collective fathers.
Naturally, in this environment she is something of a tomboy, forthright and lacking in feminine delicacy. Marie confides in Sulpice that she has been seeing a young man who saved her from a deathly fall whilst she tried to pick a wild flower. Her fathers bring in the said man, Tonio, as a captive; he has been seen spying around the camp. She tells of his bravery, all drink to him and she sings the regimental song. The pair declares their love, but when Sulpice states that Marie can only marry a member of the regiment, Tonio enlists.
The Marchioness and Sulpice discuss her escort and it transpires that the Marchioness’s sister was the mistress of Captain Robert, now deceased, and they had a child, now lost. It becomes apparent that the Marchioness is Marie’s aunt and the two are introduced. The Marchioness is appalled at Marie’s behavior and asserts her authority as her guardian: Marie must leave the regiment and live in the castle. Marie and Tonio are distraught at their separation, for he must now serve his regimental term.

The second Act is at the castle where Sulpice now also lives having retired following a battle injury. The Marchioness reveals to him that she has arranged a marriage between Marie and the son of the fearsome Duchess of Krakenthorp. The Duchess will soon arrive to vet the potential bride. Meanwhile Marie is struggling to adapt to life as a society lady.
When the Marchioness invites Sulpice to attend Marie’s singing and dance lesson he rather unsubtly encourages her to embellish the music with regimental songs. Military music is suddenly heard in the distance and Tonio, now an officer, leads Marie’s old regimental fathers into the castle. They are informed of the imminent nuptials and dismissed by the Marchioness, who then confides to Sulpice that Marie is in fact her illegitimate daughter and that the proposed marriage will ensure restoration of Marie’s rightful aristocratic heritage to her.
Marie, when told this by Sulpice, dutifully agrees to the arranged marriage but in the nick of time Tonio and the regiment interrupt proceedings to rescue their ‘daughter’. Marie’s former life is explained to the Duchess who is outraged and refuses to allow the ceremony. The Marchioness agrees that Tonio can marry Marie amidst general rejoicing. 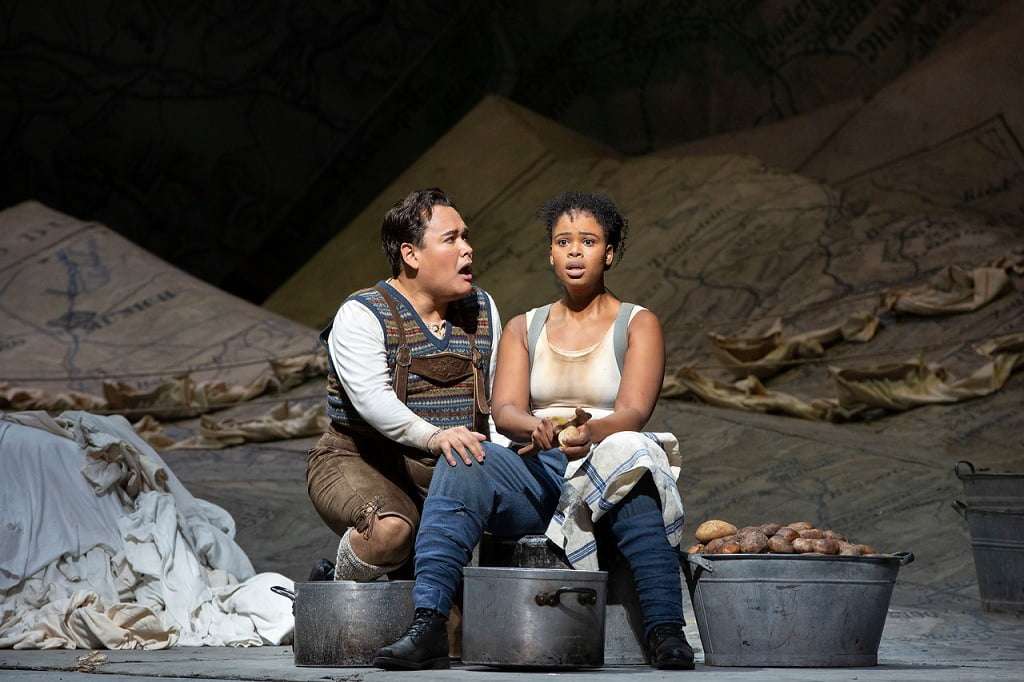 Look out for…
Donizetti was a master of sparkling and tuneful music, full of flair. The Overture opens with horn-calls and pastoral woodwind as befits the mountain setting, before switching to a military song. The trio of Marie, Tonio and Sulpice get the vocal plums. Marie has several great showpiece moments – not least the soliloquy ‘Par le rang et par l’opulence’ one of the pathos-rich moments where the opera becomes emotionally involving. This is preceded by the famously comedic singing lesson – a classic device in Italian domestic operas from Rossini and others. The piano accompaniment should ideally be played by the singer playing the Marchioness.
Tonio has a show-stopping aria with chorus ‘Ah! Mes amis, quell jour de fête’ with its treacherous string of top-Cs, and the Marie-Tonio-Sulpice reunification trio in the second Act is a delightful confection requiring great precision to be fully effective.

Who’s in it?
The Met has assembled a great cast! Pretty Yende sings Marie and Javier Camarena Tonio, exhibitionist roles, and their partnership is keenly anticipated. Sulpice is played by Maurizio Murano and the Marchioness by fruity-voiced Stephanie Blythe. In the spoken cameo role of the Duchess the Met has engaged the film actress Kathleen Turner. Enrique Mazzola conducts Laurent Pelly’s charmingly wacky production.

When’s it on?
If you are in New York City then the matinee is live at the Met itself. Otherwise it is broadcast to cinemas on March 2.