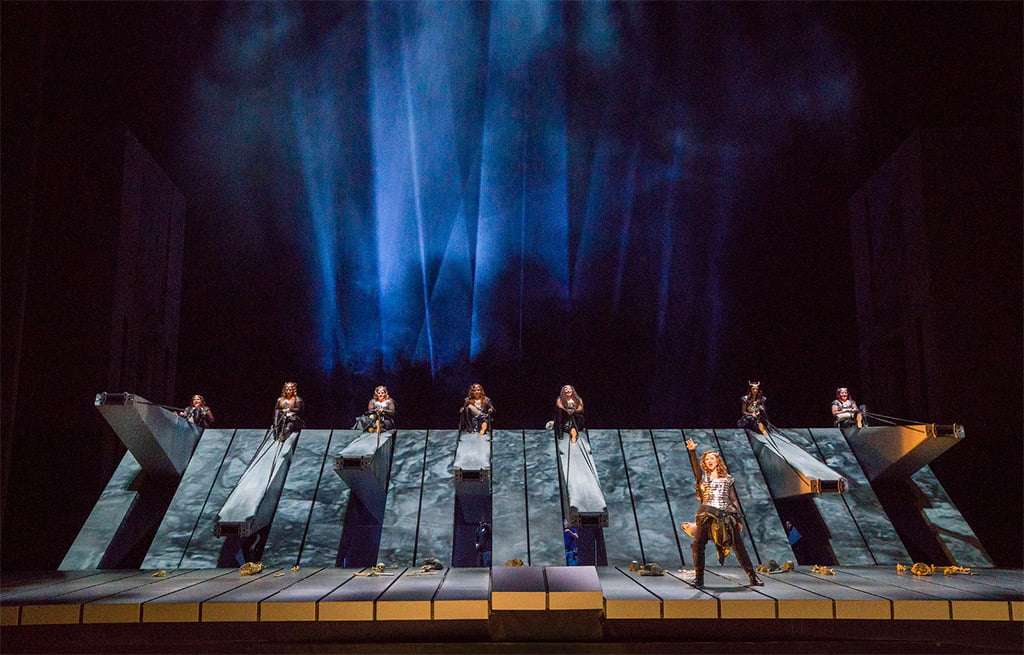 Who wrote it?
Die Walküre is the second music-drama, and arguably the most accessible, of the huge tetralogy of works that comprise Der Ring des Nibelungen, one of the most elaborate compositions of western classical music. The story of The Ring is an adaptation of various Norse and other legends which Wagner started to work on with a sketchy prose draft in about 1851.
Compositional work on Die Walküre started in 1852 and the full score was completed in early 1856. It took some time for the first performance owing to the huge forces and scenic demands and thus the expense involved – the first performance was at the Nationaltheater in Munich in 1870.

Die Walküre is one of the most popular of Wagner’s stage-works for it is the first time in The Ring that the world of humans is depicted and where the interplay between humanity and the gods comes into play. It includes an incestuous love-affair at its core, a major challenge to the moral conventions of its time. Wagner was never far away from controversy, and indeed held some fairly unsavoury views on many things. Walküre’s scale, brilliance and influence, whether one considers this favourable or otherwise, cannot be denied. 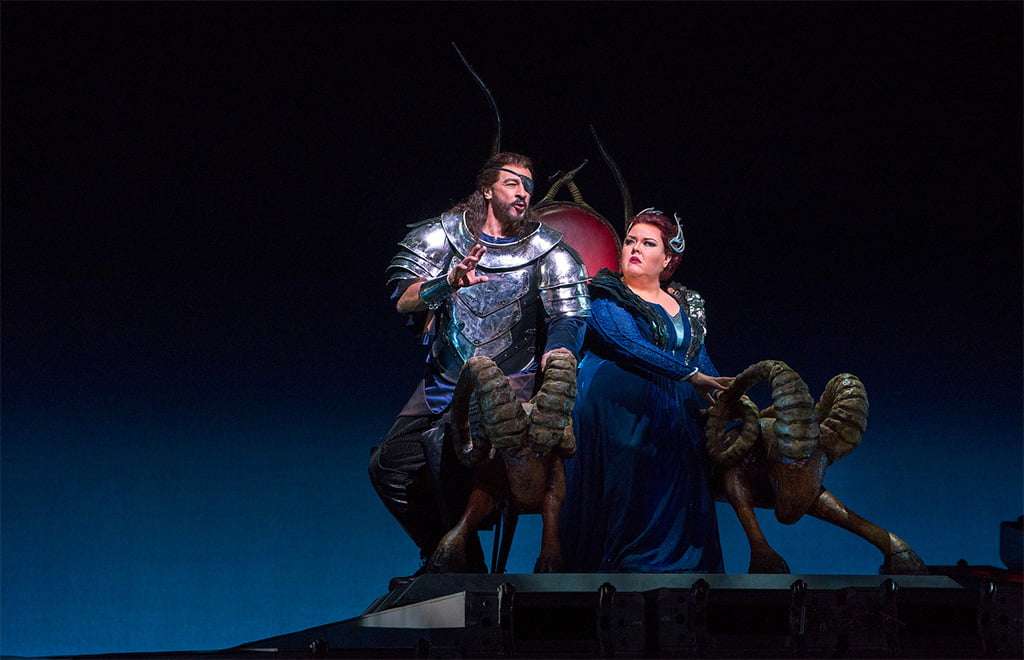 In the preliminary evening of The Ring, Das Rheingold, we saw how a broken bargain between the Gods and Giants over the building of Valhalla forced Wotan to steal a ring of power from the Nibelung Alberich. Alberich had previously stolen the gold from the waters of the Rhine. He had to curse love to fashion the gold into the ring. After Wotan stole it Alberich cursed all future wearers with certain death until the ring once again reaches his hands. Only its return to the waters of the Rhine can cleanse the gold of the curse.
On the advice of the Earth-Goddess Erda, Wotan relinquished the ring to Fasolt, one of the giants, who was promptly killed by his brother Fafner, Fafner now guards the ring in a forest, having magically transformed himself into a dragon.

In Act One a man enters a house whilst being pursued in a storm by his enemies. The lady of the house tends him. They are strangely attracted to one another. She persuades him to stay as her husband Hunding arrives. Hunding is hostile but offers shelter. As they take food the stranger tells his tale. He was brought up by his warlike father along with his sister until tragedy struck, and is now an outlaw. Hunding reaffirms hospitality overnight, but locking the doors challenges the stranger to combat the following day. He and his wife retire leaving the stranger to muse on his predicament.
Hunding’s wife has drugged her husband. She tells of her past – she was forced into marriage. At her wedding feast a stranger interrupted and thrust a sword into the ash tree growing in the house. Nobody has ever managed to draw it from its unusual scabbard. Suddenly the doors fly open. The stranger draws the sword from the tree naming it Nothung’ (sword of need) and recognizing their sibling nature they reveal their true names, Siegmund and Sieglinde, and flee.
In Act Two we again meet Wotan, and his daughter Brünnhilde who is a Valkyrie. Wotan is celebrating the union of Siegmund and Sieglinde (his offspring by a mortal woman), for he has attempted to bring up a fearless hero-warrior, innocent of his past and heritage, to recapture the ring. However, Wotan’s true wife Fricka appears in anger, as Hunding has invoked her divine aid. Not only has Wotan been unfaithful to their marriage bonds but he is flagrantly condoning marital faithlessness and incestuous love. She forces Wotan to withdraw all support for Siegmund. Wotan’s confides his despair to Brünnhilde but nonetheless orders her to fight for Hunding. Brünnhilde appears to Siegmund to warn him of his impending death. He rejects this when he learns that Sieglinde will not accompany him to this afterlife and threatens to kill her as she sleeps.
Brünnhilde, amazed by his love, fidelity and bravery has a change of heart. Defying Wotan’s order she tries to defend him when he fights Hunding, but Wotan intervenes, shattering Nothung and leaving Siegmund to die on Hunding’s spear. In rage, Wotan kills Hunding as retribution. Brünnhilde flees with Sieglinde gathering the sword fragments. 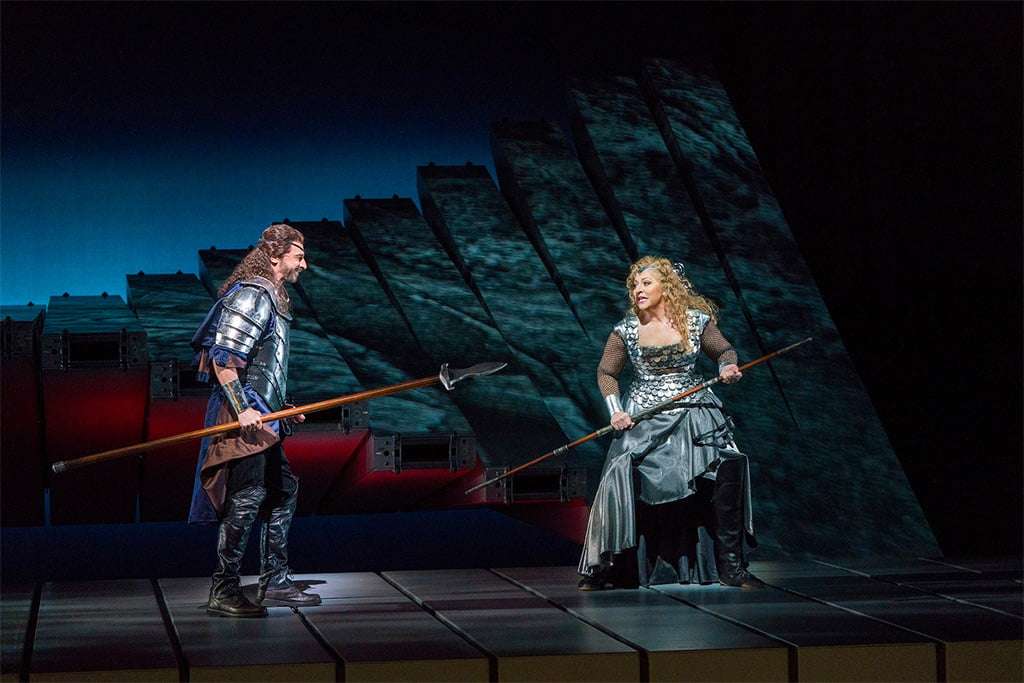 In Act Three Brünnhilde brings Sieglinde to the rock where she and her sisters usually meet before riding to Valhalla on their winged horses. She asks them to protect her so that Sieglinde can escape. However, the traumatised Sieglinde wants only death, until Brünnhilde tells her she is carrying Siegmund’s son in her womb, urges her to nurture the unborn son – whom she names prophetically as Siegfried.
The Valkyries try to shield Brünnhilde but are dismissed by Wotan. Left alone Brünnhilde tries to explain her actions and to quell Wotan’s wrath. She gradually brings him round, but he tells her she must take her punishment. She will lose her godly attributes, be left in sleep on the rock and become the wife of the first man who wakes her. Brünnhilde makes a plea. Her husband must be a hero and Wotan must surround the rock with a fire impenetrable to all who know fear.
Wotan capitulates. He places her in sleep on the rock, and summons Loge, the God of fire, to provide the protection he has granted.

Look out for…
Die Walküre includes ‘Ride of the Valkyries’ (most famously used in Coppola’s Apocalypse Now). In this work Wagner’s use of specific phrases and rhythms and his development of them as signposts to objects, people and emotions becomes ever more complex and brings a lot of emotion to bear and which supports the text. Act One includes the duet between the sibling lovers, Sieglinde’s narration of her interrupted wedding feast, and Siegmund’s ecstatic welcome to Spring.
Brünnhilde’s battle cry near the start of the second Act is an obvious taster to the ‘Ride’ and the scene where she announces Siegmund’s death to him is important. Fricka and Wotan’s argument is a critical moment both musically and dramatically. The final twenty-five minutes of the work where Wotan relents and bids a loving yet sad farewell to his daughter is as emotionally charged as opera comes, and scenically demands spectacular staging.

Who’s in it?
The production is a revival of Robert Lepage’s staging in the monumental designs of Carl Fillion. There is a great cast of seasoned and emerging Wagnerians. Stuart Skelton sings Siegmund and he is partnered by Eva-Maria Westbroek as Sieglinde. Greer Grimsley reprises the role of Wotan, a part he has been singing to acclaim for decades. Jamie Barton will be a luscious-voiced and imperious Fricka, and Christina Goerke takes the demanding role of Brünnhilde. Günther Groissböck, already a Wagnerian of note, is Hunding. Philippe Jordan conducts.

When’s it on?
If you are in New York City then the matinee is live at the Met itself. Otherwise it is broadcast to cinemas on March 30.